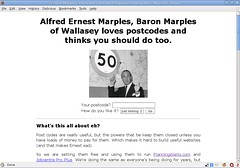 Harry Metcalfe and Richard Pope recently let us know about their new postcode lookup API, named after Ernest Marples, the Postmaster General who introduced the Postcode:

More about the service:

Post codes are really useful, but the powers that be keep them closed unless you have loads of money to pay for them. Which makes it hard to build useful websites (and that makes Ernest sad).

So we are setting them free and using them to run PlanningAlerts.com and Jobcentre Pro Plus. We’re doing the same as everyone’s being doing for years, but just being open about it.

If you know of any other postcode-related open datasets, we’d love to hear about them!