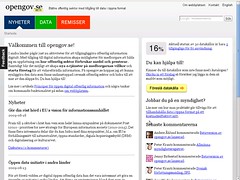 Opengov.se is a registry of open government data in Sweden:

Opengov.se is an initiative to highlight available public datasets in Sweden. It contains a commentable catalog of government datasets, their formats and usage restrictions.

It makes a note of what percentage of the datasets are fully open – i.e. material that is free for anyone to re-use and re-distribute without restriction, and that is in an open format. This is currently at 16%, or 5 out of a total of 30 datasets. The open datasets can be viewed at:

Peter Kranz, who runs the site, has been contacted by both civil servants that want help with open data plans and politicians that want advice on how legislation should change to increase the amount of open government data.

He became interested in open government data, after starting to build eurlex.nu, a commentable semantic web version of European Union Legal Information. He was frustrated by the state of existing official websites, so decided to build a new version of the site – but found that he’d have to pay 10,000 Euros to access the data plus 3,000 EUR for each additional language.

As with other European countries, many agencies in Sweden charge for access to raw data. For example, SMHI, the Swedish Meteorological and Hydrological Institute, charges for access to weather data. As a result, people using weather information in their applications get data from the Norwegian authorities instead.

Peter decided to build Opengov.se after getting involved in the W3C EGovernment Interest Group and the US based Open Gov Data group – and realising that there weren’t any open goverment data initiatives in Sweden.

He is currently planning to scrape proposed bills and public consultations from the Swedish central government website – to create something like a Govtrack “light”.

We’ve added an se-opengov package to CKAN – and you can see the ‘country-sweden‘ for other Swedish open documents and datasets:

8 thoughts on “Opengov.se – a registry of open government data in Sweden”