The following guest post is from Christina Angelopoulos at the Institute for Information Law (IViR) and Maarten Zeinstra at Nederland Kennisland who are working on building a series of Public Domain Calculators as part of the Europeana project. Both are also members of the Open Knowledge Foundation’s Working Group on the Public Domain. 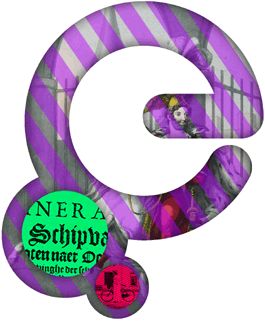 Over the past few months the Institute for Information Law (IViR) of the University of Amsterdam and Nederland Kennisland have been collaborating on the preparation of a set of six Public Domain Helper Tools as part of the EuropeanConnect project. The Tools are intended to assist Europeana data providers in the determination of whether or not a certain work or other subject matter vested with copyright or neighbouring rights (related rights) has fallen into the public domain and can therefore be freely copied or re-used, through functioning as a simple interface between the user and the often complex set of national rules governing the term of protection. The issue is of significance for Europeana, as contributing organisations will be expected to clearly mark the material in their collection as being in the public domain, through the attachment of a Europeana Public Domain Licence, whenever possible.

The Tools are based on six National Flowcharts (Decisions Trees) built by IViR on the basis of research into the duration of the protection of subject matter in which copyright or neighbouring rights subsist in six European jurisdictions (the Czech Republic, France, Italy, the Netherlands, Spain and the United Kingdom). By means of a series of simple yes-or-no questions, the Flowcharts are intended to guide the user through all important issues relevant to the determination of the public domain status of a given item.

The first step in the construction of the flowcharts was the careful study of EU Term Directive. The Directive attempts the harmonisation of rules on the term of protection of copyright and neighbouring rights across the board of EU Member States. The rules of the Directive were integrated by IViR into a set of Generic Skeleton European Flowcharts. Given the essential role that the Term Directive has played in shaping national laws on the duration of protection, these generic charts functioned as the prototype for the six National Flowcharts. An initial version of the Generic European Flowchart, as well as the National Flowcharts for the Netherlands and the United Kingdom, was put together with the help of the Open Knowledge Foundation at a Communia workshop in November 2009.

Further information necessary for the refinement of these charts as well as the assembly of the remaining four National Flowcharts was collected either through the collaboration of National Legal Experts contacted by IViR (Czech Republic, Italy and Spain) or independently through IViR’s in-house expertise (EU, France, the Netherlands and the UK).

Both the Generic European Flowcharts and the National Flowcharts have been split into two categories: one dedicated to the rules governing the duration of copyright and the sui generis database right and one dedicated to the rules governing neighbouring rights. Although this division was made for the sake of usability and in accordance with the different subject matter of these categories of rights (works of copyright and unoriginal databases on the one hand and performances, phonograms, films and broadcasts on the other), the two types of flowcharts are intended to be viewed as connected and should be applied jointly if a comprehensive conclusion as to the public domain status of an examined item is to be reached (in fact the final conclusion in each directs the user to the application of the other). This is due to the fact that, although the protected subject matter of these two categories of rights differs, they may not be entirely unrelated. For example, it does not suffice to examine whether the rights of the author of a musical work have expired; it may also be necessary to investigate whether the rights of the performer of the work or of the producer of the phonogram onto which the work has been fixated have also expired, in order to reach an accurate conclusion as to whether or not a certain item in a collection may be copied or re-used.

A variety of legal complexities surfaced during the research into the topic. Condensing the complex rules that govern the term of protection in the examined jurisdictions into a user-friendly tool presented a substantial challenge. One of the most perplexing issues was that of the first question to be asked. Rather than engage in complicated descriptions of the scope of the subject matter protected by copyright and related rights, IViR decided to avoid this can of worms. Instead, the flowchart’s starting point is provided by the question “is the work an unoriginal database?” However, this solution seems unsatisfactory and further thought is being put into an alternative approach.

Other difficult legal issues stumbled upon include the following:

On the national level, areas of uncertainty related to such matters as the British provisions on the protection of films (no distinction is made under British law between the audiovisual or cinematographic work and its first fixation, contrary to the system applied on the EU level) or exceptional extensions to the term of protection, such as that granted in France due to World Wars I and II or in the UK to J.M. Barrie’s “Peter Pan”.

Once the Flowcharts had been prepared they were translated into code by IViR’s colleagues at Kennisland, thus resulting in the creation of the current set of six web-based Public Domain Helper Tools.

Technically the flowcharts needed to be translated into formats that computers can read. In this project Kennisland choose for an Extensible Markup Language (XML) approach for describing the questions in the flowcharts and the relations between them. The resulting XML documents are both human and computer readable. Using XML documents also allowed Kennisland to keep the decision structure separate from the actual programming language, which makes maintenance of both content and code easier.

Kennisland then needed to build an XML reader that could translate the structures and questions of these XML files into a questionnaire or apply some set of data to the available questions, so as to make the automatic calculation of large datasets possible. For the EuropeanaConnect project Kennisland developed two of these XML readers. The first translates these XML schemes into a graphical user interface tool (this can be found at EuropeanaLabs) and the second can potentially automatically determine the status of a work which resides at the Public Domain Works project mercurial depository on KnowledgeForge. Both of these applications are open source and we encourage people to download, modify and work on these tools.

It should be noted that, as part of Kennisland’s collaboration with the Open Knowledge Foundation, Kennisland is currently assisting in the development of an XML base scheme for automatic determination of the rights status of a work using bibliographic information. Unfortunately however this information alone is usually not enough for the automatic identification on a European level. This is due to the many international treaties that have accumulated over the years; rules for example change depending on whether an author is born in a country party to the Berne convention, an EU Member State or a third country.

It should of course also be noted that there is a limit to the extent to which an electronic tool can replace a case-by-case assessment of the public domain status of a copyrighted work or other protected subject matter in complicated legal situations. The Tools are accordingly accompanied by a disclaimer indicating that they cannot offer an absolute guarantee of legal certainty.

Further fine-tuning is necessary before the Helper Tools are ready to be deployed. For the moment test versions of the electronic Tools can be found here. We invite readers to try these beta tools and give us feedback on the pd-discuss list!

Note from the authors: If the whole construction process for the Flowcharts has highlighted one thing that would be the bewildering complexity of the current rules governing the term of protection for copyright and related rights. Despite the Term Directive’s attempts at creating a level playing field, national legislative idiosyncrasies are still going strong in the post-harmonisation era – a single European term of protection remains very much a chimera. The relevant rules are hardly simple on the level of the individual Member States either. In particular in countries such as the UK and France, the term of protection currently operates under confusing entanglements of rules and exceptions that make the confident calculation of the term of protection almost impossible for a copyright layperson and difficult even for experts. 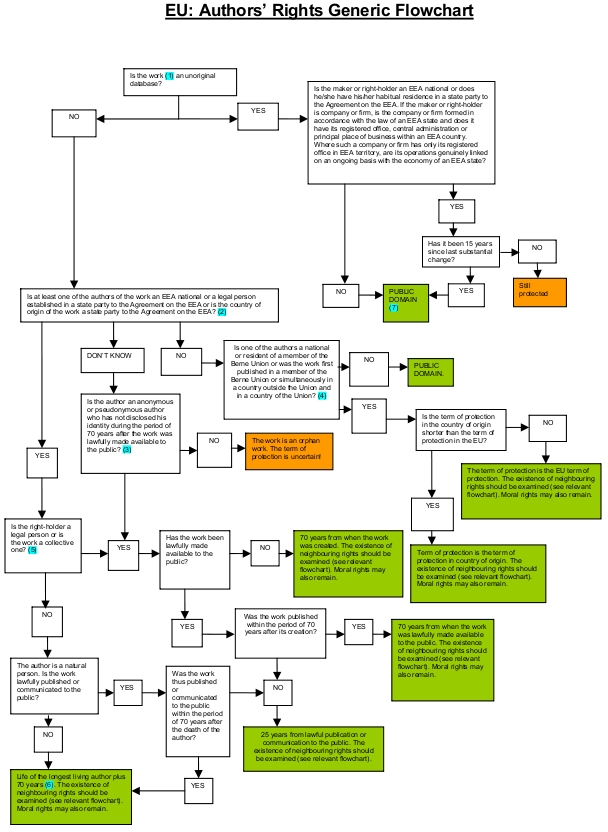 One thought on “Public Domain Calculators at Europeana”