The following guest post is from Jonathan Van Parijs at the Where’s My Villo? project.

After Paris, Barcelona and a growing number of cities around the world, Brussels inaugurated its bike-sharing scheme in May 2009, called Villo!.

By far the most convenient way to travel short distances, and part of local
governments’ initiative for promoting eco-friendly transport, these schemes have
proven to be tremendously popular. Due to local authorities reluctance to take on
the burden of cost and management themselves, more often than not, the large-
scale bike-sharing schemes are being run through public-private partnerships with
advertising companies. As the outdoor advertising space in cities is near saturation,
these companies are natural candidates for the schemes, where they already operate
the ad-financed bus stop shelters and other billboards. Bike sharing schemes are a
strategic way for them to increase their presence in cities. Villo! is operated by the
French advertizing firm JCDecaux.

The company finances the infrastructure and operates the bike sharing scheme,
in exchange for advertising space on the bikes themselves and on billboards at the
stations.

The context of this specific public-private partnership is very appealing: citizens get
access to an extremely practical service, at little cost to them or to local authorities.
However, as the popularity of the scheme increased, Villo!’s usefulness became
increasingly tainted by the all too frequent unavailability of bikes and parking spaces,
to the extent that many stations became virtually unusable. Villo! just wasn’t doing its
job of reallocating bikes often enough.

Given that the public-private partnership JCDecaux has established with Brussels
through Villo! generates both revenue and reputational capital for the company, it is
our feeling that JCDecaux has a special responsibility to ensure that the service is run
efficiently, rather than trying to get away with the bare minimum.

Villo! makes real-time data available about the status of each station on their servers.
This is to help users find out which stations have bikes or free parking spaces.
Where’s My Villo?, launched in September to pressure
JCDecaux into doing a better job, uses this data to shed light on the magnitude of the
problems. By pulling data from Villo!’s servers every five minutes and writing them
to a database, Where’s My Villo? computes a daily list of the worst places to find a
bike or park one. The website also allows visitors to see how well the station(s) they
use most frequently perform, and report their own encounters with problems (from
finding a bike to technical problems at stations).

Though we will need more time to determine whether JCDecaux have really
improved the scheme, they have publicly announced they will be
rolling out a number of improvements, among them, reshuffling of bikes at night.

First, JCDecaux’s claims aimed at minimizing the magnitude of the problems could
no longer be taken seriously. Second, overwhelming support from Villo! users and
over 700 people on Facebook meant the initiative channeled a widening feeling of
discontent, which could not be ignored. Finally, and this may be open data’s most
important contribution, it relieved local authorities from being the sole monitors of
the partnership and gave them additional leeway to demand improvements from
their private partner. Though we have been told there had been complaints from
citizens about the scheme’s performance, the authorities were not in a position to
quantify the extent of the problems. And as signatories of the partnership, were in the
tricky position of managing the relationship with their partner and needing to defend
a project criticized by the political opposition.

Though anecdotal in many ways, Where’s My Villo?’s experiment shows that open-
data allowing citizens to monitor the performance of a service of which they are the
final users should be required in all public-private partnership contracts. Down the
line, this may even play an ex-ante role by discouraging companies who intend to
deliver frivolous services from chasing public-private contracts, as well as allowing
citizens to demand better service ex-post. 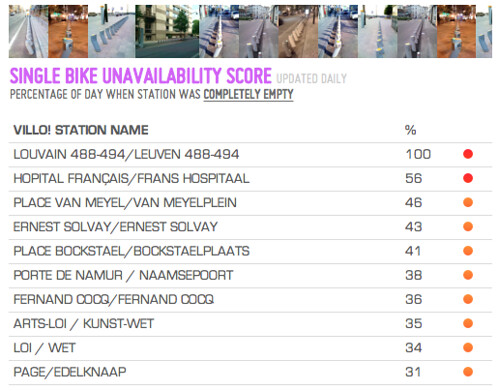