The following guest post is by Daniel Kaplan, Director of Fing (the Next-Generation Internet Foundation, France). On Friday he mapped three possible futures for Open Public Data, and today he suggests ways to ensure we will avoid some of the dangers he highlighted.

One may believe that one of the three scenarios for the future of Open Public Data that I discussed in my previous post is more likely than the other. The problem is, why? What actions, decisions, or conditions, are more likely to get us going along one road rather than the other? Can we go wrong on one count, and right on another? I believe we have hardly begun to figure that out.

Yet we need to, otherwise we may be in for a backlash. There are many ways to open access to data, and many ways to accompany it. If, for example, open data is only seen as a way to reduce public spending by transferring the provision of public services to the private sectors (or event to the voluntary sector), then chances are the rising inequalities and the vicious circles described in the “dark side” story will indeed become realities.

We need to discuss a number of really tough questions. How should the role of public agencies evolve when companies and citizens are empowered by the data that they produce? What should be done (and by whom) in order to raise everyone’s capability to engage with data? What are the boundaries of transparency – are they privacy, security, or the ability to quietly ponder tough decisions, or should there be none at all? How will we finance the production of “public domain” data? How do we develop a “culture of data” that is also able to discuss how the raw data themselves are created? – because in fact, we have known since Einstein (and probably earlier) that there is no such thing as “raw” data, if by “raw” we mean data provided to us as nature made the phenomenon it is supposed to represent.

###Another take on some challenges posed by Open Government Data

In an excellent 2010 report, “Open data, democracy and public sector reform”, Tim Davies of Practical Participation raised 4 challenges out of his observation of how “Open Government Data” (OGD) is used, and by whom:

1.”Data is not just for developers”: We should think of interfaces that allow everyone to peer into the data in ways that fit his or her needs – However, interfaces themselves are not neutral…

2.”OGD changes the gatekeepers, and the role of civic actors”: “Government, can retain some gate-keeping power by setting the categories and structure in which data is recorded and released. There will be greater need in future for capacity both in state and society to be able to debate the meaning of data”

3.”OGD supports innovation in public services – although it is not yet clear that there are strong models for the use of OGD in allowing communities to collectively debate and drive local change. Social and commercial entrepreneurs play a core role at present in turning OGD into new services or inputs into public services.”

4.”A focus on digitizing government underlies much OGD use, and can lead to concerns of politics, power and justice being under-valued in the development of OGD infrastructure”.

The former is just an initial list. Many more issues will emerge as governments, local authorities, research labs and even corporations make more data available for reuse, and as citizens, firms, activists, researchers, lobbyists and artists scrutinize them, discuss them, add to them, and make interesting or distressing use of them. Actually, one of the ways to move forward in identifying and addressing the issues that will arise is to think in terms of actors: Who is impacted, who has a stake in the production, the release, the understanding, or the reuse of what data? Open or not, data does not float around in an anonymous space, rather in fields of force where interests, habits, capabilities, co-operate and conflict with one another. Nobody is empowered by them in the same way. 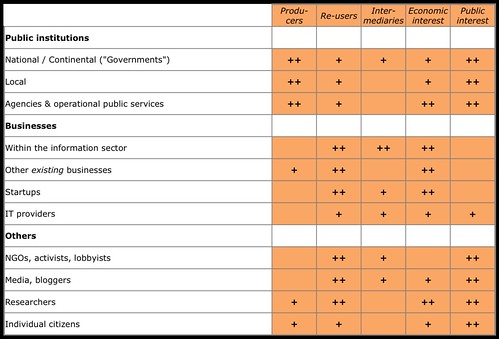 We can also think in terms of levers, that is, decisions, structures and actions that can (hopefully) influence what the opening of public data results in.

Some of these levers are well identified, because they naturally emerge when one starts thinking of releasing data: The release conditions (licensing and pricing), the funding mechanisms of specialized data producing public agencies, and the stimulation of a re-user “ecosystem”. Organizing competitions in order to stimulate entrepreneurs and activists is good, but how could we reach out to communities who are less aware of the possibilities? Should we organize workshops or training sessions, not for geeks, but for media, community groups, non-digital SMEs? Should we support some potential re-users more than others? How could we think of interfaces that facilitate access to data by non-specialists, while remaining as neutral as possible as to how data should be interpreted? Who should build them? How should public agencies use Open Data themselves, in order not to be relegated to producing raw material that others will transform?

Some levers are probably more political still, and call for broader vision and action. How can we promote a “culture of data” and avoid the emergence of a “data divide” that would separate those who are empowered by data, from those who might feel even more alienated from the world than they are today? Should this “culture of data” include some thinking about the right level of transparency for public (and private) actions? Actually, what about private data – I’m reminded of Adam Greenfield asking for data produced by sensors installed by companies in public urban space to be made public? And what should we do about crowdsourced data provided by citizens themselves? What, in fact, is the role of public players in regulating and stimulating Open Data in general?

Again, this list is not closed. In fact, the point of these posts is to open it. Let’s discuss what comes after opening up access to public data, so as to make sure that 10 years from now, we can be really proud we were part of that movement.