The following guest post is by Iolanda Pensa, the scientific director at WikiAfrica and Share You Knowledge.

Defining “African knowledge” is so difficult that it probably takes less time to share it.
Talking about African knowledge is to talk about a wide range of controversial issues.
Colonial history, diaspora, migrations, borders, restitutions, power dynamics, the way the
African continent is (not) represented, the possibility for African pupils to access books and
educational materials, the chance for all pupils to access
information, and our capacity to build a common knowledge that contemplates all points
of view in a neutral way. I often like to think of the British-Indian-Pakistani artist and
intellectual Rasheed Araeen who joined the Black Panthers in the Seventies because at the
time – and I’m surely going to say it in an over-simplistic way – it represented fighting for
power and freedom.

When we talk about African knowledge everybody is concerned. We are talking about the
collections of world museums, about the world population, and even about the coltan inside the
computer I’m using right now. Sharing African knowledge is something everybody can contribute
to. And – great news – we have two tools that already facilitate the job: Creative Commons
and Wikipedia.

In 2006 the lettera27 foundation launched the project WikiAfrica. The mission of lettera27 is
to support education, literacy, and access to knowledge all over the world – but in particular
in the most disadvantaged areas. Africa is the continent with the lowest literacy rate: it is the
least connected and the least represented on the Internet. Wikipedia is THE contemporary
source of information, it is the world’s biggest non-profit non-organisation and an incredibly
powerful educational tool. Contributing to Wikipedia requires a specific literacy and it
produces international multilingual anonymous mainstream (but negotiable) knowledge. 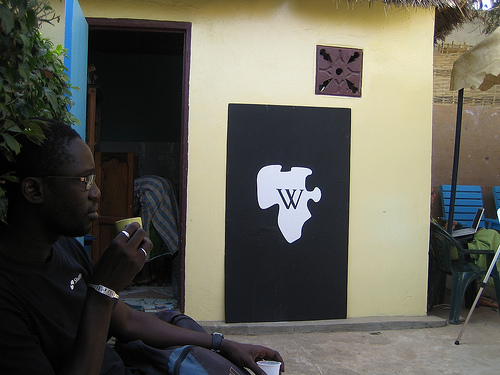 After supporting research projects, presentations and training, at the end of 2009 lettera27
decided to produce 30,000 African contributions to Wikipedia by 2012. To achieve the
goal WikiAfrica focuses on cultural institutions. Museums, NGOs, foundations, festivals,
research institutes and publishers have archives, collections, biographies and film
descriptions they can share on Wikipedia and Wikimedia projects. They are valuable first points-of-contact – they can involve their staff, collaborators and public to use their contents to enrich
the online encyclopedia, and they are interested in reaching a wide audience and make
their contents more accessible (as we’ve already found out).

We wanted to involve African institutions immediately, but it was not easy. There
are Creative Commons guidelines for individuals but not really for small and medium-
sized cultural institutions with an heterogeneous documentation. Same problem with
Wikipedia: “no problem” if you want to upload a large amount of public domain images
but quite some troubles if you have a little of this and a little of that. How can you figure out
which documentation belongs to you as an institution? Who can take the decision to adopt
the CC BY-SA license in a museum? How can an NGO produce an agreement with its
collaborators that allows it to use their images and publish them on wikimedia commons? 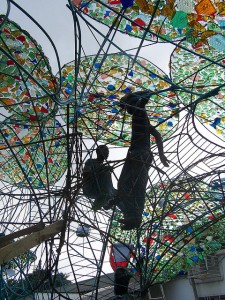 So in January 2011 we started Share Your Knowledge. An initial pilot phase would include 10 institutions, expanding to 50 by 2012. The institutions
(museums, research centres, archives, festivals, foundations, publishers, organisations
working on cooperation and development) are asked to contribute to the GLAM project; to specify a number of items they will
make available with a CC BY-SA license (or in the public domain) and with
which they will contribute to WikiAfrica; and to sign a letter in which they express their
support of knowledge-sharing.

All this is done in collaboration with a lot of people and institutions. Wikimedia
Italia has been contributing to WikiAfrica since 2006, the Africa Centre based in Cape Town
became a main partner in January 2011, and the NEXA Center for Internet and Society at
Politecnico di Torino and the Cariplo Foundation joined Share Your Knowledge in 2011, along with all the other institutions which we
need to thank and which you can find listed here. We also benefit from the work of
two tutors, two lawyers, a wikipedian in residence, a wide number of wikimedian and
wikipedian volunteers, and the expertise of a team of external evaluators and people that
just pass by and help.

We are looking forward to starting collaboration with a wikipedian in
residence at the Africa Centre, which is financing a call for a one-year reimbursed collaborator
focussed on Africanizing Wikipedia.

lettera27 is the 27th letter of the alphabet, the missing letter, the letter yet to be, the hybrid
sign, the empty box, the link between oral and written words, the connection to the future,
the intersection of analog and digital. http://www.lettera27.org/