This post is by Mark Brough, Research Officer at Publish What You Fund, Lucy Chambers, Community Coordinator for OpenSpending, and Irina Bolychevsky, Product Owner for CKAN. It is cross-posted on the OpenSpending Blog and the CKAN blog and Mark Brough’s contribution is also featured on aidinfolabs.org.

Saturday, December 3rd was Open Data Day, and London took the challenge to throw a hackday to help data be opened, cleaned and shown off to the world…

Fuelled only by enthusiasm, caffeine and 5 packets of ready-made popcorn, the CKAN, OpenSpending and IATI teams, along with some new faces, joined forces to liberate as much data as they could… 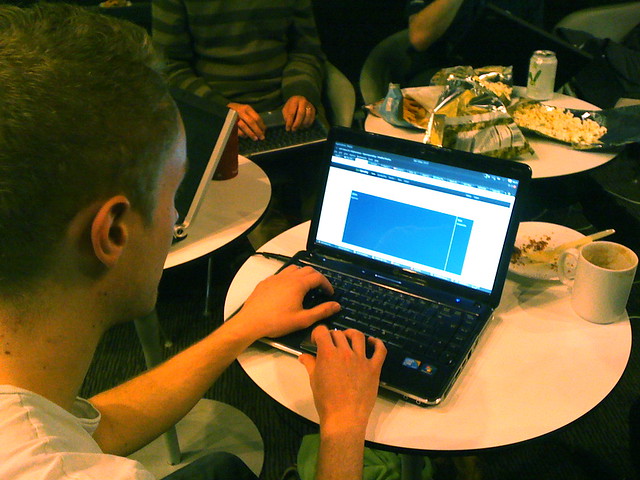 As part of the IATI Open Data Day challenges, Mark Brough did some work to get the existing IATI Data into OpenSpending. David Read, from the CKAN team, and a new face to the data wrangling crew, Johannes, scraped data on aid donations from France and Austria that were locked-up in web apps in order to help fill in the gaps in the global aid data jigsaw puzzle.

These, along with many other datasets discovered on the day via tweets and emails have been added to the Open Data Day Group on theDataHub.org.

You can see the results of the IATI wrangling process on OpenSpending.org/iati. This following section is written by Mark.

Downloading the existing IATI data has already become quite a big task; with 19 publishers so far, the data currently amounts to over 750MB with 1169 packages. Fortunately this is made easier by the IATI Registry, which provides an API to access all existing datasets, and a simple script (links at end) can retrieve all of the data.

Extracting the data from the XML files is more complicated. Although IATI data uses a standard schema, there are a few cases where publishers have either used the markup incorrectly, or else interpreted the definitions slightly differently. This can be simple problems such as stating that an organisation is “implementing” rather than “Implementing”, or placing the date within the text of the

However, these problems are still fairly limited and follow fairly regular patterns, so they are not too hard to overcome. There are more significant problems when some donors have for example used three-letter (ISO-3) country codes, rather than two-letter (ISO-2) country codes. (This is considered below in “next steps”.)

OpenSpending is designed to show spending data, and has a powerful aggregation system to show large collections of transactions in a meaningful way. However, IATI data is organised by activities, with transactions nested within activities (projects), and – reflecting the business models of funders – activities sit within other activities (e.g., projects within programs), although they are not nested in the actual XML. Furthermore, one of the significant advantages of IATI compared to other aid data formats is that it permits multiple sectoral classifications, allowing you to assign a proportion of the value of an activity to each sector. So, you might have an activity that is 50% related to health and 50% to education.

This takes about 40 minutes to compile, and then one final step remains: to convert the currencies to a single currency. Currently, USD, EUR and GBP amounts are used in the IATI data. All data is converted to USD using the average for 2010 from the OECD’s Financial Indicators (MEI) dataset. (This is also considered below in “next steps”.)

OpenSpending’s new web-based loading interface makes it relatively easy to load data in, although you currently also have to write a model and views (links at end).

The results can be viewed in the OpenSpending IATI dataset. You can explore the data by recipient country, sectors, funding organisation, and drill down through the data to see the data for an individual country.

Problems with the data

Please let me know if you see anything else problematic, if you have and criticisms of feedback of the way the data has been presented, or if you think there are other ways you’d like to be able to explore the data, based on the available dimensions.

As mentioned above, there are some problems with the data which should properly be dealt with at the level of the donor agency. But there are others that will probably have to be dealt with by users of the data:

What else have you noticed with the data? Is there anything else that should be changed? Anything interesting?