THATCamps (The Humanities And Technology Camps) are a form of “unconference” focussed on the nascent discipline of the Digital Humanities that have risen rapidly in popularity since their invention by the folks over at George Mason University.

I was lucky enough to be one of 50 participants at this year’s first THATCamp in Europe which was held in Luxebourg at the end of last week. On the first day of this conference-not-conference we gathered in the grand confines of the Centre Culturel de Rencontre. In true THATCamp spirit there were no lengthy introductory presentations just a nod to the people who would be leading the first set of sessions.

I was immediately met with disappointment when I realised that I wanted to go to five out of the six parallel sessions that were running. I went for the Zotero session. Frédéric Clavert took us through the basic ins and outs of the reference management tool as a stand-alone application and as Firefox plug-in.

Within minutes it became immediately apparent just how useful some of the compatability features of this tool would be for Open Knowledge Foundation projects like TEXTUS. It would be wonderful, I mused, if when I was reading a Nietzsche text online on OpenPhilosophy.org I would be able to just click a button to add it to my references in Zotero. What would be even more useful would be if I were able to highlight a given section of text and click – “cite in Zotero”. If Zotero could then save the URI that TEXTUS would generate for that quote plus all the relevant citation information this would make the process of citing texts in TEXTUS seamless for existing Zotero users.

After a quick coffee break, I was back in another session in which a group of academics, teachers, students, archivists and developers were given a crash course in Python.

We used Pythonanywhere and the Pattern module to manipulate and visualise networks of Twitter users who had been Tweeting who had been tagging their Tweets with that #thatcamplux.

While I doubt I’ll be making any significant contributions to the world of software programming in the near future it was an excellent opportunity to play with the power of Python and get to grips with some of its fundamentals.

Before we all headed off to the pub, one of the other key rituals of THATCamp was performed. We planned all sessions for the next day. Ideas were put forward, grouped and then voted on. Within half an hour a spontaneous schedule had emerged that covered a variety of topics that related to the Digital Humanities. The end result can be seen here.

On the second day I once again walked down to the Centre Culturel de Rencontre in the bright Luxembourgish sunshine to join my fellow campers for more unconference sheningans. I caught a workshop on training the next generation of digital humanists in which a rather self-reflective discussion was intiated about the nature of the digital humanities. Were the Digital Humanities pretty much identical to the disciplines we’d known since the Renaissance with a bit of Twitter and Word Press thrown-in, or were they something more, with new methodologies and avenues for knowledge creation? 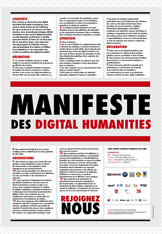 Marin Dacos, of Open Editions and founder of revues.org, endorsed the claim that what distinguished the Digital Humanities from the more traditional conception of the humanities was the potential it offered for open and collaborative research processes. This was consistent with the view enshrined in a a document produced by the participants at an earlier THATCamp, in which he had a hand, the Manifesto for the Digital Humanities.

THATCamp struck me as being an excellent antidote to the more rigid traditional style of conference we’ve all become accustomed to. It was breath of fresh air with a friendly and congenial atmosphere where people with a mix of skills were able to share their views and work together. It was also fantastic to see the extent to which ideas relating to open access were being put at the heart of the Digital Humanities’ agenda boding well for all the blossoming Open Humanities projects that the Open Knowledge Foundation now plays home to.