Last Friday (May 4), the Ministry of Planning in Brazil launched the final version of the Brazilian Open Data Portal. In line with the federal government policy to promote the use of free software in public administration, the portal was made using only free and open source tools. Among them is the Open Knowledge Foundation’s open-source data portal software CKAN. Moreover, the whole process of development of the portal was conducted with the participation of concerned citizens in an open way to promote open data. 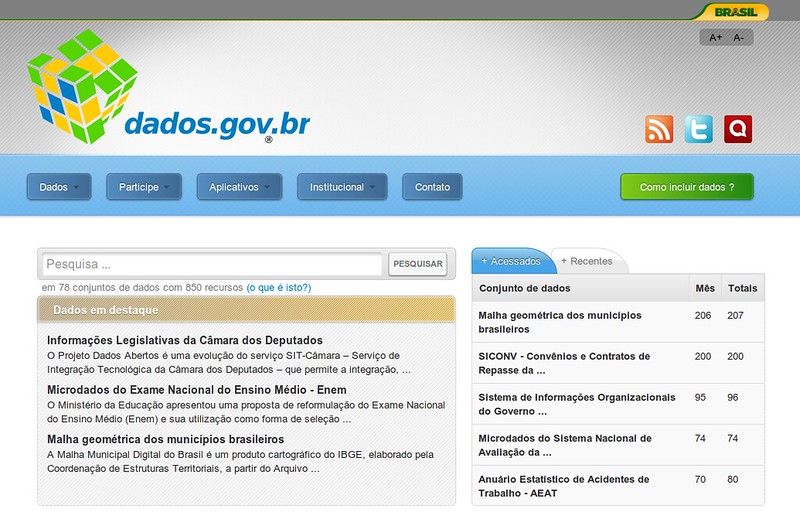 The development project of the Brazilian Open Data Portal takes the concept of social participation to the extreme. From the beginning, planning meetings and development forums were open to any interested citizen, announced in advance on open discussion lists and where possible relayed via live streaming video to the Internet (webcast) .

In each planning meeting, the development tasks were selected by a flexible development process, in which people present ideas of what they think is needed in small ticket records. At the end of the round, the tickets are grouped, categorized and prioritized. At the end of the meeting, the events were recorded in a publicly accessible wiki (INDA wiki), and a publicly visible task manager (Trac).

We engaged the participation of people from civil society and of civil servants, who collaborated in various ways. Some people were involved right through the process, while others made contributions along the way. We had contributions in the form of software development, design, and information architecture, among others. The latter began with an experimental “card sorting” conducted with the participants of the event Campus Party 2012 in Sao Paulo. This synergy between government and citizens working together for the common good is what we mean by open government.

The Portal has gone through several versions, but the most important are the first (a simple HTML page with a tagcloud of catalogue data), followed by its beta, a little more prepared and documented, and then the current version with a new set of features and extensive reference material and learning.

The dados.gov.br now has 78 data sets with 849 resources. These have mostly been catalogued based on a survey of data that public bodies already publish on the Internet, but that until then were scattered and lacked a central access point where the public could find them. They are, however, the tip of the iceberg compared to what there is to be opened around public data in Brazil.

Recognizing this and the urgency in meeting the new law on access to information, the Secretariat for Logistics and Information Technology is preparing a workshop to guide public bodies, on how to include their data in the catalogue. This will take place in early June.

The portal is part of a larger project called the National Infrastructure Open Data – INDA. The general idea of ​​INDA is to establish technical standards for open data, promote training and support public bodies in the task of publishing open data. This entire process is done through intra-government cooperation and cooperation between government and citizens, always aiming to achieve a real platform for open government.