Are the World Bank and Department for International Development (DfID) spending money on projects in similar sectors and countries? Does all aid to Kenya go the North-East? How much aid in total did India receive last year?

Until recently, it was impossible to know. But now, thanks to the International Aid Transparency Initiative (IATI), we’ve been able to start to answer these questions – making the aid process more transparent, which is crucial for making it more effective.

IATI is a political agreement by the world’s major donors – including international banks, private foundations and NGOs – on a common way to publish aid information. It also defines a technical standard for exactly how that information should be published, IATI-XML.

This post details how we converted each donor’s data, using simple scripts and open source tools, from raw XML data in the IATI Registry into a consolidated dataset and then, via loading into OpenSpending to visualisations like those shown above and an easy-to-use RESTful API. 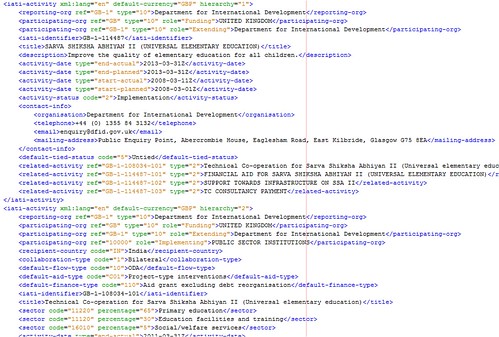 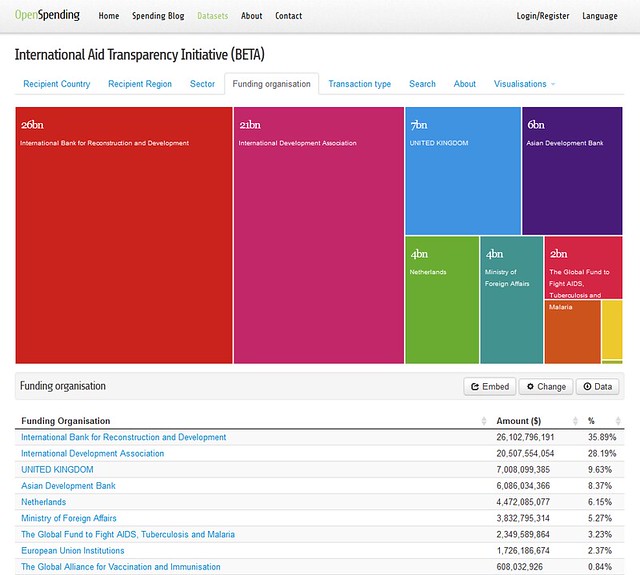 Getting the Data Together

Full details of how we got the data together are in this case study on OpenSpending … but to summarize:

What you can see

You can now explore the complete dataset of aid data released so far through IATI, exploring the aggregate and detailed data on OpenSpending. You can drill down through the data and look at it from different perspectives, from exploring the largest sectors in a country, to different implementing organisations in that sector, to looking at all the projects implemented by a single organisation.

Drill down from one layer…

… to the next – we’re zooming in on China here, breaking down by flow type…

… and here by funding organisation

Next steps & get involved.

For those keen to put coding knowledge to good use to further the IATI mission, some ideas below:

What’s in the data, what’s still to come

The dataset contains current and future spending by major aid donors representing 44% of ODF, with disbursement data running up to the current month in some cases. It also contains commitment data up to 2016 from one donor (and from multiple donors up to 2014).

However, the data does not contain any information from donors who have not yet published to IATI, and it also does not yet include results, project documents or geo-coded data.

Eventually what we’d like to see is something like this: an integrated dataset of aid and budgets in each country, so that the full picture of resource flows is available. 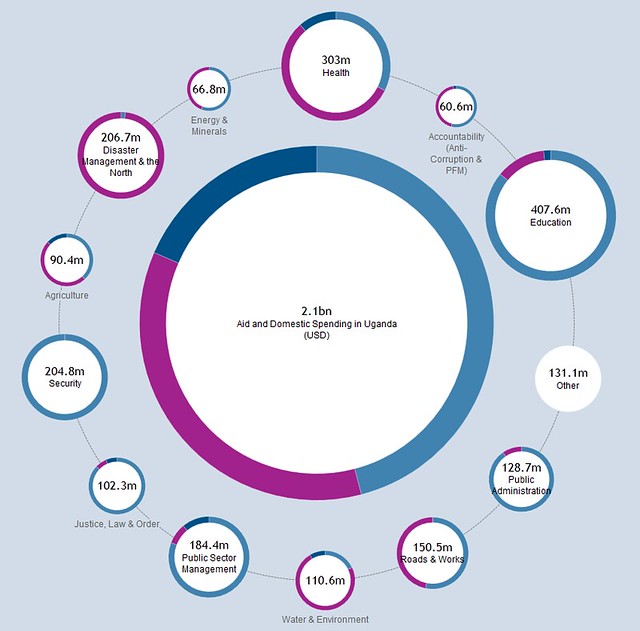 Which country will be next to join up their aid and budgetary flows? You can get in touch with us via the mailing list if you have any questions about this project or the data.

This post was written by Mark Brough. It is cross-posted on the OpenSpending blog.