This guest post is by Scott Hubli and Andrew G. Mandelbaum from the National Democratic Institute (NDI). NDI is partering with the Sunlight
Foundation and the Latin American Network for Legislative Transparency to enhance
networking among parliamentary monitoring organizations on issues of parliamentary openness
and democratic reform, with the support of the Omidyar Network, the Open Society Foundation
and the National Endowment for Democracy. 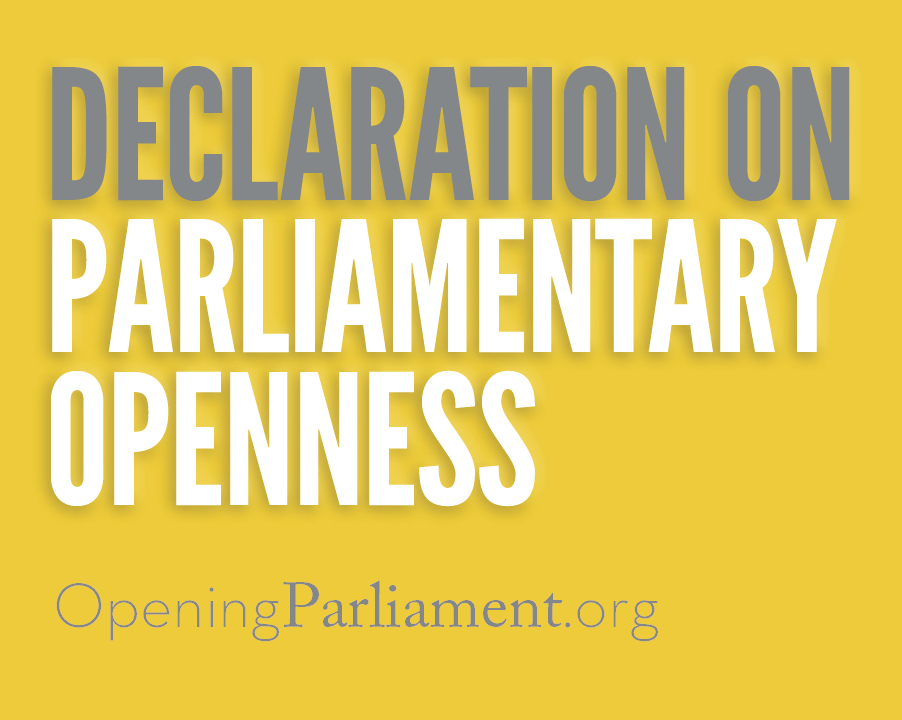 In joining the Open Government Partnership (OGP), governments have been going on record in
support of more open, participatory and accountable public institutions. To date, 55 governments
have agreed to develop national action plans, with civil society input and monitoring, that
commit them to this agenda. Although the quality of commitments made and intensity of civil
society engagement may vary by country, OGP has stimulated a valuable discussion about
the importance of citizen engagement in the political and governance processes—one that the
international community of parliamentary monitoring organizations (PMOs) is advancing in the
legislative realm through the Declaration on Parliamentary Openness.

As many commentators have noted, OGP has largely ignored parliaments and the issue of open legislative data, despite an increasing recognition that open data policies should be designed to support improved democracy, not just improved service delivery. Because the action plans are initiated
by the executive branch, parliamentary buy-in may be something of an afterthought. Yet, as
the institution responsible for approving laws, representing citizens and overseeing executive
performance and policy implementation, parliaments are essential sources of public information.
They are also critical venues for giving voice to citizens’ interests and ensuring that their
needs are reflected in laws and their implementation. It’s no wonder that M. Steven Fish calls
parliaments “a—or even the—institutional key to democracy.”

Recognizing the potential for improved collaboration with parliaments to deepen their
commitments to openness and to citizen engagement in parliamentary work, more than 70
PMOs from over 50 countries — and counting — have expressed support for the Declaration
on Parliamentary Openness. They have also established a network at OpeningParliament.org.
In recent years, PMOs have commenced monitoring of legislative institutions around the
world to improve citizen understaning of parliaments, and to advocate and support parliamentary
efforts to become more representative, accessible, accountable and responsive. While some
PMOs gather members of parliament (MPs) and citizens for face-to-face discussions on
policy issues, others develop technologies to help citizens understand and use parliamentary
information or contact their MPs. In all instances, PMOs’ abilities to promote parliamentary
openness and engagement depend on access to parliamentary information.

Forthcoming commentary, which will accompany the Declaration’s launch, highlights a number
of instances of parliaments making concerted efforts to become more open. Italy’s Chamber
of Deputies, which is co-hosting this year’s World e-Parliament Conference, is a leader in
linked open data for parliaments, while Brazil’s lower house has had success generating citizen
participation in the legislative process through it’s e-Democracia website. The U.S. and U.K. are
among small group of parliaments making select information available in open and structured
formats. Most excitingly, several parliaments in Africa and Latin America are playing with a
promising open source software based on the Akoma Ntoso schema for legal documents that is
currently undergoing the OASIS standardization process. The forthcoming World e-Parliament
Report 2012 and the Global Parliamentary Report describe a number of online and offline
measures parliaments have taken to improve openness and participation.

However, many parliaments have yet to benefit from these advances. In
many countries, parliaments could do more to take advantage of opportunities presented by
modern technology to engage citizens or provide information in open and structured formats
that facilitate analysis and reuse. A number of parliaments still fail to provide access to basic
information that would allow citizens to meaningfully participate in the legislative process,
such as the text of draft legislation, hearing schedules and parliamentary votes. The increasing
interconnectedness of the world’s citizens through social media, the Internet and mobile
technology is rapidly changing citizens’ expectations for good governance and what parliaments
must deliver. Parliaments that improve openness and participation can reinforce public
confidence at a time when citizens around the world are becoming increasingly demanding of
their representative institutions.

The Declaration will be formally launched at the upcoming World e-Parliament Conference,
on the International Day of Democracy, and will be published in multiple languages. Members
of the PMO community will also welcome dialogue and collaboration during the Transparency
and Accountability track at OK Festival on Tuesday 18th September, and at a meeting to discuss
future collaboration among PMOs on Wednesday the 19th. Interested individuals can also signal
their support for the declaration here.

The National Democratic Institute is a nonprofit, nonpartisan organization working to support and strengthen democratic institutions worldwide through citizen participation, openness and accountability in government. http://www.ndi.org/