Sometimes, the band continues to play because the audience is enjoying the music so much. This is pretty much what happened to Lobbyplag. Our plan was to drive home a single point that outraged us: Some Members of the European Parliament were taking law proposals verbatim from lobbyists and trying to slip them into the upcoming EU privacy law. They actually copy-and-pasted texts provided by the likes of Amazon, Google, Facebook or some banking industry body. The fact itself was Max Schrems’ discovery. Max is a lawyer, and he sought the help of Richard Gutjahr and the data journalists and developers from OpenDataCity – to present his evidence to the public in form of a website called Lobbyplag. The name evokes memories of past projects where people had hunted down plagiarism in the doctoral theses of German politicians.

Lobbyplag – discover the copy&paste politicians from Martin Virtel on Vimeo.

A lovestorm of reactions ensued, not only from the usual consumer privacy advocates. The site struck a chord among lobbying-stressed lawmakers and outraged citizens alike. Wolfgang Thierse, the president of the German Parliament, called it “a meritorious endeavor”, and two European lawmakers pledged to disclose their sources. People started proposing other laws to look at, started sending us papers from lobbyists, and offered their help for finding more lobby-plagiarizing politicians.

What had happened? Looking into the details of Privacy Law is not normally a crowd-pleaser, and like most laws this one was being made out sight, watched over only by a few specialists. This is the norm especially for the EU parliament, which still doesn’t attract a level of public attention and scrutiny to match its real power. There had already been a lot of reports about the intense lobbying against the Privacy Law.

Lobbyplag made a difference because Lobbyplag set a different tone. We simply presented the proof of what was being done behind closed doors – and gave people the power to look it up for themselves. And they did. And they liked it. And asked for more. 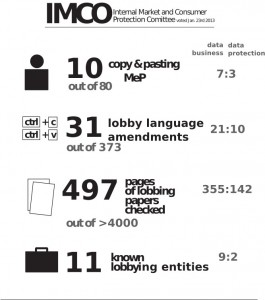 At that point, we decided that this was to be more than a single issue website, this was a public utility in the making. We successfully completed a 8000€ crowdfunding campaign at Krautreporter.de, a fledgling German platform, and we are now building the tools that interested citizens (assisted by algorithms) will need to make the comparisons between lobbyist texts and law amendments, and draw the conclusions by themselves. Stefan’s Parltrack project, which provides APIs to the European Parliament’s paperwork, will provide the foundation, as it did for the first iteration of lobbyplag, and we’re looking at using the Open Knowledge Foundation’s pybossa, a microtasking framework (you can see it in action at crowdrafting.org).

Of course, the first round of money is only a start – we’re a team of volunteers – so we also submitted Lobbyplag to the Knight News Challenge, which this year fittingly is looking to support projects that improve the way citizens and governments interact – you can read more about the proposal and provide feedback on the Knight News page.

We think that making comparisons easy and bringing lobbying out into the light is a way to achieve that. There’s nothing inherently wrong with lawmakers relying on experts when they’re not experts themselves – you’d expect them to. But if they hide who they’ve been listening to, and if they only listen to one side, they contribute towards public distrust in their profession. Making the process of lawmaking and influencing lawmakers more transparent will result in better debate, better understanding and better laws.

There’s a saying that “Laws, like sausages, cease to inspire respect in proportion as we know how they are made” – but we think that is not true any longer. Citizens all over the world are not really willing to respect lawmakers unless they can trace what they are stuffing in there.

Martin Virtel has blended enthusiasm for programming with training as a journalist, in his quest to produce images and tell stories in a more meaningful and accessible way. Before lobyplag.eu, he was developing a new digital life for the now-defunct Financial Times Deutschland.