Yesterday a group of campaign organisations revealed that Alliance Boots – the British pharmaceutical giant which operates the high street chemists ‘Boots’, and one of the UK’s biggest private companies – avoided over £1.1 billion in tax payments over the past 6 years.

Tax avoidance schemes are estimated to cost the UK up to £120 billion every year – a considerable amount when you consider that the total 2012 budget for the UK was £682 billion.

As the report says:

If Alliance Boots had not deducted its finance costs, the Treasury would be richer by an estimated £1.12 billion to £1.28 billion. Even taking the lower end of that range, those tax payments could have funded more than two and a half years of total prescription fees for all of England. It is also equivalent to the starting salary of more than 78,000 NHS nurses for a year – roughly 120 additional nurses per parliamentary constituency, and more than the total number of nurses estimated to be cut from the NHS between 2010 and 2015 […]

In their concluding recommendations, the report’s authors highlight the importance of greater transparency around company ownership and public contracting, which could both help to discourage the kind of aggressive tax avoidance practised by Alliance Boots.

The Government should introduce a rigorous public system of documentation and disclosure of beneficial ownership in the UK and require regulatory reform of the Overseas Territories – such as Gibraltar and the Cayman Islands. […] Ensuring that a rigorous public register is introduced is vital in order to be able to assess the true beneficiaries of the kinds of related party financial transactions used by Alliance Boots.

We heartily concur with this conclusion. As we’ve said before, we think that registries of who really owns companies around the world should be published as open data.

The UK government has a major opportunity to take leadership in this area by making its own registry of beneficial ownership publicly available, and by encouraging other countries to do the same through various international fora, such as the G8, the G20, the OECD and the Open Government Partnership.

We’ll be covering developments in this area (or absence thereof!) at the Open Government Partnership Summit in London in a couple of weeks, so watch this space. 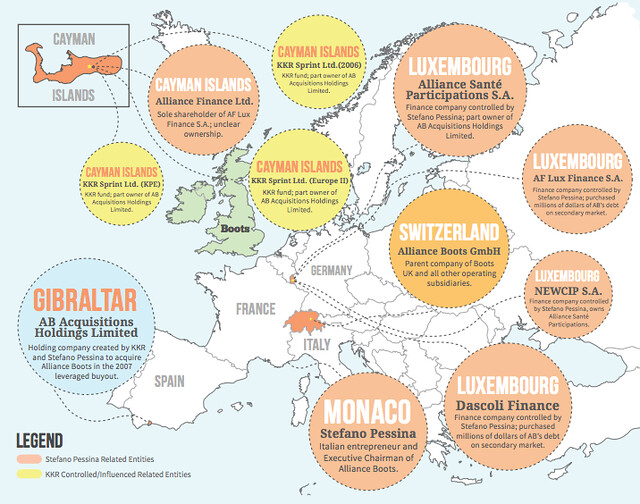 Detail from the “Alliance Boots and the Tax Gap” report released yesterday.