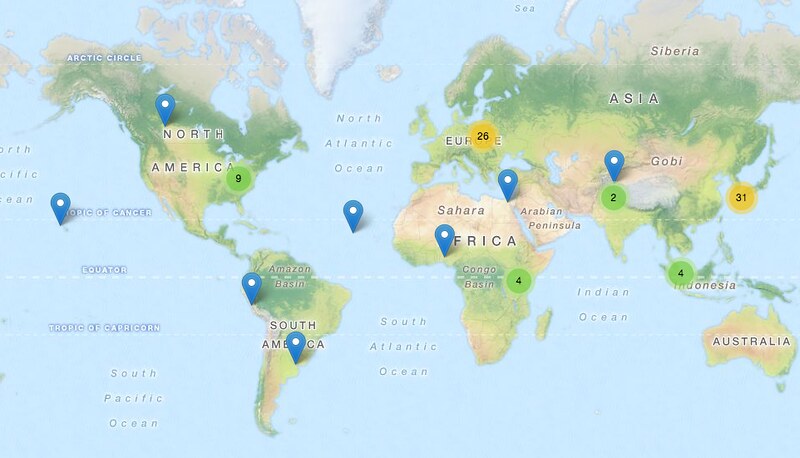 What: It’s a gathering of citizens in cities all around the world to write applications, liberate data, create visualizations and publish analyses using open public data.
Why: To show support for and encourage the adoption open data policies by the world’s local, regional and national governments.
Where: All around the world, in person and online, in a timezone near you!

We are hosting another G+ hangout for the whole Open Data Day community.

It will recorded for those unable to attend. See the last ODD video.

Some inspiring community Initiatives (among so many!)

A handpicked selection of inspiring community initiatives happening on Open Data Day 2014. Is yours missing? Tell us everything about it!

In Spain there will be six events on Open Data Day. In Madrid Open Knowledge Foundation Spain will be organizing the first OKFN Award for Open Knowledge, Open Data and Transparency to recognize extraordinary efforts in the public and private sector on those subjects. Submission process is now open – see more info at http://premio.okfn.es.
Additionally, there are events in Seville, Barcelona, Granada, Zaragoza and Vigo.

There are a number of Open Data Day events in Canada. The first ever Canada Open Data Summit will occur right before Open Data Day. Communities across the country are self-organizing events from Vancouver to Edmonton to Windsor to Sherbrooke. Heather Leson, OKF staffer, will participate in Toronto’s ODD in a roundtable discussion and OKF Ambassador, Diane Mercier, will be participating in Montreal’s Open Data Day hosted by Quebec Ouvert.

In Argentina the Open Data Day event, organized by Buenos Aires Open Government Office, Ministry of Modernization, will focus on going out into the street to play with local data from the Buenos Aires data portal, and show neighbors some of the things that can be done with local data. For instance select street artists will join the team to process data and work on visualizations that will then afterwards be painted as street murals around Buenos Aires.
The idea is to do something of greater impact to include not only the data community, but also a bigger audience by mixing street art and data. Read more here.

In Germany Open Data Day will be celebrated in 5 cities. In Berlin, it will be hosted by Wikimedia and put a focus on health and social structure data that the city releases specifically for the event. They will also use this as a launch event for Code for Germany, their new network of local hack groups called OK Labs. Read more on the German Open Data Day website.

Kenya passed a new constitution in 2010 that created devolved administrative units (counties) which have been operational since March last year. For Open Data Day in Kenya, organized among other by Open Institute, Angani and pawa254 they are aiming to engage communities in the three major cities, Nairobi, Kisumu and Mombasa to take advantage of the new system to organize themselves to build a demand driven open data ecosystem in their communities. Activities around this involve talking to the local governments and institutions to open up their data and/or scraping the data from their website. Find out more at the Open Data Day Kenya website.

In Japan a whopping 31 cities are participating in Open Data Day, which is being prepared in an impressive fashion. Last week the organizers — which include Code For Japan and Open Knowledge Foundation Japan — held an Open Data Day press conference to inform of the activities that were being planned; an event that was even covered in national media. Additionally, the group organized a pre-event a few days ago in which some of their fellow local organizers presented plans for Open Data Day activities in different areas (see some of the presentation slides: Open Street Map, ODD Chiba. You can keep track of everything on the Open Data Day Japan website.

After so much inspiration – time to roll up our sleeves!

Let’s get making and building with open data!

2 thoughts on “What are you doing on Open Data Day?”