Code for South Africa just launched https://municipalmoney.gov.za/, a New Municipal Money project for South Africa, in partnership with the National Treasury. This is a step forward in collaboration with government. Code for South Africa’s goal is to empower citizens to hold their municipal officials to account. The focus of the portal is on municipal financial performance. It is partly built on the babbage engine being used by OpenSpending.

Most citizens have a reasonable idea of the basic services municipalities should provide and don’t look too closely at their municipality, its budget and spending until something goes wrong. Even then, finding the necessary information could take many hours of analysing complicated reports, financial statements, and other documents, and would only be possible for someone who has a certain level of financial literacy.

But now Municipal Money, a new web-based tool built for National Treasury by Code for South Africa makes this information for all South African municipalities accessible in an easy-to-understand format with a few clicks of a mouse. The site also links to all the original Treasury source documents allowing anyone with the requisite skills to dig deeper.

It is searchable by municipality or street address, and it also allows side-by-side comparisons between two municipalities. 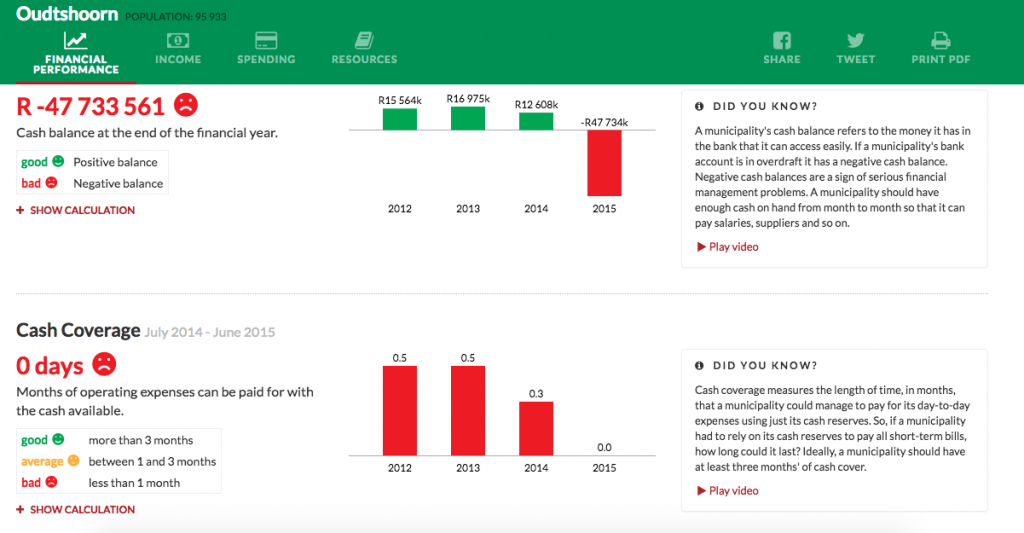 For example, at the end of 2015, the town Oudtshoorn in the Western Cape had a negative cash balance of over R60-million and it was not even able to cover a single day of its day-to-day expenses.

In the last four years, the municipality has spent nothing at all on repairs and maintenance, which has heavily affected service delivery in the area. And the total it spent on operating expenses is unknown, as the municipality failed to report to Treasury for the 2014/2015 financial year.

This is clearly a municipality in dire straits.

Normally, this information would not be easily available to the public. Now, Municipal Money gives citizens the information and ability to hold municipalities to account if they are not performing.  according to a Treasury statement.

“The creation of this portal is in response to the commitment made by the Minister in his 2016 Budget speech to launch a data portal that will provide stakeholders with municipal financial information, in order to stimulate citizen involvement in local governance. It is also in line with international best practice, in terms of which governments are increasingly opening up their data to the public and specifically budget data – to promote oversight, transparency and accountability.”

Says Greg Kemp, head of technology at Code for South Africa, which built the tool: “National Treasury does a good job of making information available, but there’s a difference between that and understanding the information. The goal is to use technology to bridge that gap. People can see financial performance indicators in a way that is easy to understand, whether they’re good at reading financial information or not.”

Monitoring the performance of municipalities should be an ongoing conversation and not just limited to election time, says Kemp.

“Residents often engage with their municipalities at the edges: when paying their rates and when things aren’t working. In reality, municipalities provide an enormous number of services and need to be run effectively. It’s our job as residents to understand what their obligations are and to see if they provide the services up to the level that we’re happy with.”

But analysing information that makes holding municipalities accountable is often left to those with a little more financial nous. Municipal Money removes the middle-man, and encourages all citizens to get involved even providing contact numbers for municipal officials. 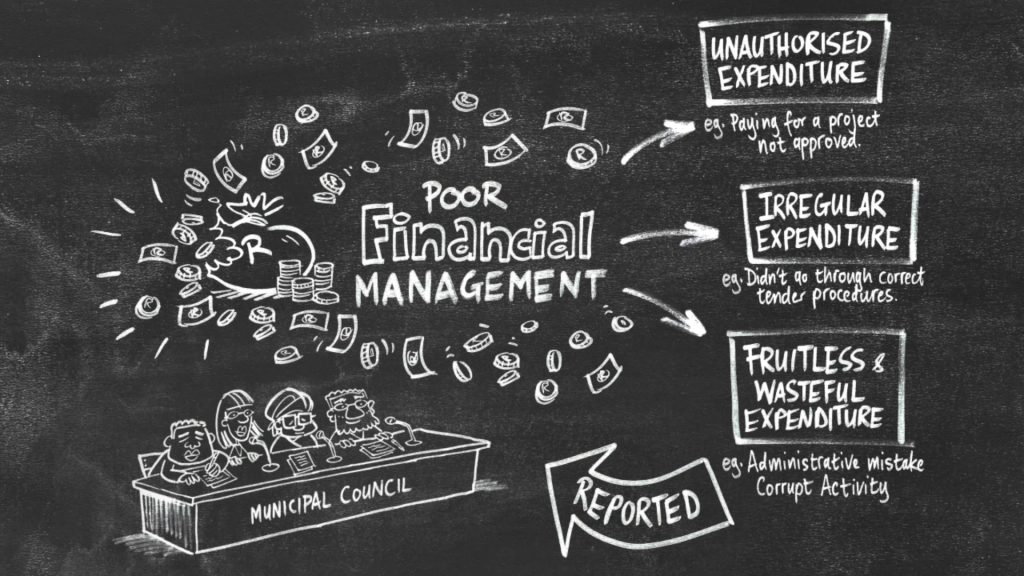 Adi Eyal, director of Code for South Africa, says that while local budget information has always been accessible, it’s difficult for most people to understand what it means: do the numbers mean the municipality is doing well or not?

Municipal Money is neutral on the state of municipalities, but aims to show whether spending is “good” or “bad” based on defined indicators that have been identified by government. The collaboration between National Treasury and Code for South Africa fits within the context of an Open Government Partnership – an international movement that aims to connect civil society with governments to make them more transparent, says Eyal.

“This is an opportunity to help citizens become more aware, more engaged and more involved in holding local government accountable.”

The website “puts a friendly face to complex data”, presenting it in a way that users can assess what the numbers mean.

The data provided by the National Treasury is made available for applications via an online analytical processing (OLAP) interface using the Babbage framework from OpenSpending.

Two websites were then built to provide easy access to the data: one aimed at end users with simple municipal profiles and performance indicators; and for those interested in performing deeper analysis, a financial-statement-style view for finding and extracting hard numbers and downloading subsets in CSV and XLS form. The latter also contains documentation for accessing the information structure form to build applications.

The full power of the advanced interface proved to be a bit overwhelming at first. Workshops held early in the project with civil society organisations showed that people using the more advanced interface struggled to navigate the data due to its scale and flexibility. This motivated us to present the data in a more structured form. We decided to use the same structure that municipalities use to submit their financial data to treasury. As users familiarise themselves with the data within the structure, they can find what they are looking for more easily.

But ultimately, it is about empowering ordinary people with the skills “to better understand the budgeting process for local government, and to participate in the creation of budgets”, says Eyal.

Sarah Evans is news editor at the Code for South Africa Data Journalism Academy. After starting her career in music, she joined the Diamond Fields Advertiser in Kimberley as a news and entertainment writer. She later became a reporter for the Mail & Guardian, specialising in labour, law and investigative journalism, and is also an amaBhungane Centre for Investigative Journalism Fellow.