Scholarly communication has undergone a seismic shift away from closed publishing towards an ever-growing support for open access. With closed publishing models, academic libraries faced a so-called  “serials crisis” and were not able to afford the materials they needed for their researchers and students. Partly in response to this problem, open access advocates have argued for increased access, whilst also changing the cost structure of scholarly publishing. In many countries this has led to experiments with ‘author pays’ models, where the prices of large commercial publishers have remained high, but the costs have shifted from readers to researchers.

Public data about the costs of these changing publishing models remains scarce. There is an increasing concern that they may perpetuate oligopolistic and dysfunctional structures that do not serve the interests of researchers or their students, readers and audiences. Some studies suggest that prices of open access publishing might unfairly discriminate against some institutions and point out the sometimes stark pricing differences across institutions. Funding organisations and institutions worry that hybrid journals might levy ‘Article Processing Charges’ (a common way of funding open access publishing) while not providing a proportionate decrease in subscription costs – thereby charging researchers twice (so-called “double dipping”).

Yet, evidence is fragmented and displays incomplete information. Members of Open Knowledge International’s network have been following this issue for several years.  Jenny Molloy wrote a blogpost on this issue for Open Access week three years ago. We have supported research in this area undertaken by Stuart Lawson, Jonathan Gray and Michele Mauri, and we published an associated white paper as part of the PASTEUR4OA project. To date public data about scholarly publishing finances remains fragmentary, partial and scattered.

The lack of publicly accessible financial information is problematic for at least three reasons: 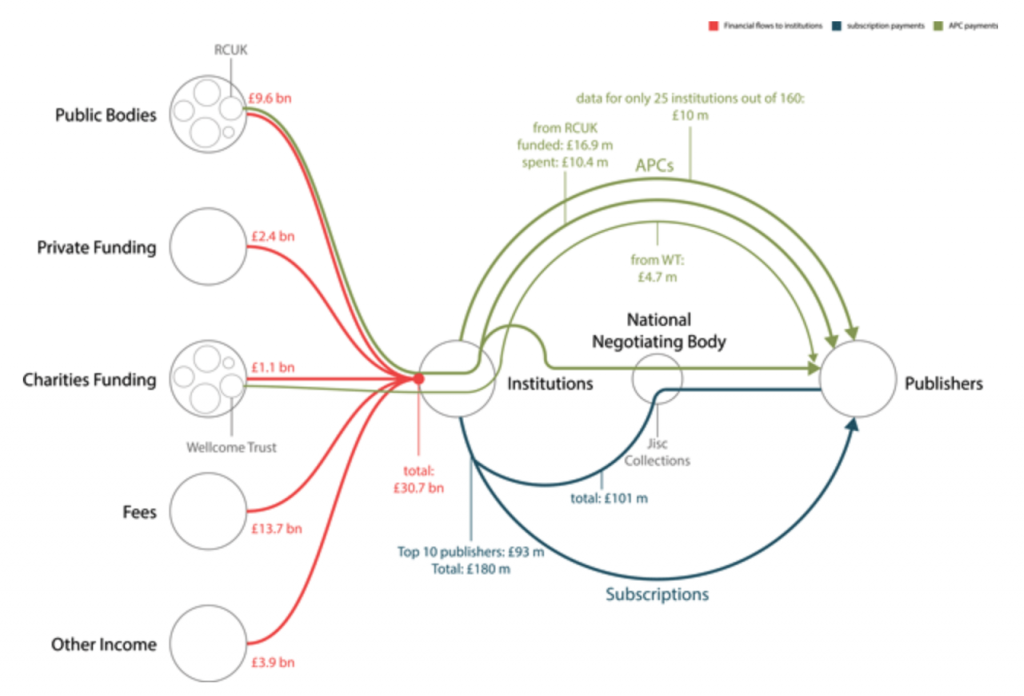 Rising momentum for a public data infrastructure of scholarly finances

There is rising momentum within the larger research community – including funders, institutions and institutional libraries – to address the current lack of financial data around publishing. Earlier this year, Knowledge Exchange published a report underlining the importance to understand the total cost of publishing and the role of standard documentation formats and information systems to capture those. Funding bodies in different countries insert reporting clauses in their funding policies to gain a better picture how funds are spent. The UK’s higher education infrastructure body Jisc has worked with Research Councils UK to create a template for UK higher education institutions to report open access expenditures in a standardised way and release it openly. This effort should support negotiations with journal publishers around the total costs of publishing.

In different European countries, funders and institutional associations start to create databases collecting the amount of money paid through APCs to single journals. The Wellcome Trust UK published information on how much it spent on open access publishing each year from 2010 to 2014. In a similar vein the German Open APC initiative, part of the initiative Transparent Infrastructure for Article Charges, crowdsources data on GitHub to publicly disclose money spent by different European institutions on open access publishing. And Open Knowledge International hosts a wiki for payment documents requested via FOI.

What can be done to start contributing to a public database?

To lay the ground for collaboration Open Knowledge International wants to spark a dialogue across open access advocates, funders, universities, libraries, individual researchers, and publishers. In what follows we outline next steps that can be taken together towards a public data infrastructure:

Funding organisations, institutions and individual researchers should increase (inter)national research activities on the topic 1) to understand the magnitude of different cost types, 2) to identify new cost factors, necessary data representing them, and factors rendering them opaque, 3) and to analyse the benefits of alternative payment models for specific disciplines and institutions. Research should reflect rising administration costs and offer recommendations how to mitigate them.

Institutions, funding organisations and individual researchers can deliver evidence by disclosing their payments in databases accessible by everyone. If other institutions follow their model this allows for public comparisons of actual payments, to detect unreasonable pricing discrimination and to publishers not complying with open access funding policies.

How to support a move towards more transparent scholarly publishing

I’d like to thank Stuart Lawson and Jonathan Gray for their thoughtful comments and advice while writing this blogpost. This post draws from their paper “Opening the Black Box of Scholarly Communication Funding: A Public Data Infrastructure for Financial Flows in Academic Publishing.” Open Library of Humanities, 2(1). https://doi.org/10.16995/olh.72 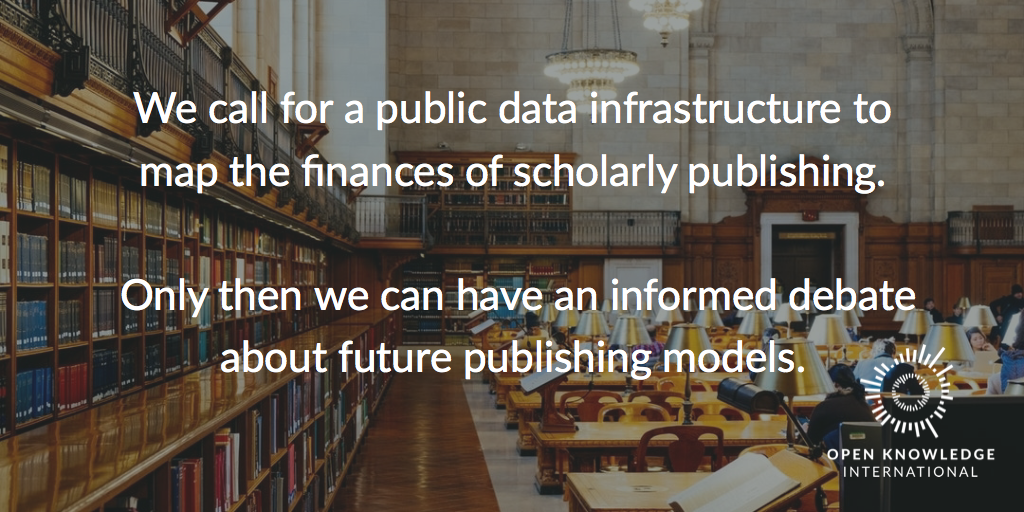