In Bogota (Colombia), we developed a hackathon, called #AlimenData, focused on following and visualizing public money associated with School Feeding National Program of Colombia through a co-creation process where different actors were involved.

#AlimenData was performed in conjunction with public sector and civil society. In this hackathon participated the National Secretary for Transparency, Ministry of Finance and Public Credit, Ministry of Communications and Information Technology, Open Contracting Partnership, and Open Knowledge Colombia.

Thirty-six teams were registered, from which ten multi-disciplinary and high-motivated groups (composed of twenty-seven participants in total) were selected across the country in order to develop their ideas. These teams were composed of different actors (citizens, academia, social actors, local governments, etc.). 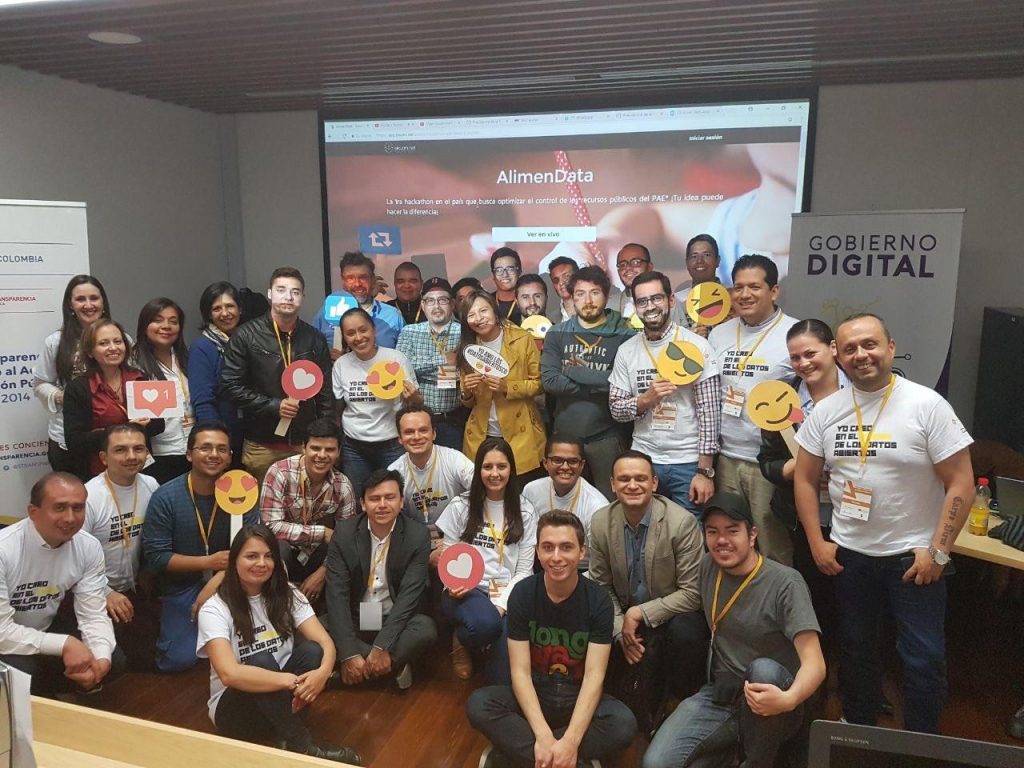 The major obstacle to the Open Data campaign in Ghana has to do with government’s reluctance to pass the Right to Information Bill after 17 years of active campaign. Among the major challenges identified by iWatch Africa has to do with access to relevant accounts and financial reports. In some cases, accurate expenditure/transfer records do not exist at all. Here CSOs continue to play an important role putting pressure on the government in collaboration with the media, local level service providers and/or users and the public.

In order to encourage these challenges, we suggested different open data related to School Feeding National Program, from which some datasets were proposed as mandatory ones (datasets related to public funding), and other optional ones were suggested (e.g.: datasets associated with population, education, food prices, etc.). Next, we list several of the suggested open data:

Gideon Sarpong, iWatch Africa’s Director of Policy and Content Analysis who delivered a speech on the main theme emphasized the importance of open data in addressing the challenge of corruption in Africa. “Open data in governance is critical to addressing corruption in Ghana as well as developing effective policy reforms and an efficient public sector. It is in the interest of public institutions to join in the open data initiative and actively take steps to open up,” Mr. Sarpong stated.

Resource person, Justice Kumordzi addressed the theme; Effective use of Data Journalism tools to effectively track government expenditure/budget in Ghana. Mr, Kumordzi focused on the vital role of data journalism in detecting bottlenecks, inefficiencies and/or corruption in the transfer of public goods and resources. He also noted that open data is a key tool for the government and civil society organizations (CSO) to guard against corruption and work towards ensuring a transparent, accountable and effective public financial management. 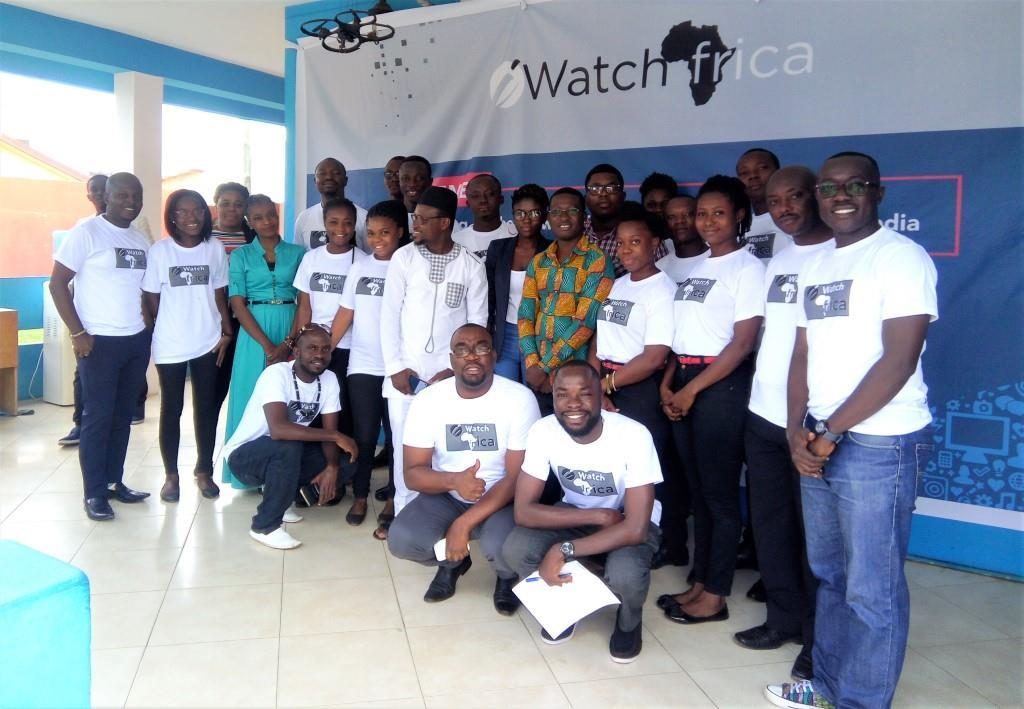 After a practical session of his presentation, participants held an open forum on the theme; How can data journalists harness the power of the new media to promote transparency and accountability in Africa.

Open Knowledge Colombia in conjunction with National Secretary for Transparency, Ministry of Finance and Public Credit, Ministry of Communications and Information Technologies, and Open Contracting Partnership prepared a complete agenda for the #AlimenData hackathon.

In this scenario, we had the participation of different mentors, which talked about the School Feeding National Program, open data, data cleansing, software developing, visualization, and storytelling. These talks, which were complementary with hacking sessions, helped knowing more deeply our context (School Feeding National Program), the selected datasets, and various techniques and tools. Furthermore, our collaborators accompanied and advised to each group when during all the hackathon. 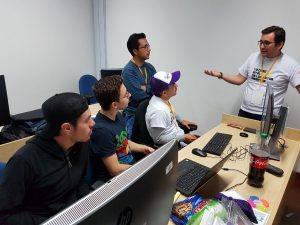 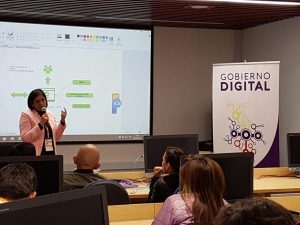 Besides these talks, the participants of the hackathon had a chance to participate in a rehearsal session, where each group presented their preliminary proposals during 3 minutes. In this session different teams received feedback from mentors and organizers. Furthermore, different teams also received feedback from members of other teams, performing a collective co-creation process. This process allowed mutual enriching, since teams exchanged useful and multi-disciplinary viewpoints.

The point of convergence between the two organisation’s methodology had to do with data visualisation as an important tool to tell effective stories. While #AlimenData hackathon focused on software developing, visualization, iWatch Africa also focused on practical sessions on three key forms of data visualisation, which include; text, graphic and tabular forms of presentations.

Participants during the open forum resolved to focus on four key themes in 2018 as part of their effort to drive the open data conversation to make meaningful impact in policy making decisions in Ghana. These include; 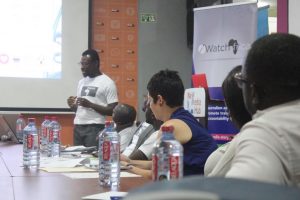 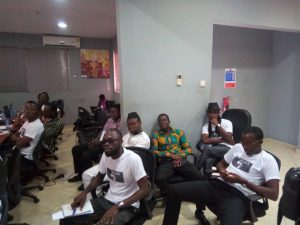 On the other hand, different teams addressed the two main challenges that we proposed in the #AlimenData hackathon. Thus, teams presented various proposals at the end of the Open Data Day. Next we highlight some ones:

The organizers of this hackathon chose one project as winner. The selected one proposed an email service for communicating to parents the menu of each week using open data and blockchain technology. This proposal allows that parents can monitor and report the existing differences between the contracted menu in the context of School Feeding National Program of Colombia and the menu received for their children (students).

The work on the projects that has been started during Open Data Day will continue, since we are working with different Governmental bodies in Colombia in order to develop some of these prototypes and to improve School Feeding National Program of Colombia.