For the last edition of Open Data Day, two very different cities Madrid (Spain) and Puebla (México) have joined efforts to demonstrate that open data is an essential tool for social development. We could see this in the sessions that took place that day, where students, journalists, political scientists, technologists and public servants gathered to prove that open data is useful to center the future of research and science, as well as building bridges between citizens and decision makers.

During Open Data Day in Puebla, Epicentro Inefable AC and the State Coordinator for Transparency and Open Government (CETGA for its Spanish initials), along with the Engineering faculty of the  Benemérita Universidad Autónoma de Puebla organized the Open Data Day Puebla Bootcamp, with the goal of disseminating the benefits of data in open formats.

During the welcome, we called teachers, students and people in general, to use the data that the government of Puebla publishes openly. We also mentioned that open data can be a bridge between government and people, and it works to generate better public policies and strengthen civic participation for decision making for social good. 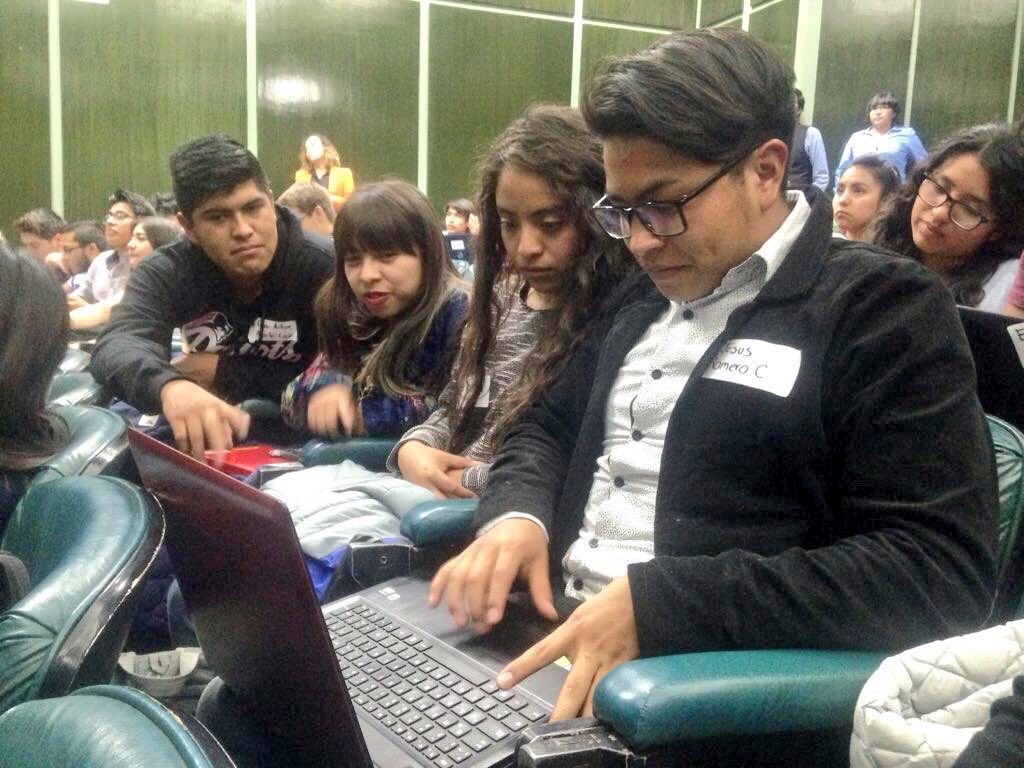 We had presentations for students of different public universities in Puebla by Karla Ramos, the director of Epicentro Inefable A.C.; Boris Cuapio and Hugo Osorio, founders and partners of Gobierno Fácil; Tony Rojas, director of Open Government of the CETGA; Juan Carlos Espinosa, youth ambassador of My World Mexico, and Luis Oidor, chief of the Open Government department in the CETGA.

In the panel “Morning Data, what is open data and what do they work for?”, the presenters highlighted the qualities that open data should have, like being free and of easy access. They also emphasized their usefulness as a digital tool that every person can use as a source of information, to improve the quality of life in their community.

During his participation, Hugo Osorio highlighted that open data can be used as a tool for entrepreneurship. For example, he mentioned that apps like Waze and Uber use open data y for 2013 the generated more than 920 million USD in the US.

To close the session, Luis oidor presented the actions that the government of Puebla is implementing to train, train public officers for publication of new data sets. He mentioned that up to now, 91% of the agencies and 81% of the municipalities have received training in this subject. As a result, they have published 416 data sets in topics like health, education, transportation, finance, employment, business, security and service delivery, which can be accessed through http://www.datos.puebla.gob.mx./.

As a final activity, we navigated through the datasets available in the government portal, where 100 students and teachers participated in 20 different teams. Hugo, Boris and Karla were in charge of grading the results of the 12 questions we asked during the event and named the winners. 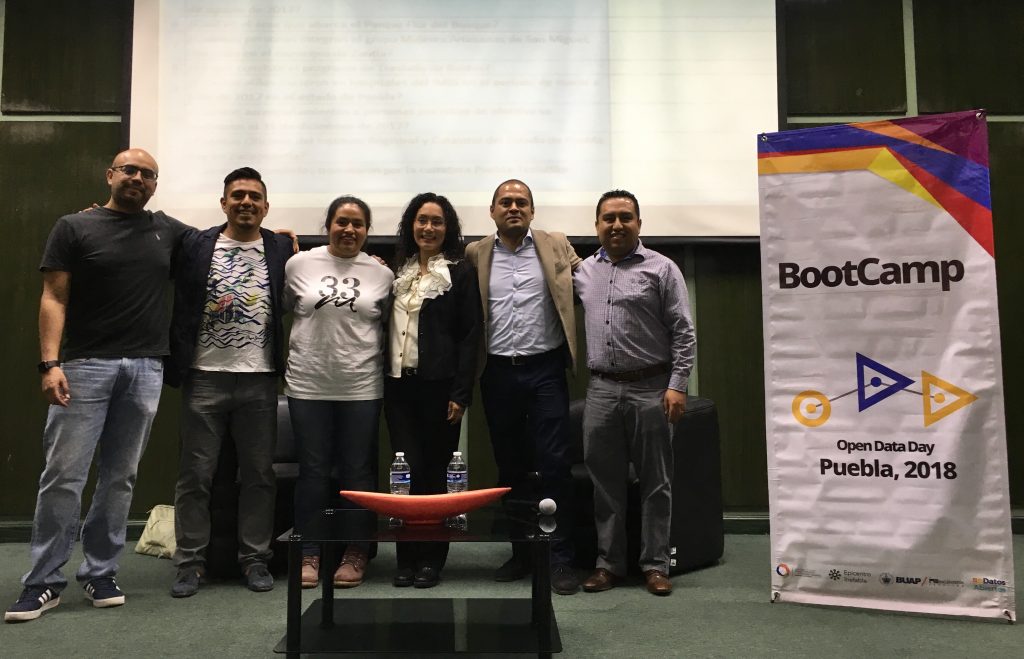 Open Data Day in Madrid was focused on Open Science. For two days -March 2 and 3- we gathered a distinguished group of professionals and students of many disciplines in Medialab Prado. The participants participated in the sessions organized by the Ontology Engineering Group (OEG), ODI Madrid and Datalab.

Among the speakers we had David Abián, from Wikimedia Spain, María Poveda, from the Ontology Engineering Group (OEG) and ODI Madrid; Mariano Rico, a member of the OEG, responsible of explaining the use and utility of the DBPedia; Olga Giraldo, who presente “SMART protocols for Open Science”, and Fernando Blat, from Populate. Bastien Guerry, from the Office of the Prime Minister of France, in charge of maintaining the org-mode software org-mode closed the day.

During the morning, David Abián taught us how to extract data from Wikimedia in order to do any research that might interest us. He explained the formats in which we can obtain and generate information in this wiki and taught us through a simple practical exercise: extract data about a specific topic: nuclear plants. As we went through, he explained what this information could be useful for. He made clear how open data can be used from scientific research, open science to writing journalistic papers or information for policy decisions. Maria Poveda explained what ontologies are for. She did this through a light chat that allowed us to understand how to develop them and how we can use them in the open data context.

After the lunch break, Olga Giraldo presented the keynote, a chat about open science entitled “SMART protocols for Open Science”. She allowed us to know how, since when and why we gather and publish scientific data. “Data by itself doesn’t explain its use” Giraldo said. The researcher insisted that data should go “along with a document -lab protocol- where we can explain how we get to the data and how we can use them”. The importance of protocols and their content lies in its design and accessibility, two keys to find scientific data and the information you might need. Her work on the SMART protocols platform, where researchers can publish their protocols, besides gathering other information is a sample of this. 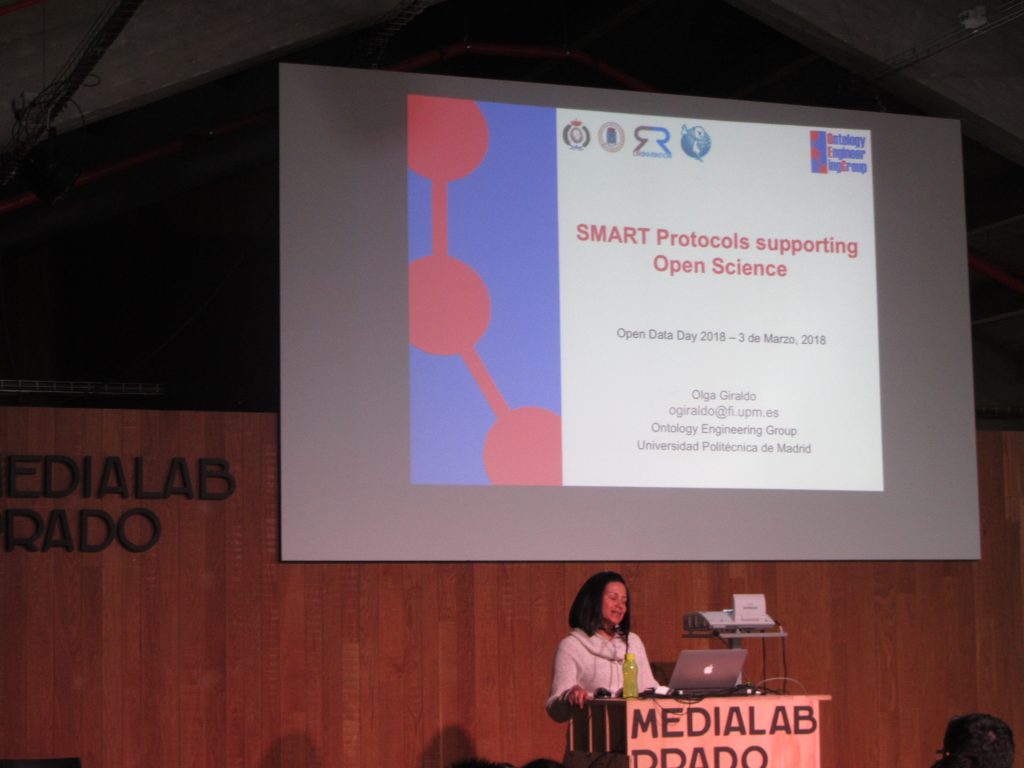 Afterwards, Mariano Rico told us about the DBpedia del español: how they got their data, how it’s edited, how they’re downloaded, how many datasets it has, when it started to function, etc. DBpedia contains an immense information repository, a full set of structured data that makes it the center of a world of data that has been edited with controlled vocabularies. This is, without question, a link between many vocabularies and a useful tool for all kinds of solutions, from visualizations to apps, whether for scientific ends, industrial ends or any type of business. Finally, Bastien Guerry outlined the work he does leading org-mode and his work as editor and responsible person of it working for the French government.

One thought on “Open Data Day: From entrepreneurship to open science”