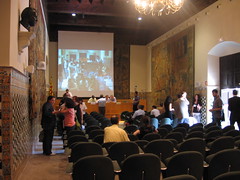 Last week I went to the Institut dâ€™Estudis Catalans in Barcelona for the Euroscience Open Forum Satellite Event organised by Science Commons. The event brought together together lawyers, scientists, policy makers, stakeholders and representatives from many different groups and organisations interested in open access and open data in scientific research from across Europe.

The event did a great job at reinforcing the sense of a shared pan-European vision for open science – which was articulated elegantly in their four recommendations:

While all of these areas are related to what we do at the Open Knowledge Foundation, the first, third and fourth of these are most relevant to our core remit and activities. We promote the Open Knowledge Definition as a standard for openness in scholarly literature and research data. Our CKAN project contributes to the open infrastructure for finding and re-using knowledge resources.

There’s a brief note on the Science Commons blog and Cameron Neylon of Open Wetware has posted some comments and reflections (1,
2, and
3). Below are a few further jottings about the event.