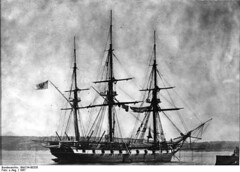 After the success of open everything Berlin last December (see documentation), the newthinking network and CC Salon Berlin teamed up to put on another event in Berlin last night:

After me was Sebastian Moleski from Wikimedia Deutschland talking about the large donation of images from the German Federal Archives to Wikimedia Commons:

Starting on Thursday Dec 4, 2008, Wikimedia Commons witnessed a massive upload of new images. We received nearly 100,000 files from a donation from the German Federal Archives. These images are mostly related to the history of Germany (including the German Democratic Republic) and are part of a cooperation between Wikimedia Germany and the Federal Archives.

These images are licensed Creative Commons Attribution ShareAlike 3.0 Germany License (CC-BY-SA). Wikimedia Germany and the Federal Archives have signed a cooperation agreement that, among other things, asserts that the Federal Archives owns sufficient rights to be able to grant this kind of license.

The donation received good press coverage (see articles in the New York Times, and Spiegel Online) and is an outstanding example of a cultural heritage institution making material available under an open license. (The other high-profile example is Flickr Commons. There’s an interesting blog post comparing the two here.)

To demonstrate CKAN in action, I created a commons-bundesarchiv entry for the collection.

Another interesting project I learned about was Valkaama – a movie where all the source material is openly licensed. (The creators have also been working on an Open Source Film Definition.)

If you’re in or around Berlin and interested in participating in similar events in the future, there’s a list of future events on the the Open Everything Berlin Mixxt Network. Also, if you want to stay in touch with people interested in all things open, see: