The film tells the story of a campaign to open up data about where money from the Common Agricultural Policy goes – from national Freedom of Information requests from the likes of Jack Thurston and Nils Mulvad, to the construction of FarmSubsidy.org, a website which hosts cleaned up and aggregated European CAP data. It looks at the history of European farming policies, as well as news headlines resulting from the disclosure of where money goes – putting the data into context.

Some of it was shot at the European Open Data Summit (you can catch a glimpse of the European Open Data Inventory on CKAN at around 5:45!) – and there is an emphasis on the potential of new forms of collaboration between journalists and data analysts. As an example, it looks at an investigate report by the International Herald Tribune, which built on Farm Subsidy’s findings.

The film discusses the value and importance of making data open. Journalist Brigitte Alfter argues that the public have a right to know where public funds are spent. European policy analyst David Osimo talks about how making data open allows it to be aggregated, analysed and visualised by third parties – which can facilitate richer and more meaningful exploration. Finally the film alludes to Siim Kallas‘s broader drive towards transparency in European institutions, and talks about how Farm Subsidy paves the way for more open access to official European datasets. 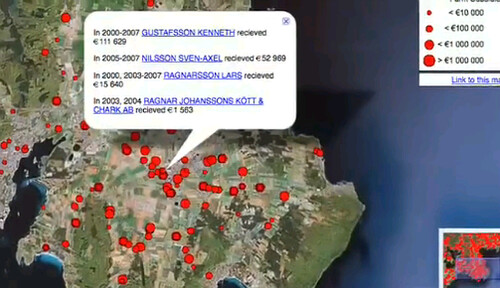