The Wave of Open Data

Open access to public sector information, or simply “Open Data” is gathering a lot of momentum these days. High profile initiatives such as the Obama administration’s Data.gov; and UK’s Data.gov.uk; whose main advisor is none other than Sir Tim Berners-Lee are leading the way towards the more transparent and open governments of the future. Fantastic examples of data journalism by leading newspapers such as the New York Times and The Guardian show us how the power of turning data into information can be put into the hands of readers themselves. And nobody has better demonstrated the power of Open Data than statistics super hero Hans Rosling in his famous TED-talks.

The trend is obvious, and even though its still early days, there is no doubt in my mind that this trend will spread from these few prime examples to the rest of the world. I’m pretty confident that a decade from now, any self-respecting government and multi-national organization in the world will have established an Open Data policy. To me, the rules are quite straightforward: “Any government data should be open unless other, higher priorities – such as privacy or national security – indicate otherwise”. There are obviously gray areas, but governments must flip around the ruling mind-set of “keeping data closed unless there are good reasons to open it” and instead “make data open, unless there are good reasons to close it”. This will make governments more accountable, leave less room for corruption, heighten the quality of any debate and empower societies and their respective economies.

In this piece I will try to explain the status of open data in my home country of Iceland. 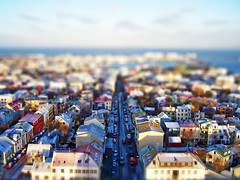 The first hints of a real Open Data mindset within the government probably dates back to the late 1990s, when Statistics Iceland – the local Statistics Office – concluded that their work was more valuable with open access to anybody, than in their then current model of selling access to their individual publications. This was made possible with the new delivery channel that was the internet, bringing down the cost of publication and distribution. This change was a success and today, many Icelanders, ranging from students to business leaders use data from Statistics Iceland to solve their everyday tasks and assignments.

Since, the topic has occasionally surfaced around limited topics of data, such as geospatial and mapping data, held by The National Land Survey of Iceland, fishing data held by the Marine Research Institute and weather data held by the Icelandic Met Office.

In 2006 the Icelandic “information act” was reevaluated and an updated legislation passed. In that process the reuse, redistribution and use of data by 3rd parties was openly discussed, but no major steps were taken.

In late 2007, an informal lobby group “Opin gögn” – which literally translates “Open Data” – was formed (full disclosure: I was a part of this initial group, and I may overestimate its importance in this story). Its purpose was to educate the Icelandic public sector and Icelanders in general about the Open Data movement, which was becoming quite visible in the “nerd” media at the time. In the spring of 2008, the group opened a Wiki-site – opingogn.net; (Icelandic only) with a reference to OKFN’s Open Knowledge Definition, and later a translation;. The site also listed various public and private sector entities that held important and interesting data, listed their databases / data sets and if and how that data could be accessed. An organization called Félag um stafrænt frelsi á Íslandi (meaning “The Foundation for Digital Freedom in Iceland”) or FSFÍ for short also started actively lobbying on similar notes. These ideas got some media attention and sporadic interest by different organizations and groups, but that interest can hardly be described as widespread.

In October 2008 the Icelandic financial system imploded. A banking system that was more than 10 times larger than the nation’s GDP all but vanished in 3 days. The currency devalued roughly 50% to our most common trading currencies, inflation went into the double digits, strict currency restrictions were put in place, the stock market lost over 90% of its value and foreign debt increased dramatically. All in all – rather a mess!

On top of this, investigations of the crash have continued to reveal negligence by regulators, mistakes in governance, failure by government institutions to take action, incredibly unfortunate series of events, miscommunication and seemingly fraudulent and criminal actions by key players in the Icelandic finance sector.

Not surprisingly, this has led to a demand for more transparency, more access to public data and more effective communication by the government. All of a sudden Open Data is seen as a high priority among various lobby groups, branches of government and in restoration planning. Non-governmental think-tank Ministry of Ideas – founded last year by a group of local entrepreneurs – currently lists Open access to public sector data as its #1 priority. Government and opposition politicians have learned the basic reasoning for Open Data and regularly refer to it in speeches. In December a rare cross-party parliamentary proposal (the first step in passing new legislation) was made, proposing a “default open” strategy for any public sector data. The Prime Minister’s Office has formed a committee that is to propose changes and improvements in legislation and suggest how to define the boundaries between data that is to be open and data that shall remain closed.

On a related note, a new initiative – the Icelandic Modern Media Initiative (IMMI) – has emerged. Involving prominent figures from the Wikileaks-project; and members of aforementioned FSFÍ, this initiative proposes to change Iceland into a sort of “Journalistic free state”, where the legal environment would be perfect for investigative journalism, whistleblowers and protection of journalists’ sources, to name a few characteristics. Not surprisingly, this initiative has received a fair amount of media attention (BBC, NY Times, The Guardian, GigaOM, …) and these main ideas have also been passed as a parliamentary proposal. Needless to say it is likely to seriously boost any Open Data initiatives were it to pass as legislation.

But there are also Open Data sprouts out there that have nothing to do with the top-down actions of the government or parliament. More and more organizations and private sector companies are buying into the ideology of open data and have started their own efforts. A recent example includes cooperation between the leading yellow pages company – Já; – and The Árni Magnússon Institute for Icelandic Studies, Iceland University’s research center for the Icelandic language. Sponsored by Já, the institute has made openly available (not fully Open as per the Open Knowledge Definition, at least not yet) a valuable language database that is a crucial ingredient for various language technology software such as spell-checkers, automated translation software and even Icelandic language word-games. Já also sponsored a prize competition to encourage developers to make use of this data. The response has been great, and the results of the competition are to be announced this Tuesday.

Even the private sector has started opening data. Some financial institutions – not the public’s favorite at the moment – have started publishing far more detailed information about their actions in order to regain trust and show that they have nothing to hide. Examples include pension fund Frjálsi lífeyrissjóðurinn, operated by one of the fallen (and now restored) banks. The fund is now publishing a detailed account of their assets online available to anybody.

All in all, Iceland is not that far down the Open Data path – yet – but it seems like the extraordinary events of the financial collapse may push us fast towards the forefront of the Open Data tidal wave. There probably be dragons on the way, but we also have a lot to gain!

4 thoughts on “Iceland: from the financial crisis to open data”