The following guest post is from Iain Hrynaszkiewicz who is Managing Editor at leading open access journal BioMed Central and a member of the Open Knowledge Foundation’s Working Group on Open Data in Science.

All followers of this blog will know that science publishing now goes much beyond the traditional, IMRaD, journal article. As collective consciences are raised about data sharing it becomes an increasingly important part of the research and publication process, but great heterogeneity in the availability of data underlying peer-reviewed articles remains – arguably even more so in the availability of truly open data.

So in recognition of the challenges overcome by scientists who have shown leadership in openly sharing scientific data, particularly when sharing goes against cultural or community norms, the open access publisher BioMed Central last month launched its Open Data Award.

The focus of the shortlisted articles, which were announced last week, is primary research articles that include potentially re-usable data as either additional files with the journal article or via a link to publicly available data hosted elsewhere. As well as many examples from fields that have collectively begun to recognize the benefits of openness, such as genomics, nominations were received across the full spectrum of BioMed Central’s 200+ journals. A number of articles presenting tools, policies or software to encourage data sharing were also published by BioMed Central in 2009, and this is reflected in the make-up of the shortlist.

A further update will follow after the winner is announced, at London’s Gherkin landmark, later this week. 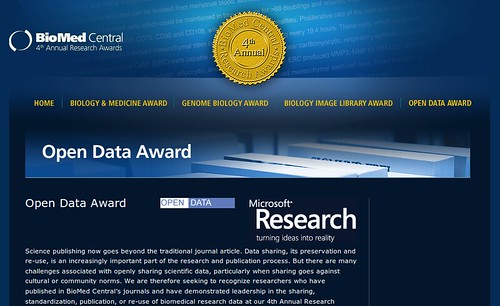 1 thought on “BioMed Central Open Data Award: winner to be announced this week!”