We are delighted to announce that the authors of the Panton Principles have been awarded the SPARC Innovator prize!

The principles are currently maintained by the Open Knowledge Foundation’s Working Group on Open Data in Science.

Science is based on building on, reusing, and openly criticizing the published body of scientific knowledge. For science to effectively function, and for society to reap the full benefits from scientific endeavors, it is crucial that science data be made open.

That’s the belief of four leaders who have put forth a groundbreaking set of recommendations for scientists to more easily share their data – The Panton Principles – and who have been named the latest SPARC Innovators for their work. […]

The authors advocate making data freely available on the Internet for anyone to download, copy, analyze, reprocess, pass to software or use for any purpose without financial, legal or technical barriers. Through the Principles, the group aimed to develop clear language that explicitly defines how a scientist’s rights to his own data could be structured so others can freely reuse or build on it. The goal was to craft language simple enough that a scientist could easily follow it, and then focus on doing science rather than law.

The Panton Principles were publicly launched in February of 2010, with a Web site at www.pantonprinciples.org to spread the word and an invitation to endorse. About 100 individuals and organizations have endorsed the Principles so far.

“This is the first time we’re seeing diverse viewpoints crystallize around the pragmatic idea that we have to start somewhere, agree on the basics, and set the tone,” says Heather Joseph, Executive Director of SPARC (the Scholarly Publishing and Academic Resources Coalition). “The authors are all leading thinkers in this area – as well as producers and consumers of data. They each approached the idea of open data from different directions, yet with the same drive to open up science, and ended up on common ground.”

According to Pollock, “It’s commonplace that we advance by building on the work of colleagues and predecessors – standing on the shoulders of giants. In a digital age, to build on the work of others we need something very concrete: access to the data of others and the freedom to use and reuse it. That’s what the Panton Principles are about.”

Further details, including more background information and comments from other leading voices in the open science community, are available at:

Alma Swan comments, quite rightly, that:

Coming up with the Principles is not going to cut the mustard by itself. They will need to be advocated and promoted so that scientists are interested in debating them.

If you’re interested in helping to promote the principles to scientists in different domains, to research funding bodies, or to the general public, please introduce yourself on our open-science mailing list. 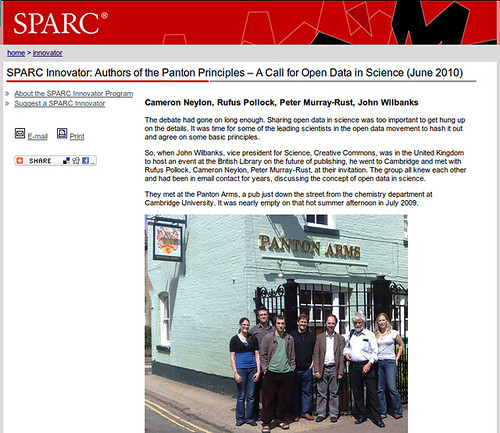