The following guest post is by Zuzana Wienk, from the Slovakian watchdog the Fair Play Alliance. She is also a member of the Open Knowledge Foundation’s Working Group on Open Government Data

When we started to build a data catalogue of all possible flows of public finances to the private sphere in 2003, we had no idea it would be a perfect fit with the open data movement’s efforts. As former journalists, we simply saw the great advantage of having all kinds of public data (freely accessible thanks to the freedom of information act) brought together in a searchable database format. After years of FOIA requests and litigation, Fair-Play Alliance now offers the most comprehensive catalogue in Slovakia. We track flows of public money (subsidies, tenders, EU funding, grants, tax pardons, political sponsorship etc), as well as information on people in the public domain (e.g. elected officials, management of state institutions or state controlled companies, advisors in politics). 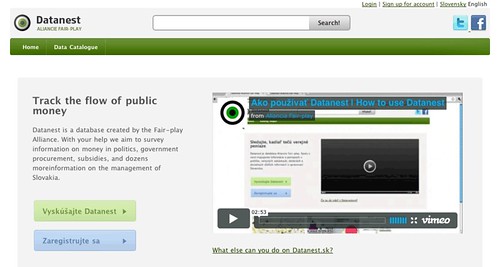 For years the database served as a tool for our investigations (e.g. matching data on political sponsors with procurements results), and has been used by investigative journalists within Slovakia. But only fairly recently have we discovered the synergy with the open data movement, and the common interest with coders. Our first hackday last autumn – a two day marathon of coding and design on the database – produced promising prototypes of new applications ranging from so-called “political funds” (authors discovered how much political sponsors of particular parties got “in return” from state budget), to the concept of a portal for the publication, sharing and investigation of public contracts that started to be released by the government in large quantities just recently.

At the moment we are finishing reprogramming of the service, which is available at www.datanest.sk in its beta version including search functions, the whole catalogue and basic API. Data audit has shown serious flaws in governmental data quality so our efforts will concentrate on data cleaning and on lobbying for new standards in Slovakia, that we put together within a civic coalition of our watchdog, coders, and IT community. 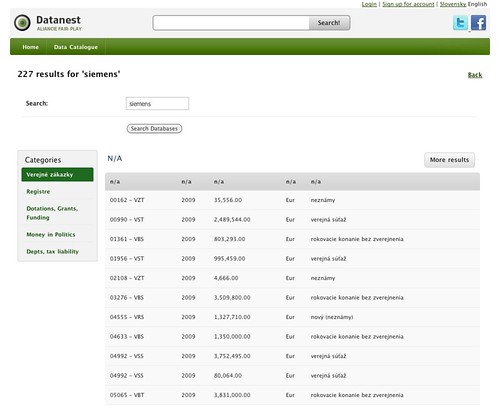 A search result for Siemens. The company was found in four data categories. Displayed are all the company’s winning bids in public tenders in years 2005-2011, plus EU funding received by the company to educate its employees, and also gifts the company made to public bodies, and its debts on custom duty.

We will soon publicly launch a new service – a mash-up of part of our database (public tenders) and an interesting independent project of visual register of companies named www.znasichdani.sk (“fromourtaxmoney.sk”). Users can enter any name, and find detailed information on all public tenders awarded to companies of persons with that name. The Slovak web register of companies does not work with unique personal IDs and does not contain information on date of birth. We therefore currently have to work with names and addresses that may change with time, even if they belong to one person. The mash-up leaves it up to visitors to select the preferred address fit from the offered list and only connects names and addresses with a perfect match into one search result.

Part of a search result for one of the biggest political sponsors according to Slovak media. It shows results for two of his companies (where he registered the same address) – Chemolak and Vahostav. It shows a breakdown of total winning bids between concrete years and displays his position within the particular company over years – green line – in these cases a statutory. 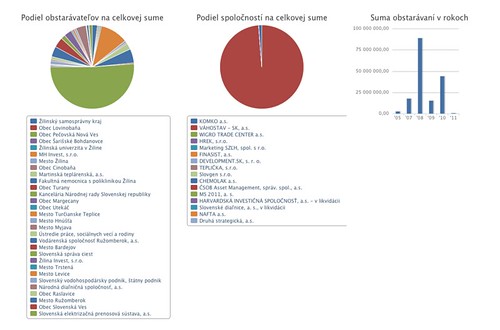 Last part of the search result, displaying his business connections in a FOAF format. Visitors can also run a time analysis to see how connections changed – e.g. around important tenders.

Our last IT project aims to change the poor legislation regulating conflict of interest and disclosure. NGOs tried many times to amend this constitutional law, which only binds elected officials to disclose very general and vague information on their property, but there was never a significant “political will”. We therefore built a portal, www.politikaopen.sk (“openpolitics.sk”), that offers space to politicians to publish quality disclosure information voluntarily. After three years of hardship the project now displays profiles of speaker of the parliament, the prime minister, and a couple of influential ministers and MPs. One political party made joining the project a mandatory condition for all its candidates in any elections. We hope that over the coming years we will be able to convince enough politicians to join the project that it will become a standard accepted by constitutional majority in parliament. 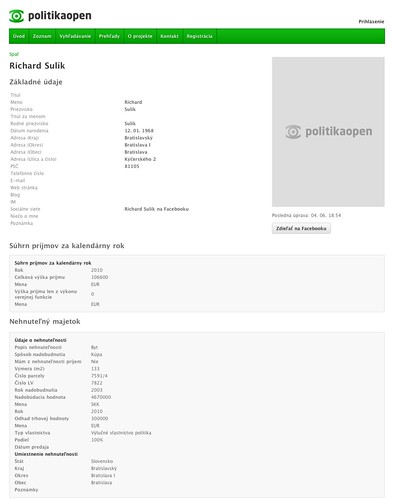 Part of the profile of Speaker of the parliament – his personal data, details on his apartment and his income. It also displays when it was last amended, and a facebook share button.