The following guest post is from Regards Citoyens, a French organisation that promotes open data. 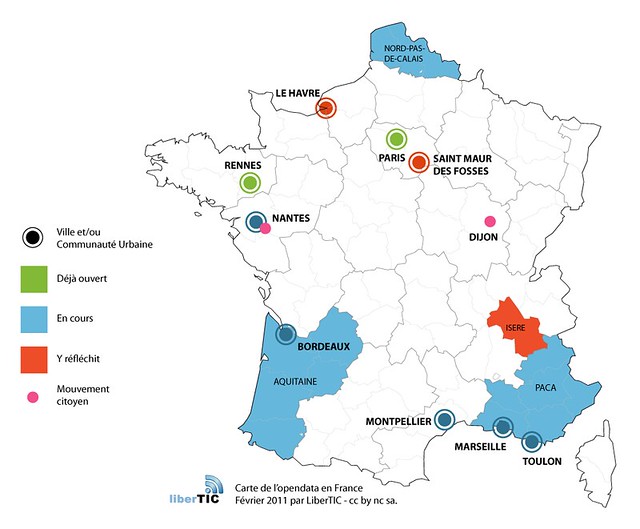 Three months ago, the French Prime Minister announced officially the creation of the EtaLab governmental team, dedicated to the future data.gouv.fr. On Friday May 27th, two official texts have been published: a decree (fr) that defines new juridic rules regarding data licencing, and a circular (fr) intended to all administrative services to precise the processes of data release on the future platform.

The good news is that the lobbyists in favor of paying data lost this battle: free of charge data will be the default rule for new datasets as well as for currently paying data which wouldn’t be registered as such by July 2012. The decision to keep fees on some datasets will have to be discussed by an official commission — unfortunately its board offers a disproportionate representation of private data sellers — duly motivated and officialised by an individual official decree from the Prime Minister. Every paying dataset will further have to be listed on an official repository of paying data. It is sadly still unclear whether this repository will be part of data.gouv.fr. Will real open data be intermixed with paying data on the platform?

Every other data should be released freely under the conditions of a new licence that will be drafted and discussed in the next few months and released by August 24th. The circular states that this licence should follow the free and open principles, even though its designers never took part in the writing of such a licence in the past. We will actively follow this process in order to push for a total compatibility with open data principles such as the Open Knowledge Definition.

Much worse news would be the exclusion from these rules of public administrations with commercial objectives (EPIC) and public service delegations to private businesses, such as transport companies. The circular also offers the possibility for administrations to write their own licences in order to meet some specific, unspecified needs: this might lead to an increasing number of slightly incompatible licences, with the risk of having some datasets undermined by non-commercial clauses.

At last, the circular mentions file formats. It is heartwarming to read the recommandation to use a list of various open formats such as CSV, XML, KML or ODS. It is unfortunate though to read ODS mistakingly listed as a text document format, or to see also the discriminatory format XLS proposed for spreadsheet documents.

To conclude, these official texts are a real progress which strongly encourages French administrations to open their data. But some serious risks remain, and Open Data shall not be restricted to free of charge datasets: open formats and free licences have to be the core of EtaLab’s coming work.

One thought on “data.gouv.fr to promote free public data”