The following guest post is from Niels Erik Kaaber Rasmussen, Founder of ItsYourParliament.eu and member of the OKF’s Working Groups on EU Open Data and Open Government Data.

Most people are unaware that the political parties they know from their national parliaments behave differently in an European context. Two Danish parties for example belong to the same political group in the European Parliament while in Denmark one of them is a governing party and the other in the opposition. Some of the issues discussed in the European Parliament are the same as in national parliaments but often the alliances are different. 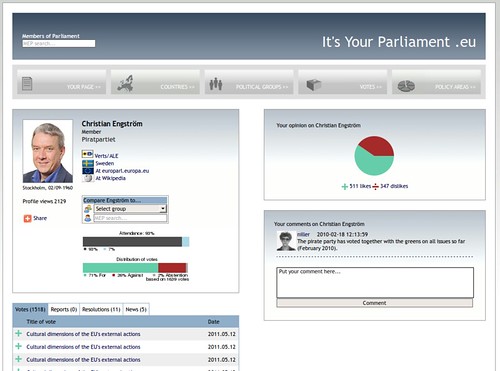 To obtain the underlaying data I had to find the lists of roll-call votes in the minutes of each plenary session held in the European Parliament. A simple scraper was build to collect the relevant files that are available in Adobe’s PDF-format and Microsofts Word-format. In each file multiple voting results are compiled. For each vote there is a long list of names of the politicians (MEPs) who voted for, against or abstain. I build a parser to read these files and organized the results in a database. Doing this job by hand would probably take more than a full months work and be amazingly boring.

To complicate things the listing of MEPs is not totally standardized. Most often MEPs are listed by their family name, sometimes their full name and in a few cases you have to make a guess to know who the MEPs is. For example the French MEP Jean-Maris le Pen and his daughter Marine le Pen are both members of the European Parliament and obviously they have the same family name making it hard to distinguish them from each other.

For the purpose of displaying meta data on each vote and to group votes by policy area we build a crawler to request information on the documents using the European Parliament’s search engine OEIL. OEIL collects meta data on most votes and has dossiers available in XML-format making it rather easy to parse for our script. 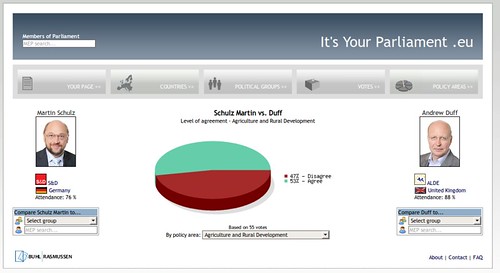 On top of the data we build It’s Your Parliament with comment forms and a very simple voting system for users to have their own say on the issues discussed in the parliament. The feedback we got after releasing the site told us that people was more interested in the data itself than to engage and interact at the site. Shortly after we therefore added an API to the site. The idea behind the API is to let others benefit from the work we have already done. With the API people are not limited by our interface at itsyourparliament, they can make their own.

We have collected the data, structured it and linked it together, but the data itself does not really belong to us. The data that does legally belong to us we have published under the Open Database License (ODbL) meaning that you should at least not worry about our rights when reusing the data through our API.

The API can be used by lobbyists, NGO’s, scientists and journalists to obvious tasks like to monitor selected MEPs, to compare actual voting to the promises made, or highlight hidden alliances or conflicts, but also it can be used by app-developers to develop new services perhaps in combination with other datasets or existing systems.

European Union politics tends to be a complex matter – I am sure that everyone who has ever worked with politics in relation to the European Union will agree on that. Perhaps the API with its data can serve as a step towards a better understanding of the important issues and towards more transparency and openness in the Union.

1 thought on “Opening up data on the European parliament”