Jens Finnäs is a freelance journalist based in Helsinki, the author of Dataist, a blog about data journalism, and a member of the OKF’s Working Groups on Open Government Data and EU Open Data.

Parliamentary elections in Finland are usually rather dull. Rarely does the rest of the world bother to pay any attention. But this year was different. The elections in April were the most exciting ones in decades with the incredible rise (from 5 to 19 percent) of the populist party True Finns as the main attraction. But the intricate political puzzle that followed the success of the True Finns was not the only source of excitement in the elections. Especially not if you happen to be an open data enthusiast.

The by-product of these applications is a very interesting set of data. Here you got all the opinions of (almost) all the candidates gathered in an easily accesible format. I don’t know about you, but this surely gets me going.

Up until now this data has been a completely vested resource. The news rooms have kept it to themselves and not managed to take the analysis past the level of “lets see what the candidates think about nuclear power”. But this year things changed. The leading newspaper Helsingin Sanomat decided to publish their data openly a week before the elections. And within a couple of days The Crowd (bloggers, programmers etc.) managed to do more with the data than journalist had done in fifteen years: 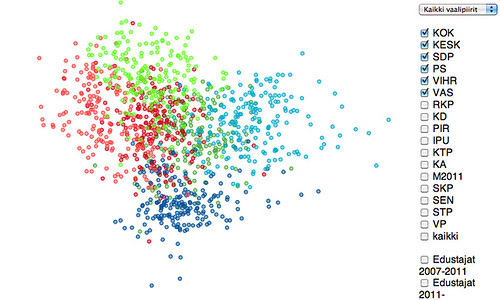 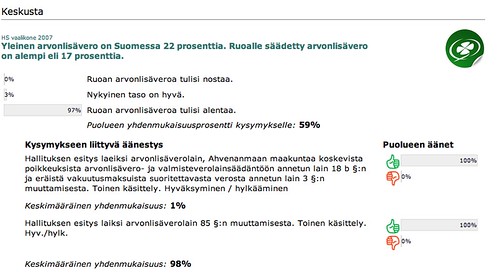 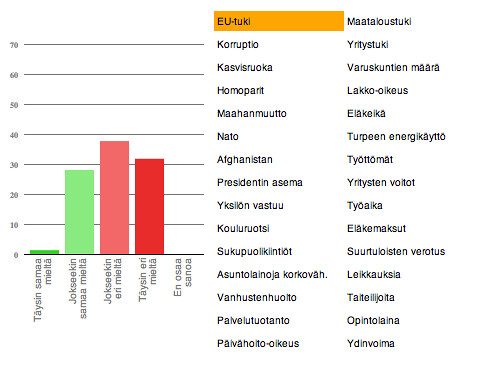 A few weeks after the election the public broadcaster YLE followed the example of Helsingin Sanomat and published their data as well.

Journalism is changing. The immediate reaction of a traditional journalist is often resistance when someone asks a newsroom to publicly share data. “Someone might steal a story that we haven’t yet done!!!” argues the Journalist 1.0.

But it is time to realize that journalistic output does not only have to be 700 word stories, neatly structured with headings, preamble and text. Journalism can also be publishing a set of data that will be refined and possibly developed into new stories by readers. As the case of Finland shows, there is still a great amount of unused journalistic potential in The Crowd.

1 thought on “How open data improved election coverage in Finland”