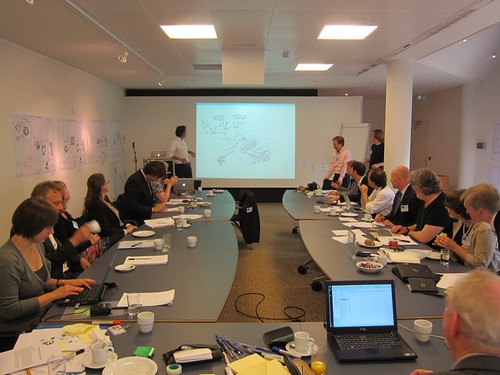 Last week I went to an excellent workshop on open metadata organised by Europeana. The workshop drew together directors from libraries, archives and cultural heritage organisations across Europe – such as the British Library, the Deutsche National Bibliothek, the UK National Archives, the National Library of Ireland, the National Library of Lithuania, the Rijksmuseum, Statsbibliothek Berlin and many others.

From the blurb about the workshop (my highlights):

During the past couple of years the call to make (meta) data openly available for re-use, especially in the public sphere, has gained a lot of momentum. We see this reflected in many initiatives such as the Open Data Challenge, Share-PSI and recently a number of institutions that have started making their records available as Linked Open Data (see for example the British Library).

Europeana is also in the process of redesigning the data exchange agreements with our partners to reflect this new paradigm. To a large extend the plans we have formulated in our Strategic Plan are dependent on agreeing on a much more open license on the metadata held in our repository. During a lengthy consultation process we have gained a lot of insights and arguments from our network on the reasons pro and con. What we have not done before is to put the cultural institution central in this equation, by looking at the impact on the business model of a cultural institution when it makes its metadata available under a non restrictive licence (CC0 or CC-BY-SA). What are the main benefits that can be expected? What new channels will become available? Will this diminish the potential earning capacity of the institution? These are the types of questions we would like investigate with you.

Through in-depth discussions and group exercises, the workshop drew out and explored lists of risks (e.g. loss of income, brand and attribution) and benefits (e.g. new collaborations, partnerships, expertise) associated with openly licensing metadata. Explicitly drawing out and exploring risks was particularly interesting, and the workshop gave participants the opportunity to discuss and address their concerns thoroughly. Someone helped to produced drawings to capture the topics discussed in real time: 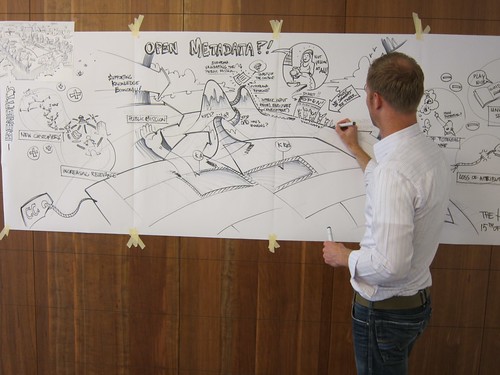 One theme of the workshop was how the cultural heritage community can build a better base of evidence to support switching to open licensing models for metadata about works. As the director of a national library put it:

Everyone sees the opportunities in relation to open data, we just need better arguments to address potential risks.

Participants said that there was a general willingness to take risks associated with switching to an open data model – despite things like potential loss of direct income – because the potential benefits outweigh these risks. But there was a need for stronger arguments and evidence to convince others in the sector. There was a strong sense that the risks of opening up are relatively short term, whereas the benefits are medium to long term.

Bill Thompson from the BBC pointed out that metadata holders were often tempted to overstate the value that could be derived from selling their data. In response to this he said:

Potential income is often not real income. Board members imagine that digital rights can mean big money, but often they are wrong.

Participants discussed how opening up metadata – allowing this information about collections to be reused by others – was part of the public mission of cultural heritage organisations. This creates opportunities for enriching the data, increasing relevance, and attracting new users to online and physical collections. As one participant said:

The more you open up, the more customers you attract, the more relevant you become.

Everyone agreed that it was worth building up a stronger base of evidence – of open data success stories – that would encourage and inspire more cultural heritage organisations to consider opening up their metadata. Representatives from Europeana said they would be doing something in this area soon.

You can find some photos from the workshop here. We’ll post links to further documentation and coverage here as soon as they become available!

If you’re interested in open metadata, you may wish to join our open-bibliography and open-heritage mailing lists. 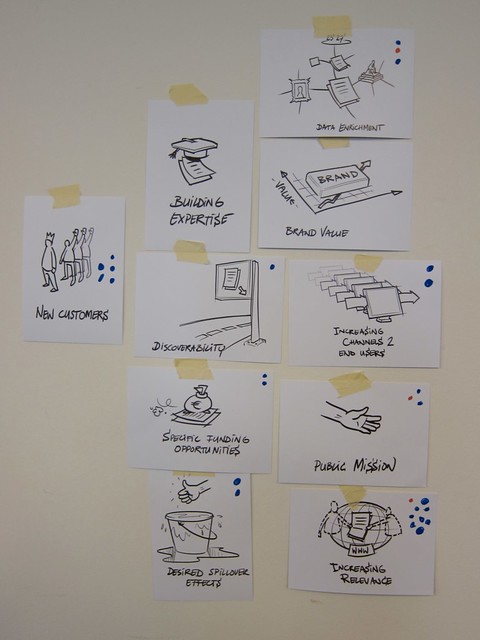