The following guest post is from Tom Steinberg, Director at mySociety. 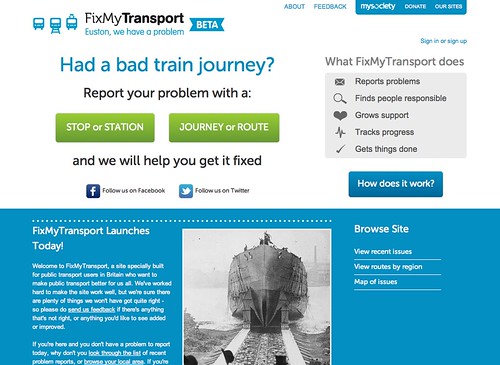 The organisation that I run, mySociety, has just launched our biggest project in three years, and as open data hackers I thought it might tickle your fancy.

FixMyTransport.com has been built with two goals – to make it easier for people to report public transport problems across Britain, and to coax people over the line between complaining about something and campaigning on it. It’s first and foremost a user-focussed problem solving site, and only latterly an open data project.

However, it is still an open data project, and quite a whopper at that. When we started development, 18 months ago, half the datasets we needed were expensive (£10,000), hopelessly messy, or non-existent. Through a combination of a lot of programmatic data scrubbing, a bit of crowd-sourcing and the general drift in government towards open data, we have been able to pull together an unprecedented public transit database. We’ve got over 300,000 stops and stations, for example (basically, all of them), plus routes with basic route maps covering trains, trams, tube, metro, buses, coaches and ferries. We’ve doubtless still got all sort of data problems left, but hopefully exposing all of these nodes and routes as nice, stable URLs with attractive SEOd HTML and Facebook open-graph friendly metadata will not only see more re-use but, when the data proves to have inaccuracies, we hope it will strengthen the case for the public sector publishing this data in the right way in the first place. We’ve also a lot of volunteers to thank for helping build the first ever database of contact details for transit companies and operators – without this we’d never be reliably able to pass on problem reports, and they’d sit uselessly on the web. I would like to think that in time the data that underpins FixMyTransport will ultimately be accessible via something akin to mySociety’s Mapit.mysociety.org for boundaries.

There is, however, a second open data angle, and one that most of our users will probably find more interesting. We’re building on the WhatDoTheyKnow.com model of automatically published email exchanges so that it is possible to see all the exchanges of email between the original complainant and the transport operator, just check out the bottom part of this page to see an example.

This is useful for all sorts of reasons, partly because it gets recent status information that might otherwise be hidden inside operators out onto the Googleable web, and also because it create a dicencentive for operators to send emails simply designed to make email authors go away.

But the main point of this post is to say that it is only a major open data project because that’s what’s required to offer a super-simple, super-usable user experience for users with everyday problems. We think that’s what open data is really all about – offering raw materials to build services that really matter.