This post is by Lucy Chambers, Community Coordinator on OpenSpending. It is cross-posted on the OpenSpending blog.

On Friday, the Guardian Poverty Matters blog published a piece on the Uganda visualisation that the OpenSpending team had been working on with Publish What You Fund. 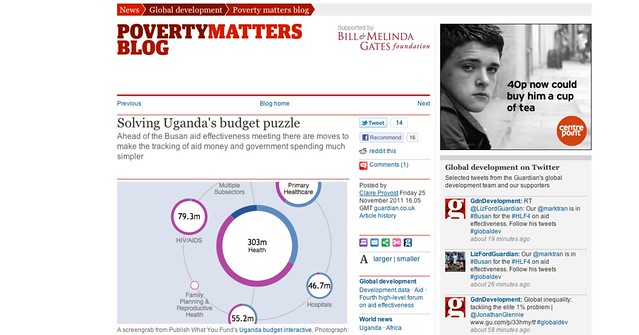 “The Publish What You Fund campaign group and the Open Knowledge Foundation have now produced a visualisation of Uganda’s aid and budget data for 2003-2006, billed as the first time both sets of data have been displayed together in a way that is easy to explore. A quick look shows just how big a piece of the puzzle aid spending is – more than 50% of overall resources available in Uganda for 2005-2006. The vast majority of this $1.1bn in aid was spent directly by donors on various projects, with only a third given to the government to spend along with its domestic resources. Interestingly, aid money made up only a small proportion of resources for education, while accounting for the majority of resources for health, agriculture, water and the environment.”

The release of the visualisation comes ahead of the Busan aid effectiveness meeting and highlights some of the key benefits of opening up spending data, both to the donor organisations and the governments of the recipient countries themselves:

“Four years ago, researchers at the London-based Overseas Development Institute took up the enormous task of trying to figure out how dozens of donors were spending aid in Uganda, and how that compared with where the government was allocating its own resources. The results were striking: it turned out the Ugandan government was only aware of half the aid being spent in the country, despite routinely requesting this information from donors.”

It is hoped that visualisations such as these will make it easier to digest complex datasets of this type, where a government receives support from multiple sources. It is also hoped that discussions around the topic will result in the more timely and regular release of data to help highlight practices that will lead to aid money being most effectively spent.

Read the full Article in the Guardian Poverty Matters blog.