Austria is one of our incubating OKFN:LOCAL chapters in its last stage before full incorporation. Its core group of organisers in Vienna are planning an OGD BusinessDay2012 on March 22nd in Vienna and the OGD2012 Conference on June 26th in Linz, Austria. For updates and more information, go to http://gov.opendata.at/okfo/index.html. 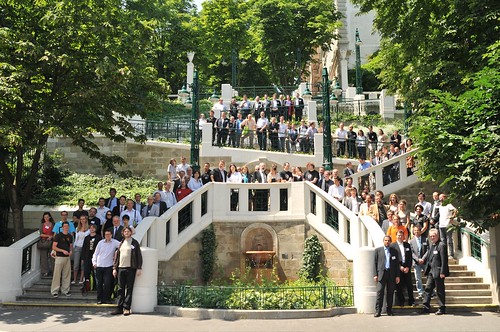 The OKFO – the Open Knowledge Forum Austria was founded in early 2011 in Vienna, Austria. The objectives of this not-for-profit organisation are to promote, initiate, and accomplish activities around openness in Austria, and to actively co-operate with and be part of the international networks around Open Data, Open Science, Open Culture, Open Commons and Open Government (and a little bit of Open Source)!

The OKFO has 2 organisational bodies: an advisory board and an executive board consisting of people coming from several institutions and organisations interested in the area of open knowledge: academia, media, industry & business, politicians, students and private people from civil society.

One of the main goals of the OKFO is to push Open Data in Austria forward as part of the happening worldwide open data movement! Thus we supported the City of Vienna to launch their data portal in May 2011, as well as the City of Linz for their data portal launch in October 2011. Furthermore the OKFO organised the first Open Government Data Conference in Austria – OGD2011 – on 16 June 2011 in Vienna (supported by the City of Vienna), with about 130participants – where international open data evangelists like Rufus Pollock (OKF), John Sheridan (UK National Archives) or Ton Zijlstra (ePSI Plattform) discussed topics around open data with local Austrian stakeholders from politics, public administration, civil society, academia, media & industry.

Furthermore we managed four one-day stakeholder workshops with Austrian representatives of the four main stakeholder groups for open data: politicians, citizens, civil servants and industry/economy in early 2011, to evaluate the open data requirements of these very different groups. The results of these workshops together with a lot of additional information was published as the Open Government Data Weißbuch (für Österreich) – “Open Government Data White Book (for Austria)” – providing basic literature on the topic of Open (Government) Data in the German language.

The OKFO is also supporting the open data blog of the Austrian online media futurezone.at, suggesting relevant topics to the editors as well as creating blog posts continuously. Besides this, the OKFO website is the main resource for information – and the OKFO is operating the Austrian instance of CKAN! We are also supporting national and international hackathlons & hackdays on open data, organising local meet-ups for international hack days (such as the Eurostat Hackday), and organising and supporting local events working with local data.

We are an invited expert in the Cooperation OGD Austria – a co-operation between public administration of the national government, the Cities of Vienna, Linz, Graz and Salzburg, and hopefully very soon the first participating province – the province of Upper Austria. Being invited experts means we work together with the Cooperation on open data recommendations for Austria, for example publishing recommendations on how to use open source software, on a harmonised meta data standard for Austria (currently also being discussed with Germany and Switzerland for harmonisation), or on using CKAN and and CC-BY licensing as nationwide defaults for open data.

Taking a look into the near future of 2012, the activities of the OKFO are as follows:

and many many other activities that for sure will arise in the course of 2012!

Hopefully this article gives you a rough overview of our OKFO activities and objectives – we are happy to get in touch with you on the topic of open knowledge – and all of you are very warmly invited to participate in our OKFO events in 2012!