This is a shortened version of a post from the OpenGLAM blog, where you can keep up-to-date with goings-on around open data in heritage and arts. 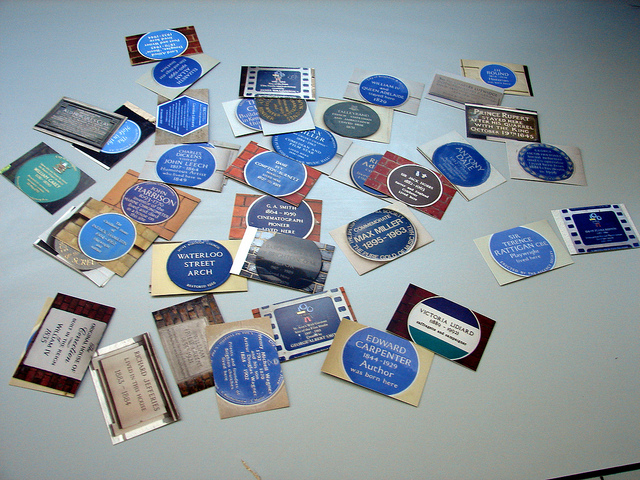 Historical plaques by their very nature are objects in the public domain, so creating a platform to collect them with the public – and for the collected data to be available for the broadest possible public use – seemed an obvious starting point. That’s why Open Plaques data has been open data from birth.

Those little historical markers dotted around buildings and other places we see everyday are physical portholes through time, connecting past and present. The caveat being, our experience of them is largely fleeting, easily forgotten. Even in the UK a myriad of bodies large and small put up plaques, and the digital data provided is mixed, often non-existent. But what if each encapsulated story was instantly accessible, its backstory and context linked? How would our experience of places change if we could knit plaques in the material world together with the fabric of the web?

‘We’ is the operative word with Open Plaques, a project born out of two basic thoughts: how could you feasibly tackle collecting all these plaques together and what could be done with the tapestry of stories then woven if the data was open?

What the journey so far has made clear to us is this: open data is great, but just being open isn’t enough. You need to be either (a) vitally useful enough to attract resources to pour into your service, or (b) interesting enough to attract sufficient people who care about what you’re doing and enjoy helping. We fall into the latter category; a plaque map doesn’t save lives or make the trains run on time after all. But without one or both of these drivers it’s just inert data, unlikely to grow and going nowhere. And even if you have (a) or (b), it’s still (c) a lot of hard work. But being a Type-B open data project, we’re also highly motivated

Our community of contributors, collaborators and supporters is an enthusiastic mish mash of people who like collecting plaques, playing with cultural data, finding out about history, supporting heritage and tourism, curating archives, exploring their area and further afield, and learning by having fun whilst discovering and mapping these noteworthy objects that dot the landscape. Having said that, the data we’re gathering is far from trivial and tells us huge amounts about our surroundings and past and present-day world. It’s a goldmine of location-based history. 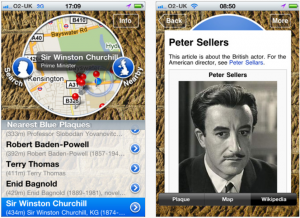 Apps built from our data so far include two iPhone apps from Radical Robot and London Smartphone and another forthcoming from PlaceWhisper, a Kindle ebook ‘London’s Blue Plaques In a Nutshell’, and an optical character recognition (OCR) challenge. Our data has also been used at History HackDay 2011, and loaded into a TomTom satnav. A further new app is in the pipeline. Read more about the apps here.

These are a mixture of free and paid for services but as the core database grows, especially beyond the UK, so does the potential for other interesting re-uses. Recently Ireland has seen an increase in listings – with two sizeable datasets contributed by Limerick Civic Trust and Waterford City Council, and purely community-driven growth in Dublin. Other big clusters already exist in our New York and Toronto listings. These are historic cities that could benefit from savvy re-use of the data, whether by tourism bodies, cultural organisations or local entrepreneurs. We are here to facilitate them.

At the end of February, the histonauts2 pervasive gaming event demonstrated the scope for re-using and contributing data creatively. Held as part of Manchester Histories Festival, the organisers simply referred to our online list of unphotographed Manchester plaques, and set daily missions for people taking part in their digital treasure hunt around the city to find and photograph the plaques. They posted the resulting pictures on Flickr with CC licenses, and added the relevant machine tags. The upshot being the players augmented our data whilst tracking history in the real world, and 20% of the unphotographed plaques locally got an image!

The data is there if you want to look at it, published under ‘Public Domain Dedication and License 1.0′. Or you can help us build it – add new plaque listings and photos if you find any, or contact us about contributing to the web development. We’re a museum of the street, and we’d love to get more organisations and individuals contributing to the collection.

So feel free to unlock your inner plaquetivist!

Shaping digital content and building online and offline communities in the UK and globally has taken me to some interesting places over the last decade. My current focus centres on innovation and collaboration in the digital heritage space.