There is a popular expression in Spanish that says, ‘en boca cerrada no entran moscas.’ Its equivalent in English is ‘loose lips sink ships,’ basically meaning that you are better off just keeping quiet. This culture of secrecy, some would say discretion, is particularly true in Spain’s public administration, being traditionally pervasive at all levels. Information is too important a power resource to let go of easily. Yet, as in other countries, changes in the information environment brought about by the Internet are forcing authorities, though painfully slowly, to open their ‘papers’ – aka public sector information (PSI) – to the public . A key dimension of this opening is the publication of data by the government. In Spain, it is the regional governments, particularly Basque Country and Catalonia, that have been more emphatically pushing open data agenda.

In accordance with EU directive 2003/98/CE on the re-use of public sector information, Spain passed Law 37/2007 on 16 November 2007, but its implementation has been deficient and limited. In October 2011, the Spanish government adopted a Royal Decree implementing the Law 37/2007, taking into account the experiences and practices of its first years of application. This new regulation is an important shift in the principle of publication of public data in Spain, for it states that “data should be open and available by default and exceptions should be justified.” Spain opened its national open data portal datos.gob.es at the end of 2011. And yet still Spain doesn’t have a coherent policy for opening data.

It is in some Spanish regions where we can find more advanced initiatives towards open and reuse of PSI. The Basque Country has been a pioneer in opening their data with the launch of the Euskadi’s OpenData portal in April 2010. In Catalonia, the Parliament passed the Law 29/2010 on the use of electronic means in the public sector, which promotes the use of these means throughout the entire public sector. In November 2010, the Generalitat (Catalan regional government) opened its own open data portal Dades Obertes. At local level, a few big cities have opened their own portals: Barcelona, Badalona and Lleida.

Out of all these initiatives it’s worth highlighting, for their quality and breadth, Generalitat’s Dades Obertes and the Barcelona open data portal. The Gencat Dades Obertes – published in Catalan, Spanish and English – puts together all the Catalan government’s open data initiatives into a single catalogue, and adds the most important information associated with them for reuse purposes. Data available on the site is very extensive and varied – including data on the 26,000 public facilities in Catalonia and 1,400 procedures handled in the Gencat’s offices -, and also includes lots of visual data – videos, images – and maps and other geographic data. This data is given in many different types of formats, and it’s available for reuse under four different licenses depending on its type and source, including two Creative Commons licenses. This portal also dedicates some space to feature applications made using the data available. Barcelona’s open data portal opened with 500 data sets classified in five broad themes – geography, demography, economy, city services and utilities, and administration – in various formats (csv, pdf, rdf, xls, xml and other). Licenses to reuse the data are mostly based on Creative Commons. 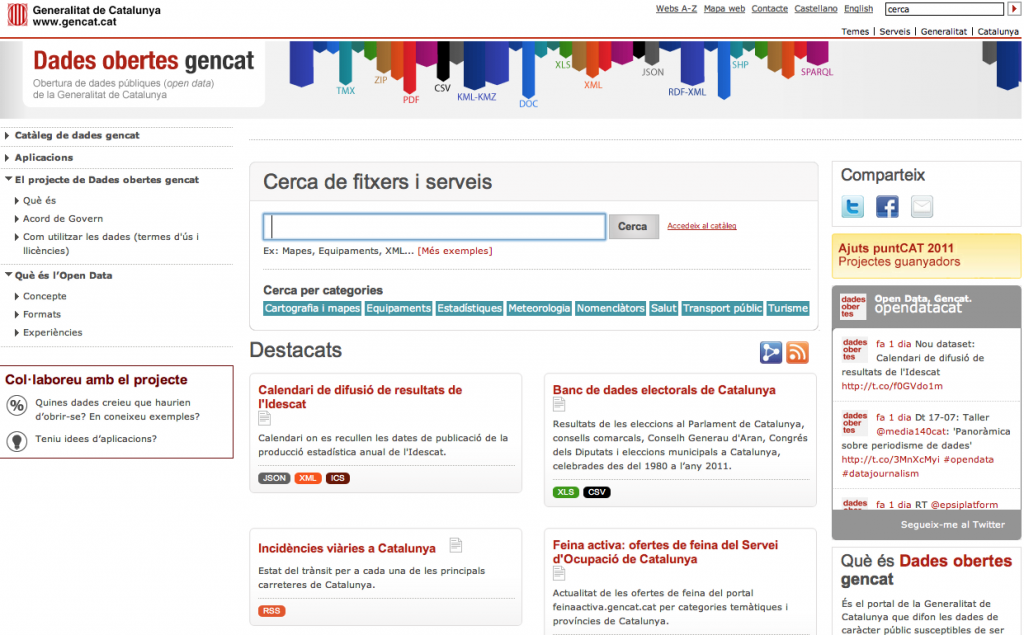 In Catalonia a culture of open information is slowly emerging. Yet it is not enough. First, like in the rest of Spain, “new” things happen only when they have been proved somewhere else. Second, the community of programmers in Catalonia, if such a thing can be said to exist, doesn’t seem to be interested in open data – or at least those that are interested seem to be few, not enough to push the open data into the political agenda with the same energy as in other countries. And third, the economic crisis, affecting particularly Spain and its regions, is certainly not facilitating the governments – national, regional or local – to implement policies to open public data.

In March 2012, the Spanish government introduced a bill on access to information, Ley de Transparencia, Acceso a la Información Pública y Buen Gobierno. In general terms, this bill lacks ambition and it’s very restrictive of the right to access to information, limiting it with a wide array of exceptions that go beyond accepted international standards. More specifically, concerning open data and electronic access to public sector information, this bill is just inadequate to regulate it and create a robust framework in which public, business and civic initiatives can flourish using the large amounts of data that governments produce. Leaving a fragmented regulation with the abovementioned Law 37/2007. Like other Spanish regions – notably Navarra, where an ambitious bill was introduced in January 2012 – the Catalan Parliament is currently discussing the writing of a bill to protect the right to access information of citizens and the publication of open data as emanating from this right. This bill is necessary for building a transparent, efficient and accountable government, and a society that can reutilize this data for emerging, new and creative applications. Nonetheless, according to some people familiar with the process of deliberation the bill being discussed is as lacking of ambition as the Spanish one. It seems that in Barcelona as in Madrid some people are very much afraid of losing their ships to the people’s rights. 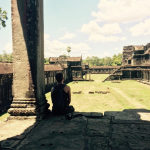 When Alejandro is not busy lecturing about negotiation and decision-making in the EU, he works on pushing for further freedom of information and data in Europe, and writes on his blog aribo.eu about this and many other issues. He can also be found on Twitter @aribo.

When Alejandro is not busy lecturing about negotiation and decision-making in the EU, he works on pushing for further freedom of information and data in Europe, and writes on his blog aribo.eu about this and many other issues. He can also be found on Twitter @aribo.