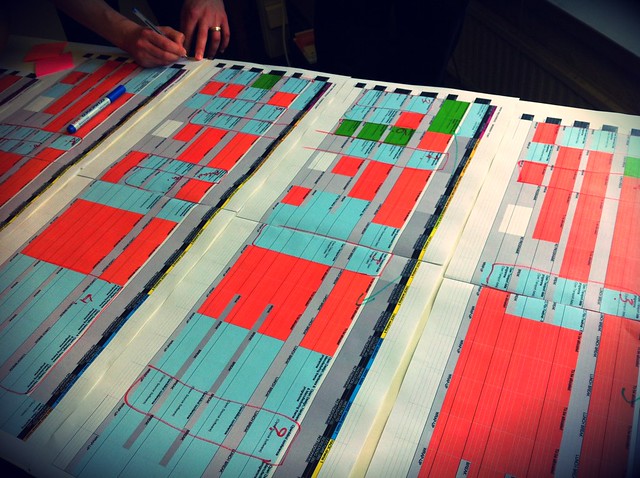 As the 2012 Open Knowledge Festival‘s organising team released Early Bird Tickets a few weeks ago from sunny Finland, we witnessed something exciting. The many experimental threads that have, until now, existed only as a complex web of planning based on two public Calls for Proposals (and a great deal of Skype meetings!) have starting to form something wonderful, and international communities are noticing.

Indeed, glimpses of OKFestival’s growing community of passionate folk are becoming increasingly evident across the Web. Our handmade ‘OKFestival in 14 Slides‘ Slideshare presentation has gone viral with over 30,000 views in the last two months alone, causing it to be featured on the homepage of Slideshare.net as its “Most Shared Presentation” of the week. Social media outlets are buzzing with conversation from across the globe on the festival’s Twitter and Facebook accounts and via hundreds of public #OKFest tweets. The list of confirmed festival attendees continues to grow daily with participants from Jyväskylä to Guyana.

An Action-Focused Schedule of Core and Satellite Events

To augment these community movements, OKFestival’s team of over 100 (largely volunteer-based!) Guest Programme Planners from around the world have been hard at work, finalising their diverse programmes for all 13 of the 2012 festival Topic Streams.
The Core Organising Team is confirming an increasingly-imminent list of Featured Speakers, from the Gapminder Foundation‘s Hans Rosling to Stanford University‘s Tanja Aitamurto to the Free Software Foundation‘s Karsten Gerloff and Urbanscale‘s Adam Greenfield.

The week itself, which combines the themes of our annual Open Government Data Camps (OGDCamp) and Open Knowledge Conferences (OKCon) into a series of participatory workshops, panels, hackathons, lectures and meetings, has continued to impress (and amaze!) all of us on the organising team. We have just confirmed the world’s first “Art of #OpenData Cooking” workshop. The ever-inspiring Open Development Topic Stream organisers have released a post explaining why the development community should come to Finland.

And from a Green Hackathon with CESC and the Open Knowledge and Sustainability Topic Stream, to Open Government Partnership-focused programming organised by the Transparency and Accountability Topic Stream, to hackdays themed around Building the Cultural Commons and #OpenScience, to Calls for Papers for Open Data Academic Research sessions and hands-on open hardware workshops in Finland’s first FABlab, to developer meetings about Open Source software with Finland’s OpenMind conference organisers, there is quite literally something for everyone.

Buy a Ticket, Join the Movement

Best of all, OKFestival Early Bird Tickets are now available at discounted rates until August 1st.

This year we offer both day and week tickets, with week-long tickets covering all of OKFestival’s action-packed core conference days from Tues Sept 18th to Thurs Sept 20th, with a summary and debrief day on Fri Sept 21st. A diverse variety of Satellite Events are also running before and after the event.

Having trouble making it to Helsinki? Earlier this summer, we also to release over 10,000 EUR in Travel Bursaries to help those with limited financial resources take part in the festival. With over 100 talented folk applying, choosing the final list of bursary recipients became an extremely difficult decision!

Given this, we are very happy to announce another round of Travel Bursaries for development practitioners, coders and new international guests thanks to Sida (the Swedish International Development Cooperation Agency), the Sunlight Foundation and other programme partners. Deadlines for this (last!) round of Travel Bursaries are the 1st and 8th of August, so we recommend applying soon. Applications can be found here.

Lastly, for students and other participants who want to get more involved in the festival itself in return for a free weeklong OKFestival ticket, we also offer the #OKFestCrew Volunteer Scheme, which slots potential crew members into positions fitting their skills and provides the opportunity to engage with the backstage planning that goes into the organisation of a major international festival.

Have questions for our Topic Stream planners or the Core Organising Team? Want to get involved by proposing a satellite or evening event? Feel free to contact us via the following email addresses here and say hi on Twitter. We’d love to hear from you – and in the meantime, we look forward to meeting everyone in Helsinki this autumn!

OKFestival 2012 runs from the 17th to 22nd of September in Helsinki, Finland. For more information, go to okfestival.org. You can also view festival planning photos in action at the OKFestival Organisers’ Flickr Album.