GOAL: You have six hours to make a working news app. There are three of you, a coder, a graphic designer and a journalist.

Yes. Five times in the last two years the biggest Finnish newspaper, Helsingin Sanomat, has invited people to do just this, at HS Open hack days, which I first talked about on this blog back in February. In the basement of our offices, groups of three have made data journalism that has even landed on the front page of Helsingin Sanomat. 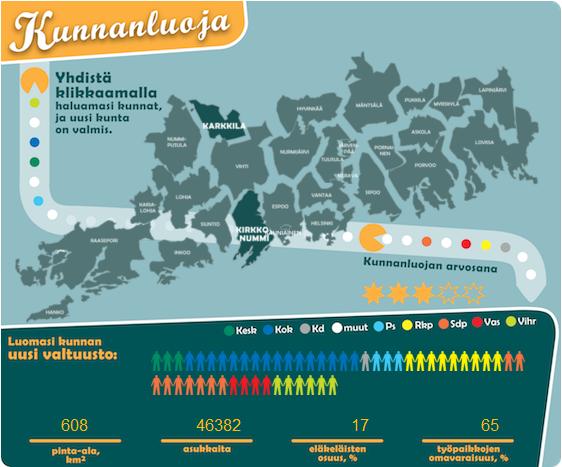 Kunnanluoja-game was created at HS Open. It shows what will happen population and political structures in Finnish cities if the government forces the cities to merge. Plans to force mergers of cities has been one of the hot topics in Finnish politics for a few years.

On Friday 21st September, Helsingin Sanomat will organize the sixth HS Open, at OK Fest. This time we are processing data from the Failed State Index and the World Bank. The data will be provided by Helsingin Sanomat, but groups can use any data they choose.

The goal is to make a News App: a 560×400 pixel program that can be embedded to any web site. It can visualize the data or gather news data from users.

Participants can sign up individually or as groups. We will divide the participants into teams with all the necessary skills. We hope that people will discuss their ideas beforehand. E-mail is good, but if you can meet up during OK Fest that would be great!

The purpose of HS Open is to learn a new trade, datajournalism. The News Apps you make are yours, but we hope that we will be able to buy the best apps and publish them on our site.

You can find out more details about the day and sign up here. Places are limited, so get in touch soon. Hope to see you there!