On August 24-25, another edition of OpenDataMx took place: a 36-hour public data hackathon for the development of creative technological solutions to questions raised by the civil society. This time the event was hosted by the University of Communication in Mexico City.

The popularity of the event has grown: a total of 63 participants including coders and designers took part and another 58 representatives from civil society from more than ten different organisations attended the parallel conference. Government institutions participated actively as well: the Ministry of Finance and Public Credit, IFAI and the Government of the Oaxaca State. The workshops were about technology, open data and its potential in the search for technological solutions to the problems of civil society.

The following proposals resulted from the discussions in the conference:

After 36 hours continuous work, each of the 23 teams presented their project, each based on the 30 datasets, provided by both the government and civil society organisations. As currently little open government data is available, the joint work of civil society was essential in order to realise the hackathon.

Read the Hackathon news in Spanish on the OpenDataMx blog here. 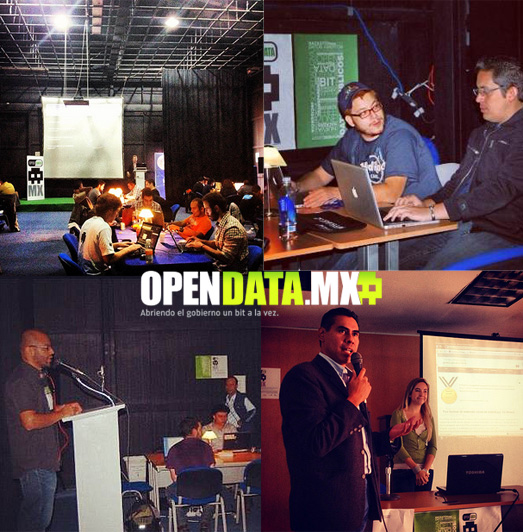 The first three projects were awarded money prizes ($30 000, $20 000 and $10 000 Mexican pesos respectively), allowing the teams to implement their project. An honorary mention was given to the project of the Government of the Oaxaca State and the Finance Ministry (SHCP) about the transparency of public works and citizen participation. The organisers of the hackathon also tried to link all teams to the institution or organisation relevant to their project in order to get support and advise for further steps. The organisers: Fundar, the Centre for Analysis and Investigations, SocialTIC; Colectivo por la Transparencia and the University of Communication would like to thank all participants, judges and speakers for their enthusiasm and valuable support in building the citizen community. 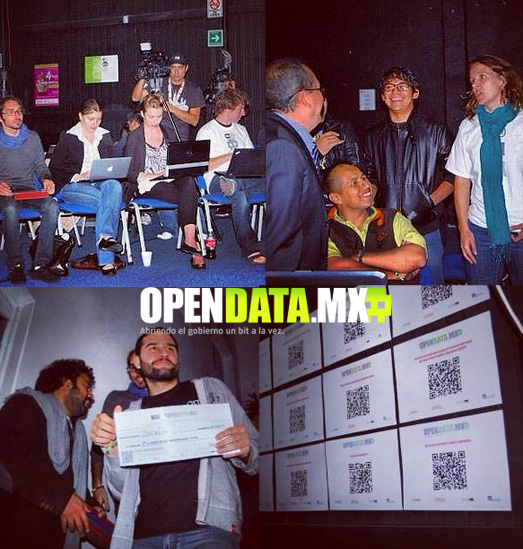 Here are some details about the winning projects:

Background to the problem: There are very few students who receive a government scholarship for higher education. Additionally, few students decide to continue their education to a higher level, less than 20% in all states. The idea is to support the students who do not have the means and enable the participation of civil society.

General Description: A small website for citizen participation, where users are asked to allocating spending to a type of urban mobility e.g. cars, public transport of bicycles, signalling their preference on where they would like the government to invest. After assigning one’s preferences, the users can compare them with the actual spending of the government and are offered multimedia material informing them about the topic.
Background to the problem: There is lack of information on how the government spends the money and the importance of sustainable urban mobility.
Technology and tools used: HTML, Javascript, PHP, Codeigniter, Bootstrap, Excel and SQL

Name of the Project: DiputadoMx | http://www.tudiputado.org/
General Description: An application that helps you find your representative by geographical area, political party, gender or commission he or she belongs to. The application is compatible with desktop and mobile technology.
Background to the problem: Lack of opportunity for citizens to communicate directly with their representatives.
Technology and tools used:  HTML5, CSS3, JQUERY, PYTHON , GOOGLE APP ENGINE, MONGODB

General Description: Open Public Works is an open government tool, conceptualised and developed by the Government of the Oaxaca State and Ministry of Finance (SHCP). This platform is created in order to make public works more transparent, presenting them in a simpler language and encouraging citizen oversight from the users community. Open Public Works seeks to create state transparency policy of the 3rd generation in the three levels of governance. This open source platform is also meant as a public good that will be delivered to the various state governments to promote nationwide transparency, citizen participation, and accountability in the public works sector.

Background to the Problem: There is lack of transparency in the infrastructure funds spending by the state governments. The citizen is not familiar with basic information about public works realised in their community and no mechanisms for independent social audit exist. Moreover, state control bodies lack the ability to control and supervise all public works. Public participation in the control of public resources is essential to solve this situation, where society and government should work together. Additionally, there is no public policy cross all three levels of government for the transparency of this sector. Finally, the public lacks too§ls and incentives to monitor, report and, if necessary, denounce the use of public resources in this very nontransparent government sector.

Photos and content thanks to Federico Ramírez and Fundar.

9 thoughts on “OpenDataMx: Opening Up the Government, one Bit at a Time”