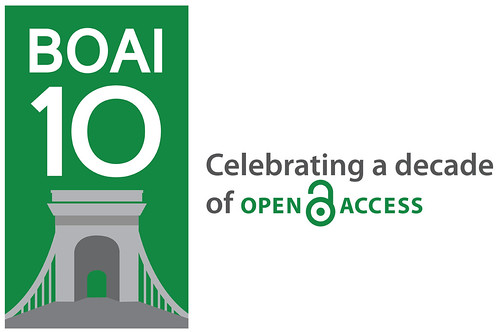 The notion of open access – or making research freely usable by all, without cost or legal barriers – has been in the news quite a bit this year.

It received significant media coverage on the back on the so-called Academic Spring, and subsequent high profile activities and announcements in the UK, the US and the EU.

One of the most significant milestones for open access advocates in the recent past is the Budapest Open Access Initiative, an international conference which convened experts from around the world to build consensus around a shared definition of ‘open access’. It is widely referred to as one of the defining events in the history of open access advocacy.

Ten years after this event, a diverse group of academics, advocates, librarians, and legal and policy experts met in Budapest. Today the group has issued a series of new recommendations for the next ten years of open access.

Some of the prefatory remarks to the recommendations are worth quoting in full:

Today we’re no longer at the beginning of this worldwide campaign, and not yet at the end. We’re solidly in the middle, and draw upon a decade of experience in order to make new recommendations for the next ten years.

We reaffirm the BOAI “statement of principle,…statement of strategy, and…statement of commitment.” We reaffirm the aspiration to achieve this “unprecedented public good” and to “accelerate research, enrich education, share the learning of the rich with the poor and the poor with the rich, make this literature as useful as it can be, and lay the foundation for uniting humanity in a common intellectual conversation and quest for knowledge.”

We reaffirm our confidence that “the goal is attainable and not merely preferable or utopian.” Nothing from the last ten years has made the goal less attainable. On the contrary, OA is well-established and growing in every field. We have more than a decade’s worth of practical wisdom on how to implement OA. The technical, economic, and legal feasibility of OA are well-tested and well-documented.

Nothing in the last ten years makes OA less necessary or less opportune. On the contrary, it remains the case that “scientists and scholars…publish the fruits of their research in scholarly journals without payment” and “without expectation of payment.” In addition, scholars typically participate in peer review as referees and editors without expectation of payment. Yet more often than not, access barriers to peer-reviewed research literature remain firmly in place, for the benefit of intermediaries rather than authors, referees, or editors, and at the expense of research, researchers, and research institutions.

Finally, nothing from the last ten years suggests that the goal is less valuable or worth attaining. On the contrary, the imperative to make knowledge available to everyone who can make use of it, apply it, or build on it is more pressing than ever.

If you believe in open access, the following four sections are worth reading in detail – and contain lots of ideas on policy, licensing, infrastructure, sustainability, and advocacy.

Following are a couple of excerpts that might be of particular interest to readers of the OKFN’s blog.

Firstly, while there have been no shortage of debates about the legal and practical meaning of ‘open access’ and associated questions of licensing and strategy (resulting in various inflections: strong/weak, libre/gratis, green/gold, etc), the recommendations contain a clear endorsement of a strong conception of open access which only requires attribution with the CC-BY license (which is compliant with the Open Knowledge Foundation’s Open Definition):

2.1. We recommend CC-BY or an equivalent license as the optimal license for the publication, distribution, use, and reuse of scholarly work.

Secondly, they explicitly suggest that open access advocates should more closely coordinate with advocacy for other forms of openness: