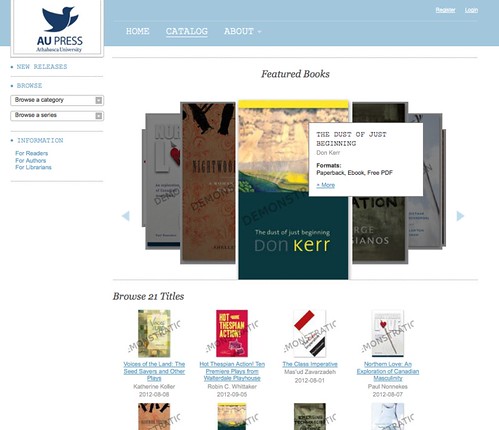 Today the Public Knowledge Project (PKP) released a new piece of software called the Open Monograph Press. As it says in their press release:

OMP is an open source software platform for managing the editorial workflow required to see monographs, edited volumes, and scholarly editions through internal and external review, editing, cataloguing, production, and publication. OMP will operate, as well, as a press website with catalog, distribution, and sales capacities.

Why does this matter? Several years ago the PKP launched a project called Open Journal Systems which helps users with the the management, editorial and publication of journals.

The project was founded in response to the rising costs associated with running and managing journals – which ranged from tens of thousands to millions of dollars, excluding peer review. Substantial amounts of these costs were administrative in nature – including software and system costs. One study suggested that the average cost of publishing an article “excluding noncash peer review costs”, was around $3,800 (for more details see this paper).

Now the open source Open Journal Systems software helps thousands of scholars around the world (over 11,500 as of December 2011) to edit and publish journals themselves – dramatically reducing the cost of starting and maintaining a scholarly journal.

The UK government’s recently announced plans to open up publicly funded research have had a luke warm response from some quarters, partly as millions of pounds of taxpayer’s money that would otherwise be spent on research has been earmarked to pay major publishers £2,000 processing fees per article.

Open Journal Systems enables scholars to start and run academic journals by themselves – doing peer review, editorial, and publication as part of their academic roles and cutting administrative costs. This means that more research can be made freely available on the web, and potentially frees up cash that might otherwise have been spent on article publication fees to subsidise more research, or more academic jobs.

Hopefully the newly launched Open Monograph Press will have a similar impact in cutting costs associated with publishing scholarly monographs, and will encourage the publication of more open access monographs on the web.