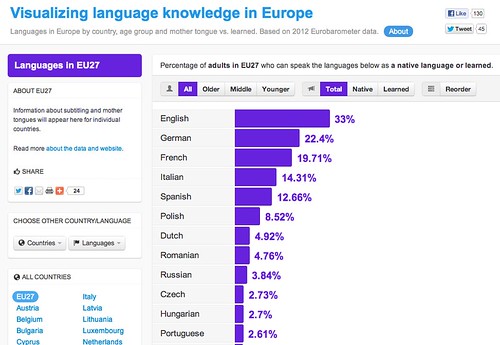 Jonathan Van Parys of Where’s My Villo? fame got in touch to tell us about a nice little mini-project he’s just launched to coincide with the European Day of Languages, which is today:

Launching on the 2012 European Day of Languages, languageknowledge.eu is a new website that visualizes language knowledge in Europe based on the latest European Commisson survey data, published this summer in the “Europeans and their languages” Eurobarometer.

The interactive website allows visitors to find out which languages are most widely known in Europe, by country, age groups, and see the split between native speakers and people who learnt the language later in life. Visitors can also pick any language to see in which countries that language is most popular.

Here are a few interesting insights:

Choose any country or language on languageknowledge.eu to discover language knowledge statistics for your own place of living or mother-tongue.