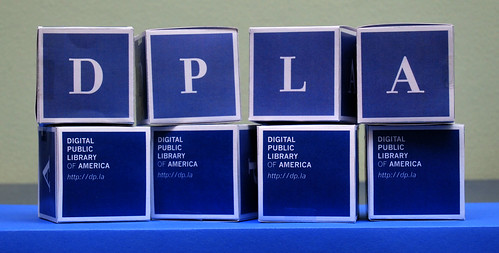 The Digital Public Library of America (DPLA) is an ambitious project to build a national digital library platform for the United States that will make the cultural and scientific record available, free to all Americans. Hosted by the Berkman Center for Internet & Society at Harvard University, the DPLA is an international community of over 1,200 volunteers and participants from public and research libraries, academia, all levels of government, publishing, cultural organizations, the creative community, and private industry devoted to building a free, open, and growing national resource.

Here’s an outline of some of the key developments in the DPLA planning initiative. For more information on the Digital Public Library of America, including ways in which you can participate, please visit http://dp.la.

In the fall of 2012, the DPLA received funding from the National Endowment for the Humanities, the Institute for Museum and Library Services, and the Knight Foundation to support our Digital Hubs Pilot Project. This funding enabled us to develop the DPLA’s content infrastructure, including implementation of state and regional digital service pilot projects. Under the Hubs Pilot, the DPLA plans to connect existing state infrastructure to create a national system of state (or in some cases, regional) service hubs.

The service hubs identified for the pilot are:

In addition to these service hubs, organizations large digital collections that are going make their collections available via the DPLA will become content hubs. We have identified the National Archives and Records Administration, the Smithsonian Institute, and Harvard University as some of the first potential content hubs in the Digital Hubs Pilot Project.

Here’s our director for content, Emily Gore, to give you a full overview:

The technical development of the Digital Public Library of America is being conducted in a series of stages. The first stage (December 2011-April 2012) involved the initial development of a back-end metadata platform. The platform provides information and services openly and to all without restriction by way of open source code.

We’re now on stage two: integrating continued development of the back-end platform, complete with open APIs, with new work on a prototype front end. It’s important to note that this front-end will serve as a gesture toward the possibilities of a fully built-out DPLA, providing but one interface for users to interact with the millions of records contained in the DPLA platform.

Development of the back-end platform — conducted publicly, with all code published on GitHub under a GNU Affero General Public License — continues so that others can develop additional user interfaces and means of using the data and metadata in the DPLA over time, which continues to be a key design principle for the project overall.

We’ve been hosting a whole load of events, from our large public events like the DPLA Midwest last month in Chicago, to smaller more intimate hackathons. These events have brought together a wide range of stakeholders — librarians, technologists, creators, students, government leaders, and others – and have proved exciting and fruitful moments in driving the project forward.

On November 8-9, 2012, the DPLA will convene its first “Appfest” Hackathon at the Chattanooga Public Library in Chattanooga, TN. The Appfest is an informal, open call for both ideas and functional examples of creative and engaging ways to use the content and metadata in the DPLA back-end platform. We’re looking for web and mobile apps, data visualization hacks, dashboard widgets that might spice up an end-user’s homepage, or a medley of all of these. There are no strict boundaries on the types of submissions accepted, except that they be open source. You can check out some of the apps that might be built at the upcoming hackathon on the Appfest wiki page.

The DPLA remains an extremely ambitious project, and we encourage anyone with an interest in open knowledge and the democratization of information to participate in one form or another. If you have any questions about the project or ways to get involved, please feel free to email me at kwhitebloom[at]cyber.law.harvard.edu.

Kenny is a project coordinator at the Berkman Center, where he works on the Digital Public Library of America planning initiative. Kenny contributes to research, coordinating efforts, and other programmatic work that helps to make a large-scale digital library free and open to all. He joined Berkman as a project coordinator in 2012 after having worked on the DPLA as a research assistant for a number of months.