A while back, we wrote about the kickoff of our project to deliver the budget of Bosnia and Herzegovina to its citizens in a form they can understand. Last week in Sarajevo we had the kickoff workshop, bringing together a group of techies and policy experts from the Balkans and Eastern Europe, the OpenSpending team and MySociety’s Tony Bowden to see how, through and beyond visualisation, we could work together to make budgets in the Balkans and Eastern Europe more transparent and accountable. 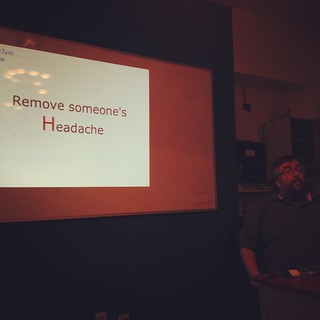 The OpenSpending team has spent a lot of time training journalists on how to use the both the OpenSpending platform and financial data in general, however this is the first time we’ve had the opportunity to train people whose aim was not necessarily to highlight scandal and sensation, but to systematically analyse and inform policy based on the available data. All of our participants had an additional aim besides improving policy: to answer the question “how do we display budget and spending information to citizens in a way that is engaging, meaningful and may even produce some action?”

We started the day with an introduction to Open Data, to make sure everyone was on the same page. The aim of the day was inspiration to make data projects as powerful as possible, so we opened with examples of data-driven financial projects which had really made an impact in society: The Farm Subsidies Project, The UK’s The MP’s expenses scandal, and Free the files Campaign by ProPublica.

After lunch, the participants were on stage to present their existing and proposed projects by way of further inspiration for the other groups in the room. We heard from Expert Grup in Moldova on their proposed project to convert the Moldovan BOOST data into a format which could be understood by citizens, CRTA from Serbia on PratiPare – a project to track the location and actual cost of a variety of projects in Serbia, ranging from schools to highways, Open Data Albania’s use of Linked Data to connect spending to a variety of different other sources of Data. Lastly, OneWorldSee and Centre for Public Interest Advocacy, Bosnia took to the stage, describing some of their past and up and coming projects, including CPI’s ‘Balkan Mythbusters’. We wait with anticipation.

After a great talk from My Society’s Tony Bowden on how to build a useful and world-/game-changing project, we gave a brief introduction to the OpenSpending project for those not familiar with it. We show that using OpenSpending doesn’t mean you have to produce a cookie-cutter version of Where Does My Money Go?, and in fact, we’ll get grumpy if you’re not more ambitious than that. There’s no licence (I’m aware of) to enforce this – but we want anyone who uses the Assembly Kit to build their own site to add something, however small, to make it better.

The theme of day 2 was how to convert data into action: how to find the times at which people will be receptive to your message, and how to create a narrative they will remember.

For the rest of the day we split into two streams – technical and policy. The policy stream thought about the areas they are interested in capturing in their projects, from international comparisons, to naming and shaming and then ask the key question: “Who cares?” – to work out who we should be targeting and via which medium. In particular we thought about how to make finance interesting to the public, and how to make data useful to those who already care about finance. Secondly, we did a deeper dive into some of the problems experienced by the various projects, including how to get the data you require when the people giving it to you know you are competent enough to find scandal in it.

Meanwhile, the technical stream split off for an action-packed day, including an introduction to DataWrapper for making simple charts and web visualisations, Kartograph for making elegant maps, and cleaning data using Google Refine. All before 5:30

The wrapup activity for Day 2 was a Dream Project proposal. If money and data were no object, what would the participants build? While the suggestion from the group from CRTA and Tony Bowden to build on their project tracking site by equipping kids with cameras to take pictures of broken parts of playparks was, I believe, intended largely jokingly, I can’t help wondering whether encouraging kids as part of their school projects to take part in these projects might not be a bad idea. Other large management consultancy companies use this technique and besides just collecting data, you are teaching the kids to be active citizens. I shall continue to ponder…

##Day 3 – Getting your message out

As a CSO, once you have done all of this work, how can you make sure it is used? The focus of Day 3 was getting your message out there.

The Policy Stream actually subdivided even further into Data Analysis and Public Relations for the day. The analysis group had a go at generating leads using in-depth analysis on some sample data, while the PR group tackled the tricky subject of getting your outputs used. Here’s a mindmap of some of our outputs:

We’d love to stay in touch and for other organisations to join the discussion on how we can take these projects all to the next level and hopefully collaborate even more internationally.

The two mailing lists we regularly use for this type of communication are:

Introduction to the workshop:

We’ll add more as we get them, still waiting for them to come trickling in!.

We hope to see you there soon!