On Friday, to coincide with Saturday’s International Open Data Day, the European Commission (EC) unveiled a new data portal, which will be used to publish data from the EC and other bodies of the European Union.

This major project was announced last year, and it went live in December for testing before today’s announcement. The portal includes extensive CKAN customisation and development work by the Open Knowledge Foundation, including a multilingual extension enabling data descriptions (metadata) to be made available in different languages: at present the metadata is offered in English, French, German, Italian and Polish. The portal was originally planned for EC data, but it will now also hold data from the European Environment Agency, and hopefully in time a number of other EU bodies as well. 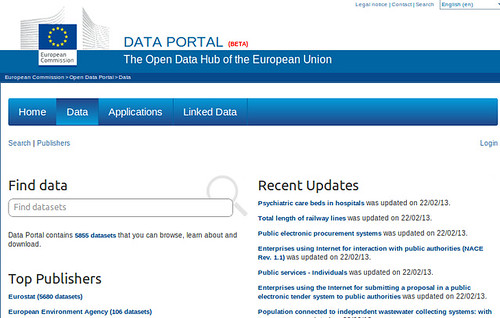 The EU has been a key mover in driving the Open Data agenda in member states, so it is fitting that it is now promoting transparency and re-use of its own data holdings by making them available in one place. It has for some years been encouraging member states to publish data via dedicated portals, and it also supports the OKF’s work on publicdata.eu, a prototype of a pan-European data portal harvesting data from catalogues across the Union, via the LOD2 research project.

The portal currently makes 5,885 datasets available, most of which come from Eurostat. In their blog post announcing the launch the European Commission say they are “confident that it will be a catalyst for change in the way data is handled inside the Commission as well as beyond”, and promise more to come:

More data will become available as the Commission’s services adapt their data management and licensing policies and make machine-readable formats the rule. Our ambition is to make an open licence applicable across the board for all datasets in the portal.

Furthermore, in 2013, an overarching pan-European aggregator for open data should federate the content of more than 70 existing open data portal initiatives in the Member States at national, regional or local level.