We were delighted to see that the plan includes using open data to tackle climate change.

In particular it announces a new ‘Climate Data Initiative’, which is described as follows:

Consistent with the President’s May 2013 Executive Order on Open Data – and recognizing that freely available open government data can fuel entrepreneurship, innovation, scientific discovery, and public benefits – the Administration is launching a Climate Data Initiative to leverage extensive federal climate-relevant data to stimulate innovation and private-sector entrepreneurship in support of national climate-change preparedness.

This would inform the development of “a virtual climate resilience toolkit that centralizes access to data-driven resilience tools, services, and best practices”, including things like tools for risk-analysis for coastal areas.

There is also mention of assessing and addressing gaps in data about methane emissions and using energy data from Federal agencies to cut their energy consumption.

While overall the new plan places an emphasis on using open data to prepare for climate change, we hope that the Obama administration will also recognise the role of carbon emissions transparency in trying to prevent climate change – by tracking emissions and holding big polluters to account as well as by monitoring changes in the environment and weather.

There is no doubt that Obama will be facing significant opposition to his plans from Congress, and hence he will still have a long fight ahead of him to implement many parts of it. Increasing climate resilience and achieving emissions cuts in Federal agencies will be much easier wins than the vast task of reducing emissions from energy plants, which account for over two thirds of overall emissions in the US.

Obama needs to secure big cuts from big polluters – and he, they and we need to keep our eyes on the numbers to see whether progress keeps up with promises.

We hope his administration will continue to recognise the role of open data in holding polluters to account, as well as in increasing climate resilience and reducing federal energy efficiency. 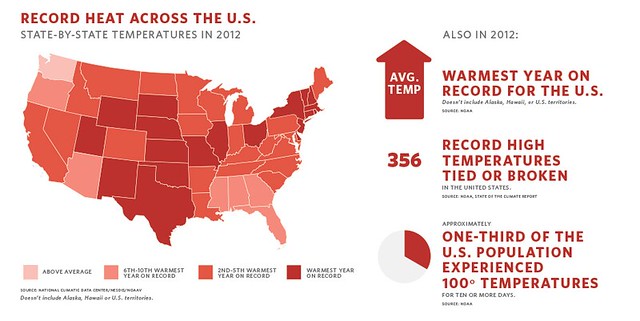 Image credits: “2012 was the second most extreme year on record for the nation” – detail from White House infographic to accompany Obama’s climate action plan.