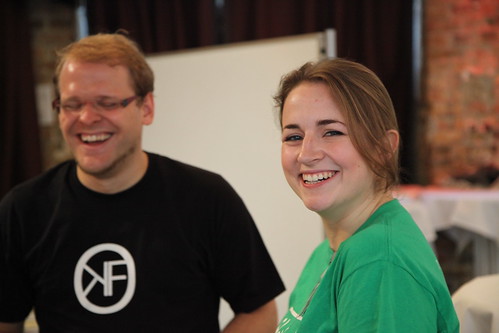 It’s once again time for a round-up of some of the major activities happening in our rapidly expanding Local Group Network across the world. This time we’ll among other be highlighting some of our newest groups and bring stories from Africa, Asia and Europe. Enjoy!

In Morocco, which is home to one of our newest Local Groups, the group coordinator Abderahman Zohry was invited on national television to discuss the Moroccan e-gov project with among other the Minister of Trade, Industry, and New Technologies, Abdelkader Amara. During the program they among other discussed open data, the CKAN data handling platform developed by Open Knowledge Foundation as well as the Moroccan Open Data Portal, and as a result the Local Group was subsequently invited to work with the government to help improve the platform.

Lots of media attention in Bangladesh…

In Bangladesh, where the OKF recently became established with an Ambassador, Nurunnaby Chowdhury Hasive, the launch received major attention across media. C News Voice, Comjagat and Priyo were among the many outlets covering the news.

The Spanish Chapter of the Open Knowledge Foundation has been organizing the first Conference of Data Journalism and Open Data in Spain, titled “When data tell stories”. The event took place simultaneously in Barcelona (CCCB + School of Communication Blaquerna) and Madrid (MediaLab Prado).

The event includes a Barcamp with data journalism projects that locals can learn from – as well as a Hackathon, which will take place in Madrid and Sevilla. There will be prizes for the best Data Journalism projects arising from this two-day challenge.
Additionally there will be practical workshops taught by experts who will teach participants how to use major tools for working with data.

From South Korea we are receiving reports of huge interest in open data and open government data these days. The new president Park Geun-hye recently confirmed that her government will open up data in various ways, including through open data portals, services, projects and more.

As a means to support these developments, the South Korean Local Group have been hard at work during the Spring showing examples and practices, as well as introducing several Open Knowledge Foundation projects.
Highlights include massive activity during Open Data Day back in February, a 12-hour hackathon in April (as well as another one in June), localizing Open Spending in Korean and, perhaps most notably, the launch of South Korea Data Hub, which is an open data platform running on the open source CKAN data handling system developed by Open Knowledge Foundation. The site is operated by the South Korean OKF Local Group community, but is also getting connected to other government portals such as the open data portal for the city of Seoul. This portal will soon be upgraded to CKAN version 2.0.

Additionally, the OKF Local Group also developed Seoul Linked Data Service, on the city of Seoul’s exemplary open data portal. The group will be sharing all data, documentation, and source codes, etc. (and they even run a a mirror site). Stay tuned for updates.

And in shorter news…

The Panton Principles have now, among other languages, been translated into Indonesian and Nepali. In Japan, the Local Group recently joined the Global Spending Data Party (alongside OKF Local Group Nepal) and will be hosting one of the coming events. In France, the Local Group Chapter organized an event with Etalab called “France Open Data taskforce”, that encouraged participants to re-design the data.gouv.fr portal. Over 15 designers and 15 open data users participated to imagine and design their ideal open data portal. Results to be presented online soon.

Great to see so many inspiring activities taking place in open knowledge and open data all over the world. We’ll be back shortly with more stories from the Open Knowledge Foundation community.