On Monday of this week, the Open Knowledge Foundation signed a memorandum of understanding with the BBC. The BBC also signed separate memorandums with the Europeana Foundation, the Open Data Institute and the Mozilla Foundation. 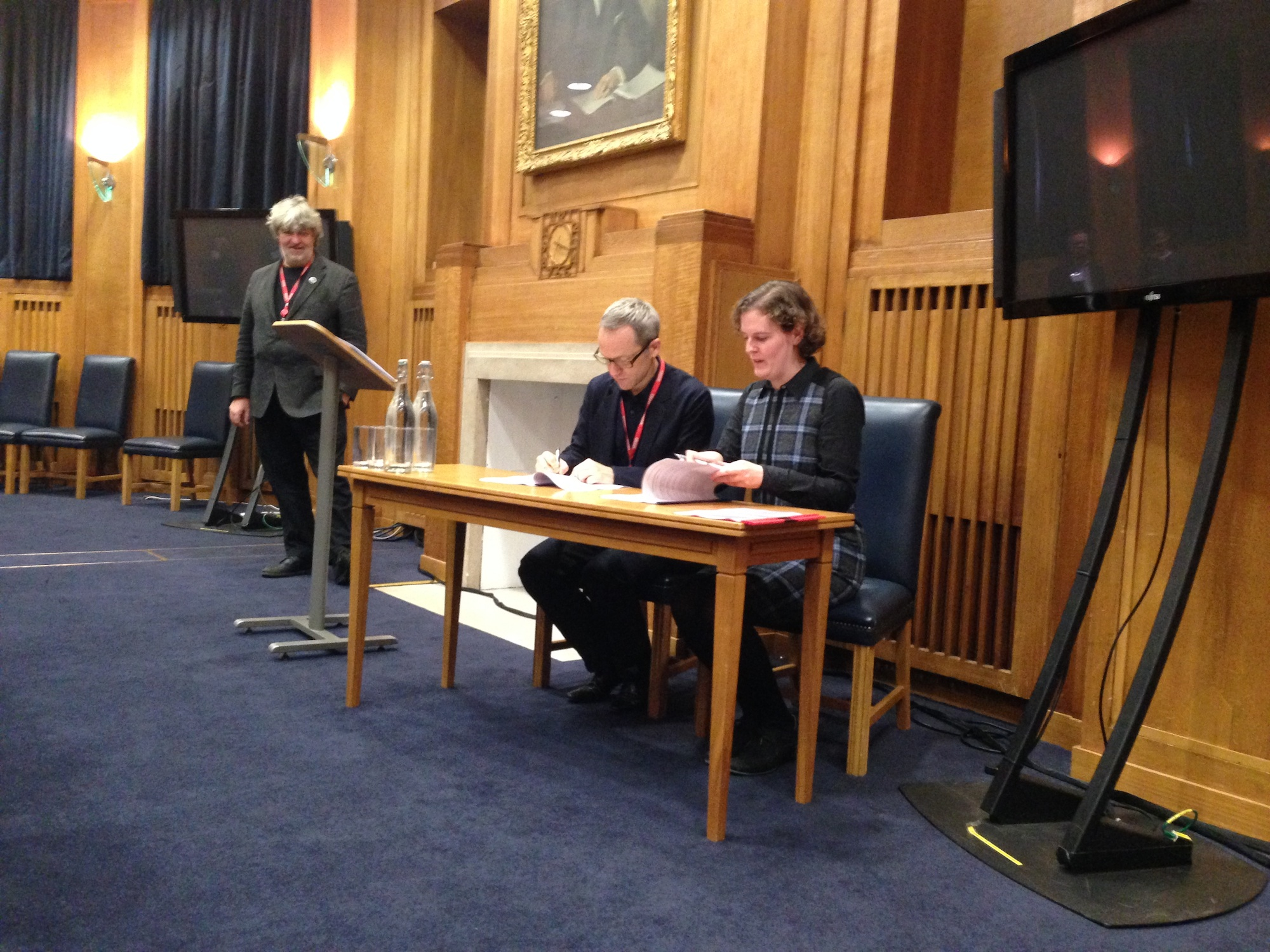 Laura James, CEO of the Open Knowledge Foundation, signs the MoU with James Purnell, BBC Director of Strategy and Digital.

The signing is an important step in cementing the relationship between the Open Knowledge Foundation and one of the world’s largest broadcasting organisations. It also marks a new commitment on the part of the BBC to embrace open data and open standards. James Purnell, Director of Strategy and Digital at the BBC, said that this memorandum signalled that the BBC was “here for audience’s interests and not just the BBC’s” and that through it the BBC plans to find “find new ways to engage audiences”.

The signing ceremony was a formal recognition of the work the five organisations had done together and paved the way for future collaborations, some of which are already in the pipeline. In January 2014, for instance, the Open Knowledge Foundation, alongside the BBC and the Wikimedia community, will be coordinating the first ever “speakerthon”. Using the BBC’s vast radio archive, participants will tag and select snippets of notable individuals’ voices in order to upload them to Wikipedia articles as open content. Developers at the BBC are keen to use the crowdsourced data to tag other parts of the archive and automatically identify where else a given individual is speaking. This initiative is a great demonstration of the kind of benefit open data and open content can have for an organisation like the BBC. It allows them to simultaneously use their rich digital archive to improve existing open resources like Wikipedia, whilst developing new and innovative ways to harness the power of their audiences to improve their own digital assets (in this case through crowdsourced voice identification).

Collaborations like the “speakerthon”, which enable audiences to be contributors as well as consumers of broadcast media, can be a cause for concern for cultural institutions, especially those like the BBC which were born in the heyday of industrial one-way broadcasting. I commend the BBC for taking these first steps to re-configuring the traditional relationship it has with its audiences in allowing them a more participatory role.

That is not to say that the idea of open is somehow alien to the BBC, quite the opposite. The BBC has a long history of supporting technological innovation and using the benefits it bring to improve access to information. Indeed, in its Charter the BBC sets two of its central purposes: “to sustain citizenship and civil society” and “to help to deliver to the public the benefit of emerging communications technologies”. In signing the memorandum of understanding on Monday, the BBC is affirming that it sees open data, open content and open standards as the key to connecting these two principles that are so deeply entrenched in its DNA.

As Bill Thompson, Head of Partnership Development at the BBC archive, said on Monday the memorandum marks only the first step in a long conversation between the five organisations. The challenge is to turn these words into actions and concrete collaborations that will unlock the potential of the BBC’s vast archive of culturally and historically-significant material.

What kind of collaborations between the BBC and the Open Knowledge Foundation would you like to see? What do you think are the possibilities for audience participation and technological innovation using open data at the BBC? Send us your ideas in the comments.