At the first meeting in Glasgow of Open Knowledge Foundation Scotland it was good to see some familiar faces from the ‘Open Badges in Scottish Education Group‘ (OBSEG). A little twitter conversation afterwards with Sheila MacNeill and Lizzie Brotherston, and we had agreed that openbadges for OKF Scotland was something that we definitely wanted to do. 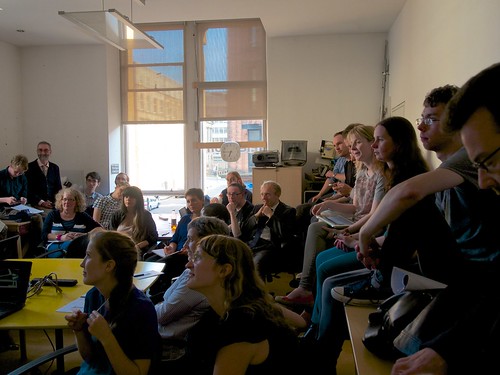 I started by playing around with the iPad App version of Badge Designer on openbadges.me. It was a bit footery at first but once I’d gotten the hang of it I realised that playing with what was possible wasn’t simply a process of skills development but was also a process of working out what I wanted to be possible. So whilst it was easy enough to design individual badges I needed to think about the place of each individual badge within the proposed badge eco-system. 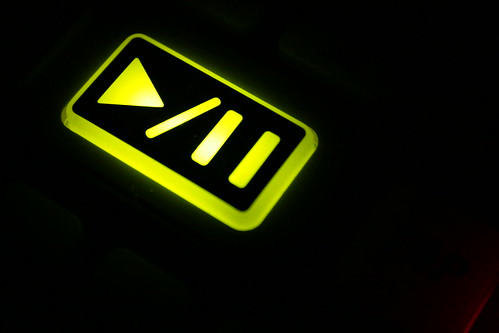 Before getting to the point of deciding what each badge looked like however, it was necessary to consider a number of questions,

The answer that I came up with to the first question was that everybody involved should get a badge. This meant that there would be a badge for the speakers who did the lightning talks, the people who turned up, and the people who organised the group.

I can appreciate that someone might make the argument that says the organisers and the speakers do more ‘work’ than an attendee but that’s to see the audience as simply passive recipients of the speaker’s knowledge. It’s an outdated idea of audience, and the amount of tweets both during and after the first meeting testify not solely to the audience’s enthusiasm but to the construction of the community that will (hopefully) want to reconvene at the next meeting. It’s also the case that within hours of the first meeting Lorna Campbell had storifyed it whilst Martin Hawksey had collated tweets featuring our #OpenDataGLA. This active participation on the part of the “audience” begged the question as to whether someone who simply turned up out of curiosity should also get a badge. It was thinking about that question, and the word ‘get’, that I started to think about using the phrases of “earning a badge”, or “claiming a badge”. However, I think it needs to be acknowledged that someone who comes to every OpenDataGla meeting but doesn’t present a lightning talk or tweet is nevertheless actively contributing to the group. So the view that I’ve now comfortably settled into is that everyone involved in OKF Scotland has a role to play in making it work, and that each role, consequently, deserves acknowledgement.

To achieve this horizontal arrangement my first idea was that the design of each badge would have to be such that one wasn’t any “better” than any other. This doesn’t accord with the badge design rubric by Peter Rawsthorne where there is a clear hierarchy from ‘Introductory’ through to ‘Exemplary’. As far as I understand this though, the rubric is more specifically applicable to tasks or achievements which are increasingly more difficult, complex or demanding. Asking myself whether Rawsthorne’s hierarchy applied to OKF Scotland question helped me realise that the answer isn’t straightforwardly interrogative. During my preparations for my lightning talk at OpenDataGla/2 I asked a couple of the participants who took part in the Glasgow Women’s Library/WMUK editathon, Scottish Women on Wikipedia, if they’d come along and say a few words. I hadn’t intended to put the person under any pressure or obligation but for one person, who hates public speaking, this was a terrifying suggestion.

This situation helped me realise that whilst speaking to a room full of people is something of an everyday occurrence for me for this other person it was an absolute nightmare. What I think this means, in terms of badge design for a community, is that if that person had come along and managed to speak they would have experienced the badge as something that they had really gained rather than something they had simply been given, and that therefore the meaning of the badge will be regarded in their relative terms, regardless of the conceptual design. For me this means that there is no particular need in this case to embed a hierarchy of achievement because the actual badge earners will have their own personal take on each badge’s value.

Between starting this post, which is a number of months ago, and now, December 2013, it seems that the OKFN have started the process of refreshing their brand design. In a sense it doesn’t really matter because my general idea was that the design of the openbadges would closely follow the OKFN logo design.

The ones I’ve done so far all have the same basic design shape with a different icon and different text on the banner. I wanted to use the Open Knowledge Foundation’s colour scheme and I tried to get the hexadecimal codes from the OKFN website but in the end it didn’t matter because the openbadges.me palette is limited to the colour options that it provides. We just ended up picking what we thought was the closest.

I haven’t answered all the questions that I set out in this post, and there a number of other areas that need to be covered like issuing, and the content of the metadata but for the moment I just want to use this post to get the conversation going and see if it’s worthwhile pursuing.

This work is licensed under a Creative Commons Attribution-ShareAlike 3.0 Unported License. However, the media used in this post is licensed with different CC licences. If you do share this work please respect the conditions of these different licenses.