From 13 to 18 January the Electronic Frontier Foundation (EFF) is organising Copyright Week, an event focused on promoting six key principles for guiding copyright policy and practice. Each day is dedicated to one of the principles, and today is ‘Building and defending a robust public domain’. This post is preceded by another one on the OpenGLAM blog.

Many people recognise the value of works which are in the public domain and may even be familiar with many initiatives that provide access to public domain works (such as the Internet Archive, Wikimedia Commons, Project Gutenberg, etc). Yet, many people do not have a very clear conception of what the public domain is or why it is important.

However, is often difficult to determine whether a work has fallen into the public domain in any given jurisdiction, because the terms of copyright protection differ from country to country. And people are sometimes unclear about what can or cannot be done with works in the public domain. Copyright laws are complicated, and for the layperson it may not be clear how they apply in relation to a specific work. Though there are many international and multinational copyright agreements and copyright organisations, the exact details of copyright law vary from one country to another. Different countries have different legal systems and traditions – and copyright laws reflect these differences. Hence, given that works enter the public domain under different circumstances depending on the country, oftentimes the status of an individual work cannot be universally established. Rather, it needs to be evaluated on a case-by-case basis for every jurisdiction.

In order to make public domain determinations a less daunting task, the Open Knowledge Foundation has been working on the development of the Public Domain Calculators – a tool that enables people to determine the copyright status of a work (in the public domain, or not), thus helping users realize the value of artworks from the past.

A look into the past

The Open Knowledge Foundation began working on the first implementation of the Public Domain Calculators in 2006, then for the Public Domain Works project, whose goal was to identify sound recordings which are in the public domain in the United Kingdom, based on metadata provided by the BBC and private collectors. In 2007, as Public Domain Works began working with the Open Library project, the idea emerged to create a set of algorithms for determining the public domain status of a work in different jurisdictions.

After several years, thanks to the support of a large community of legal and technical experts, the public domain calculators of the Open Knowledge Foundation are now a functional piece of software which can help people determine the copyright status of a work. Based on the research done by Europeana Connect (a project funded by the European Community Programme eContentplus), the public domain calculators rely on a series of national flowcharts which represents the provision of copyright law in the form of a decision tree. For any given work, the public domain calculators can determine whether or not that work is in the public domain in any given jurisdiction by matching the bibliographic metadata attached to that work against the provisions of copyright law for that particular jurisdiction.
In terms of technology, the Public Domain Calculators of the Open Knowledge Foundation shares similarities with the those recently developed by Kennisland and the Institute for Information Law at the University of Amsterdam (IviR) in the framework of Europeana Connect. The main difference between the two is that the OKFN calculators have been designed to be completely independent from any user input and are therefore completely automated. This represents the most innovative aspect of this technology. By gathering the relevant metadata from a variety of databases, the public domain calculators only process the data necessary to identify the legal status of a work, so as to subsequently present them to the users upon request. 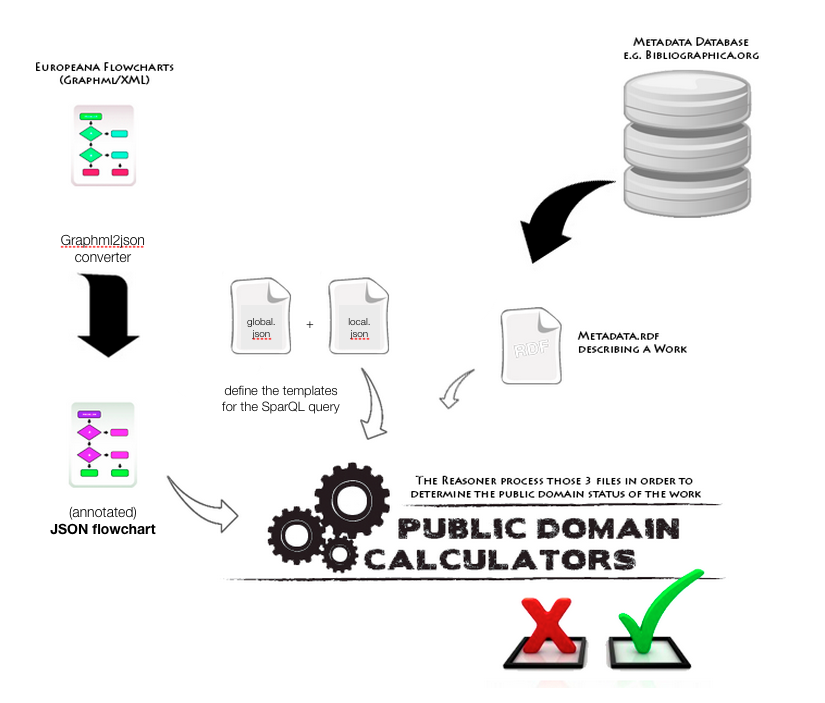 A glance into the future

The value of the Public Domain Calculators has recently been acknowledged by the French Ministry of Culture, which created a partnership with Open Knowledge Foundation France to develop a working prototype of the calculators for the French jurisdiction. In collaboration with two pilot institutions, the Bibliothèque Nationale de France and the Médiathèque de l’Architecture et du Patrimoine, the calculator will be presented as a pedagogical tool for the cultural sector to better understand the legal status of the works and the value of the metadata it produces.
In France, this comes at an important time, as we’re entering the time when most of the works produced by authors who died during the second world war would, theoretically, enter the public domain. Yet, French copyright law stipulates that authors who died during the war in the name of France have extended terms of protection. Hence, by applying the standard 70 years post-mortem rule, a number of works which are still eligible for copyright protection might end up being incorrectly assumed to be in the public domain. The public domain calculators represent a technological solution to help people identify whether or not these works have indeed entered into the public domain.
But the value of the public domain calculators extends far beyond highlighting the peculiarities of national copyright laws. Their objective is also to promote good practices within the cultural sector. Hence, in France, in addition to being a mere pedagogical tool, the calculators will also be employed as a benchmarking tool to help cultural institutions identify flaws and gaps in the structure or content of their bibliographical metadata, so as to ultimately increase the accuracy of the results.

We hope that other countries will follow the example of France, and that the potential of the public domain calculators as a means to promote good open data policies within the cultural sector will be appreciated by many other countries around the world.

Visit the website of Public Domain Calculator to learn more, and make sure to visit the Copyright Week website for full overview of the week’s posts and activities.