The Sinar Project in Malaysia is exploring ways of making critical information public and accessible to Malaysian citizens. The project is supported by the Open Data for Development (OD4D) programme and has been run in collaboration with OpenSpending at Open Knowledge International.

In our previous blog post, we provided an overview of the Sinar Project’s work opening budget data in Malaysia. In this second post, we would like to share what we learned through the urban poverty survey we conducted in Kota Damansara – a township located in Selangor. The survey was designed to collect information on the status and needs of citizens in this community.

“The survey was designed to collect information on the status and needs of citizens in this community…Our ability to understand [public housing] issues is severely limited by a lack of accurate, up-to-date data…”

The aim of this effort was to compare and contrast the allocation priorities of government at all levels with the on-the-ground reality of citizens living in public housing, often living below the minimum wage of MYR1,000 in Selangor state. Selangor has a reported median household income of MYR 6,214 and population distribution of 19.9%. Ultimately, our goal was to to use the data that we collected to advocate for better, more evidence based budget decisions.

Collecting and organising the data

There are a number public policy challenges facing public housing in Malaysia. For example:

Our ability to understand these issues is severely limited by a lack of accurate, up-to-date data. This is further complicated by the fact that it is difficult to gather budget information to understand how public funds are flowing between different levels of government and how they are intended to be used. Currently, it is very hard for policy researchers, journalists and civil society organisations to determine how allocated budgets relate to official government policies and how that translates to the implementation of government programmes on the ground.

One way to collect raw data on these issues is to run a social audit, a process of evaluating official records in order to determine whether reported expenditures match unofficial reports and surveys. The social audit process works in parallel to opening budget data and has proven effective at collecting the requisite information needed to begin to address the issues communities are facing. Our social audit was comprised of two components, an urban poverty survey and issue reports through AduanKu (a web application based on FixMyStreet). 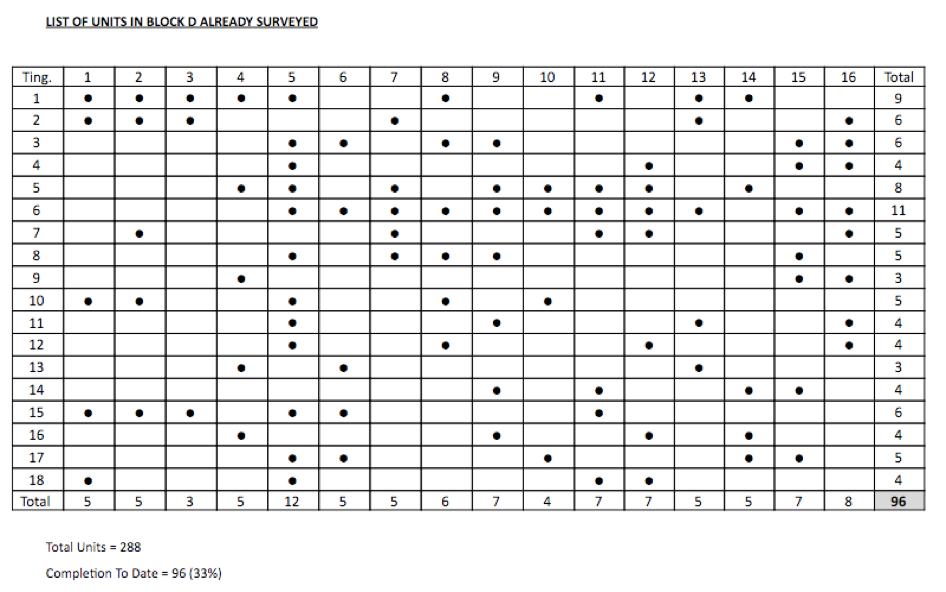 This only scratched the surface of potential information that we could collect but was sufficient for the goals of social audit. However, in conducting the survey, we identified a number of ways that the survey could have been improved both in terms of the structure and clarity of the questions. Data entry is an ongoing process and we will continue to make it publicly available on Malaysian Civil Society Open Data Portal.

A number of socio-economic indicators were collected and analysed through the urban poverty survey. The preliminary findings show that the average household size is 4 and average income per household is MYR1,500/month. Keeping in mind that the national minimum wage is MYR 1,000/month in Peninsular Malaysia and MYR 920/month in east Malaysia, a monthly household income of MYR 1,500 is low. 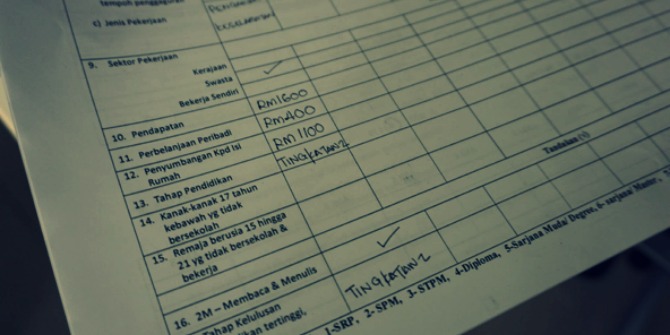 Examples of analysis from collected raw data are as follows:

To know more detailed breakdown of statistics in Kota Damansara public housing, you can read it from here. 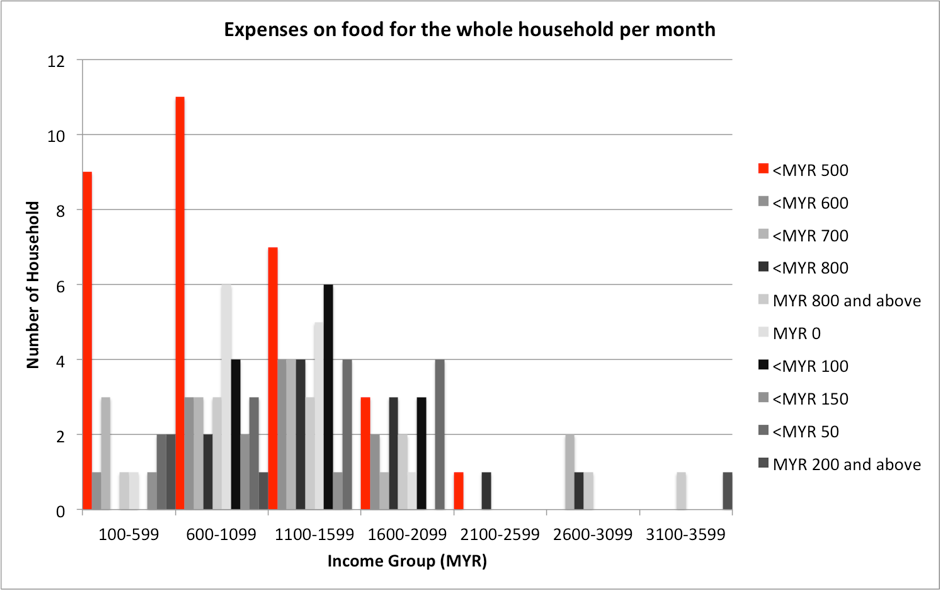 Issues reported in AduanKu – a web-based application based on FixMyStreet

In addition to the urban poverty survey, we set up an online application to report, view and discuss local issues. AduanKu allows residents to report broken infrastructure in public housing of Kota Damansara. To date, there are 18 reports from the PPR Kota Damansara zone. Once an issue is reported online, it is manually submitted to the responsible agencies, for example, the state-owned agency Property and Housing Selangor Sdn Bhd. We are continuing to collect issue reports as at present, the 18 reports collected are not considered strong enough evidence of the systemic problems faced by the residents in the housing block.

We were able to consult with the elected councillor for Zone 3 (PJU4 & PJU5) of Petaling Jaya, Shatiri Mansor, to roll AduanKu out to the whole of Zone 3. As a result of the roll out,  94 reports have been submitted online and these reports are under supervision of Zone 3 office. From 94 reports, 8 street problems have been fixed and this number continues to grow. However, while the Kota Damansara public housing premise is within the Zone 3 boundary, the land belongs to the state-owned agency Selangor State Development Corporation. As such, the broken infrastructure on the public housing’s premise is not under the jurisdiction of Zone 3 office and is instead under the jurisdiction of the Property and Housing Selangor Sdn Bhd.

Informing the authorities on our social audit findings

On behalf of public housing communities, a memorandum was submitted to the Selangor State Chief Minister at the Freedom of Information forum hosted by Centre to Combat Corruption and Cronyism (C4) and to the Speaker of Selangor at the Selangor State Legislative Assembly. As a follow up from the memorandum, a meeting was organised on August 8th, 2016 by the Board of Property and Housing Selangor to bring together several stakeholders to discuss issues faced by the communities.

The meeting gave us a forum to present concrete evidence to discuss how the budget allocated to the management company, Property and Housing Selangor Sdn Bhd (PHSSB), was being used. For example, PHSSB received MYR5 million to repair railings in all four blocks, according to 2014/2015 budgets for maintenance. However, through interviews with residents and inspection, it is not clear how these funds were used and what repairs were actually made. Many railings remain wobbly and unstable. Unfortunately, while we were able to raise these issues, authorities have maintained that we have not provided sufficient evidence to support claims raised by the communities.This demonstrates that we need to do more.

This highlights that communities still remain at a disadvantage due to inadequacy of the system. Even as we continue to collect our own data, where official government statistics are lacking, there is a risk that this evidence will not be accepted or deemed adequate by authorities. Nevertheless, the experience also demonstrates the need for transparency and the importance of Freedom of Information. For example, a list of expenses incurred by PHSSB that was obtained via a freedom of information request points to a potential discrepancy that might indicate that PHSSB is overcharging for water. Further investigation is necessary but the ability to gain access to official documents helps us know where to look.

In Malaysia, data journalism is in its earliest stages. Most data shared and visualised in media articles and research are not open data. With the results from the urban poverty survey and issue reports that we have gathered, journalists and civil society could use it as hard evidence to raise issues faced by communities on the ground, identify responsible agencies/elected representatives and place a spotlight on them. The template of the urban poverty survey is publicly available online. 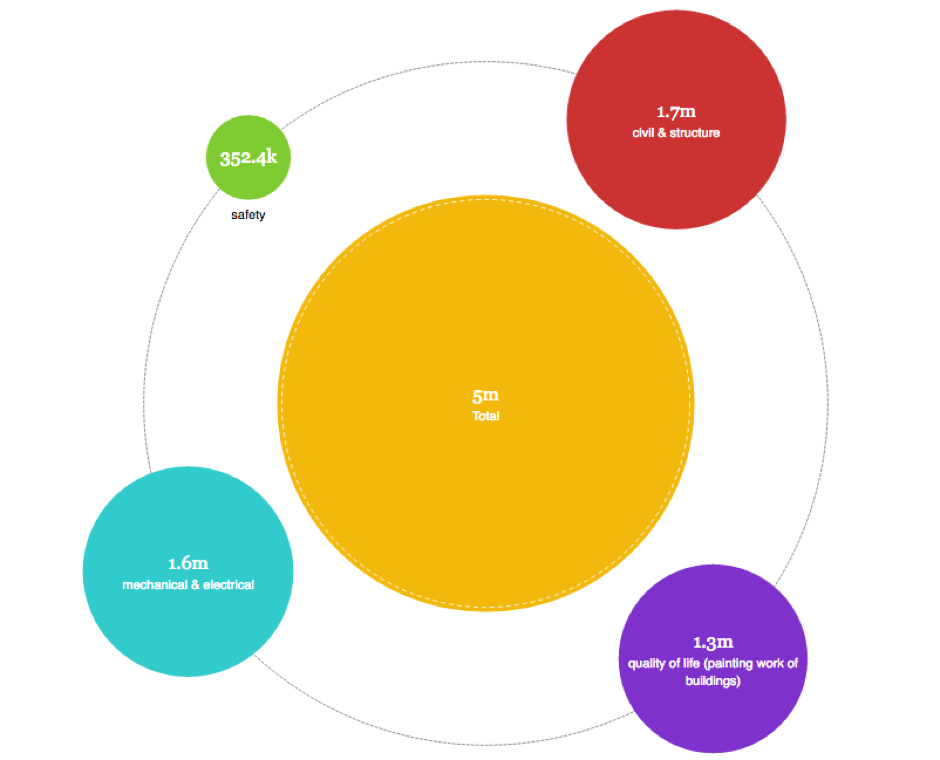 With limited access to expenditure information and contracts, tools to gather evidence should be used by the communities to hold government’s accountable. We think that urban poverty surveys and issue reports on AduanKu can help in the following ways:

In order to make the case to the elected representatives, public officials and the government about the reality on the ground, we will continue to collect evidence highlighting community needs.

2 thoughts on “Turning data into action: what we learned from conducting social audits on public housing communities in Malaysia”