If taxpayers pay for something, they should have access to the results of the work they paid for. This seems a very logical basic premise that no-one would disagree with, but there are many cases of where this is not common practice. For example, in various countries Freedom of Information laws do not fully apply to cases where governments outsource services. This would prevent you from finding out how your tax money has been spent. Or think about the cost of access to academic outputs resulting from public money: while much of the university research is paid for by the public, the academic outputs are locked away in academic journals, university libraries pay a lot of money to have access to these outputs, and the general public has no access at all unless they pay up.

But there is another important area where taxpayers’ money is used to lock away results. In our increasingly digitised societies, more and more software is being built by governments, or commissioned to external parties. The results of that work is in most cases proprietary software, which continues to be owned by the supplier. As a result, governments suffer from vendor lock-in, which means they rely fully on the external supplier for anything related to the software. No-one else is able to provide any adaptations or additions to the software, test the software properly to make sure there are no vulnerabilities, and the government cannot easily move to a different supplier if they are unhappy with the software provided. An easy solution for these issues exists: mandate that all software developed using public money is public code: stipulate in all contracts with external suppliers that the software they develop is released  under a Free and Open Source Software license.

This issue forms the heart of the Public Code, Public Money campaign the Free Software Foundation Europe launched recently. The ultimate aim of the campaign is to make sure Free and Open Source Software will be the default option for publicly financed software everywhere. Open Knowledge International wholeheartedly supports this movement and we add our voice to the creed: If it is public money, it should be public code! Together with all signatories, we call on our representatives to take the necessary steps to require that publicly financed software developed for the public sector be made publicly available under a Free and Open Source Software licence. 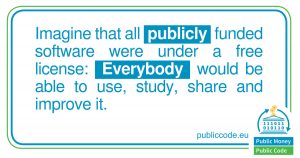 This topic is dear to us at Open Knowledge International. As the original developers and one of the main stewards of the CKAN software, we try to do our bit to make sure there is trustworthy, high quality open source software available for governments to deploy. CKAN is currently used by many governments worldwide (include the US, UK, Canada, Brasil, Germany, and Australia – to name a few) to publish data. As many governments have similar needs in publishing data on their websites, it would be a waste of public money if each government commissions the development of their own platform, or even pay a commercial supplier for a proprietary product. Because if a good open source solution is available, governments do not have to pay for license fees for the software: they use it for free. They can still contract an external company to deploy the open source software for them, and make any adaptations that they might want. But as long as these adaptations are also released as open source, the government is not tied to this one supplier – since the software is freely accessible they can easily take it to a different supplier if they’re unhappy. In practice though, this is not the case for most software in use by governments, and they continue to rely on suppliers for whom a vendor lock-in model is attractive.

But we know change is possible. We have seen some successes in the last few years in the area of academic publishing, as the open access movement has gathered steam: increasingly funders of academic research stipulate that if you receive grants from them, you are expected to publish the result of this work under an open access license, which means that anyone can read and download their work.

We hope a similar transformation is possible for publicly funded software, and we urge you all to add your signature to the campaign now! 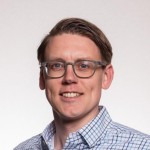 Sander is Programme Lead for Fiscal Transparency at Open Knowledge Foundation. Furthermore, he's responsible for the team at Open Knowledge Foundation that works in the areas of Research, Communications, and Community. Sander combines a background in Computer Science with Philosophy and has a passion for 'open' in all its form, ranging from open data to open access and open source software.

Sander is Programme Lead for Fiscal Transparency at Open Knowledge Foundation. Furthermore, he's responsible for the team at Open Knowledge Foundation that works in the areas of Research, Communications, and Community. Sander combines a background in Computer Science with Philosophy and has a passion for 'open' in all its form, ranging from open data to open access and open source software.